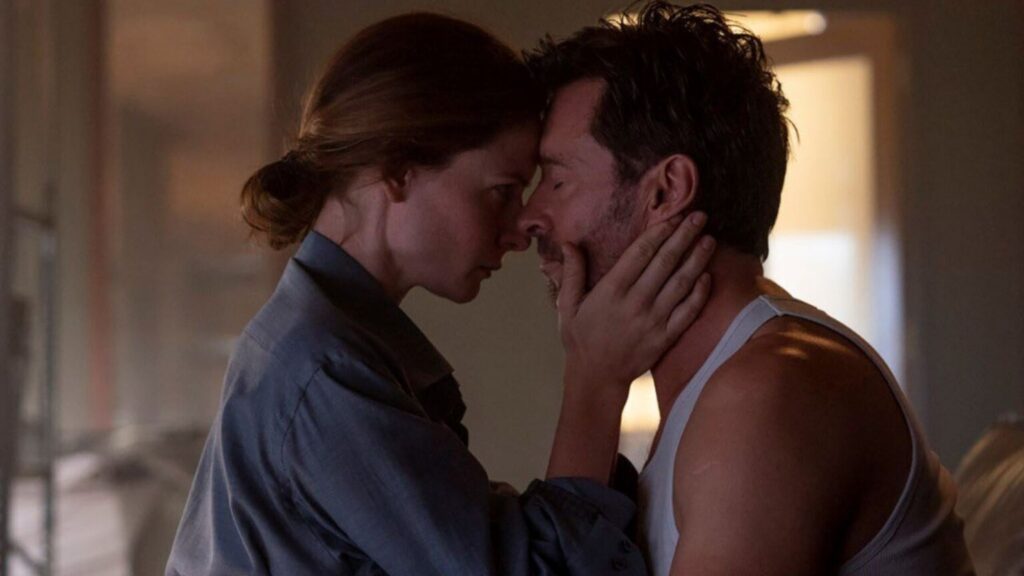 Written and Directed by Lisa Joy | 116 min | On Demand 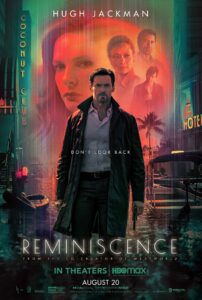 This shouldn’t work. It’s a hyper-stylized fantasy noir, deeply indebted to older — and let’s be straight here — better films, but there’s something about Reminiscence‘s commitment to its concept that raises it above being just another dystopic also-ran. It’s easy to see where it’s fraying slightly at the seams, struggling to hold together, while it still fulfills its ambitious, sentimental mandate. 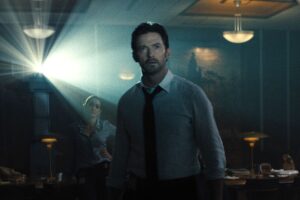 Hugh Jackman is Nick, a war vet with a permanent 5-o’clock shadow running a real sci-fi business, Reminiscence, a kind of isolation tank that allows users to plug into memories, to relive them in real time while Nick and his alcoholic  partner, Watt (Thandiwe Newton), watch. In the bad old days this device was used for interrogation — you can encourage the subject to remember specific details, and Nick’s an artist with this work. The local DA will occasionally ask him to consult on their cases, like an old-fashioned private dick poking around in people’s recollections. 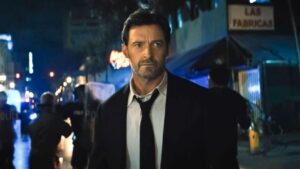 Nick and Watt live in post-apocalyptic Miami. This is a city where the wealthy “barons” live in walled-off, palatial estates far away from the encroaching ocean, while the regular folks either subsist in the flooded areas of town — which somehow still manage to be free of black mould and stay on the electricity grid — or in the just barely dry zones, which are expected to flood before too long. The future is a dark place, without much optimism, which is why sepia-toned nostalgia has become such a growth industry.

And of all the memory machine businesses in all the world, Mae (Rebecca Ferguson) had to walk into this one.

She’s lost her keys and needs a little help to remember where they went. She promptly strips down to her birthday suit right in front of Nick, but he’s too chivalrous to gawk. 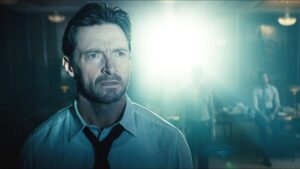 By the time she’s located the keys he’s already half in love with her, and as they get friendly — he goes to watch her sing in a flooded zone nightclub — we start to suspect she’s a woman with secrets. Her gorgeous red dress is a dead giveaway, like she’s wearing a sign that says: “Femme Fatale!”

He finally clues in when she vanishes without a trace, and he becomes obsessed with his memories of her, spending all his time in his machine like a compulsive masturbator.

The set-up for this mystery is so clunky, complete with hokey Original Cut Blade Runner voice-over, it’s easy to chuckle at its awkward self-consciousness, 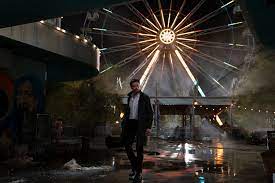 But, as we go along, the film’s earnest romantic spirit predominates. Jackman and especially Ferguson are plenty fetching, so it’s no effort to watch them spend time together. There’s also a lot to enjoy in the production design — in the interiors a bit more Adrian Lyne than Ridley Scott — and as we float over flooded cityscapes and glide along the very practical monorail lines, hypnotized by the neon reflected in the watery avenues, we also get to appreciate another terrific Ramin Djawadi score.

You’ll also find things to like in the film’s interlocking mystery plotting, involving a few other deeply broken characters — a dying oligarch (Brett Cullen), a lost woman from the flooded area (Angela Sarafyan), a New Orleans drug dealer (Daniel Wu), and a former cop gone bad (Cliff Curtis) — but Ferguson and Jackman are the beautiful centre of this ornate, artificial box of a movie, moving in close-up from one lovely tableau to another.

As Reminiscence‘s secrets are revealed  — some less surprising than others — and a few plot holes are left unfilled, the film remains undeniably entertaining.

Filmmaker Lisa Joy’s other prominent credit is the Westworld HBO series alongside Jonathan Nolan, and you can see the narrative and thematic parallels — the relationship between memory and identity, for example. This picture is nowhere near as violent, bleak, or opaque as that series, however. Reminiscence has the spirit of a romance novel tucked into its splashy, water-logged heart.

Reminiscence‘s secret weapon is Westworld‘s Newton as Watt. Not only does she provide the conscience to the whole thing, she gets to kick some serious ass in the movie’s only genuinely impressive action sequence.