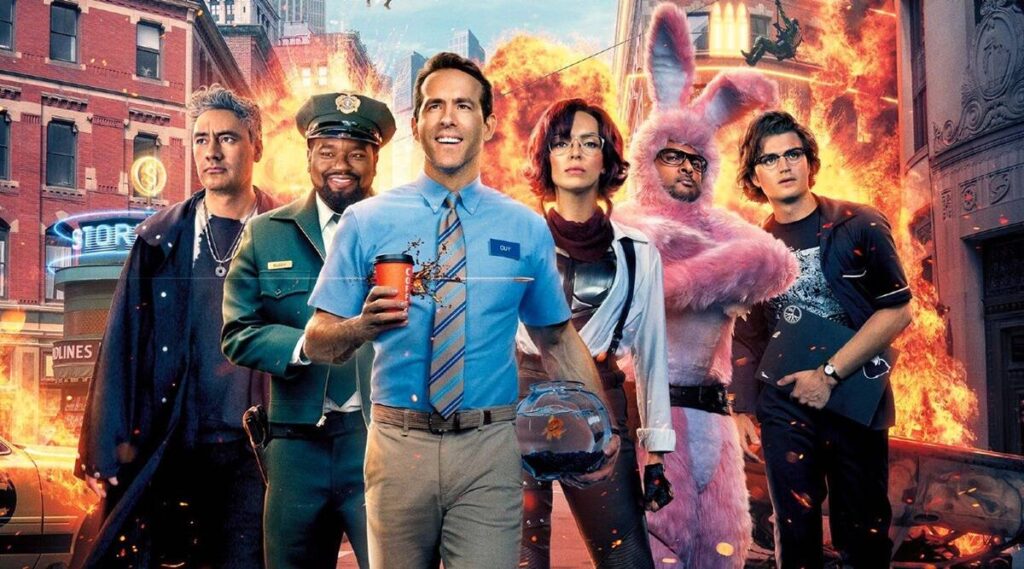 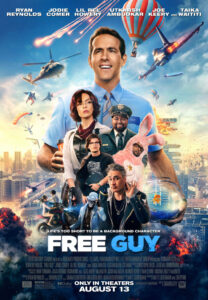 Free Guy is a mild and pleasant surprise. Like so many modern blockbusters, it’s imbued with the DNA of a bunch of other, better movies, but it still manages to distinguish itself by being both a big-budget original intellectual property and a fun time at the cinema. 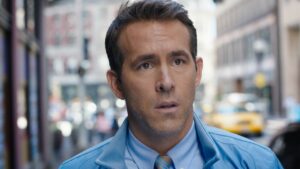 The player characters wear sunglasses and usually shoot people, having a loose relationship with the laws of Free City. Guy’s convinced these folks are heroes even as they rob the bank he works at every day forcing him and his best buddy, Buddy (Lil Rel Howery), onto the floor or killing them. No big deal when Guy dies. He just wakes up the next morning in his bed next to his goldfish. 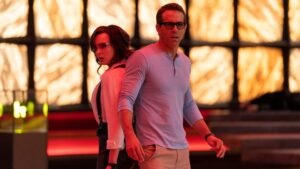 Yup, this might as well be Boss Level, except Guy has no agency. Then he meets Millie aka Molotov Girl (Jodie Comer), a Sunglasses Person, and immediately falls in love. That gives him the imperative to try new things, which leads Guy to getting his own pair of sunglasses. Once he can see the world around him — and the “money” to be made — he starts to save people from the interminable violence, which turns him into a star in the shared gameplay. This is until the actual nature of his existence is explained to him. 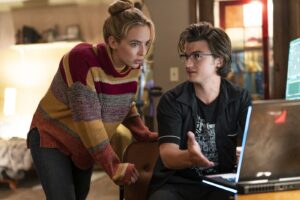 Meanwhile, in RL, Millie is a programmer. She’s been entering Free City looking for a  clue to an original code she and Keys (Joe Keery) created that they believe was stolen by Antwan (Taika Waititi, having a great time), the creator of Free City. Keys works for Antwan’s company, and is estranged from Millie since she launched a lawsuit hoping to make Antwan own up to his malfeasance. 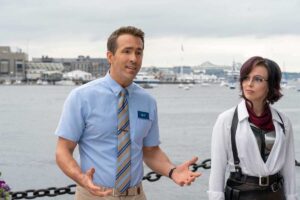 There’s a lot of joy here, especially for gamers, but you needn’t know much about video games to piece all this together. It has all the storytelling confidence and movement of a mid-80s Amblin feature, full of vivid characters and sharp gags. Those other movies it’s most indebted to include They Live, The Truman Show, and both versions of Tron, with shades of Brazil in the production design. We get a few familiar voices with the players (listen for Hugh Jackman, Dwayne “The Rock” Johnson, and Tina Fey), and a terrific Channing Tatum cameo.

We also get a few clumsy plot issues, but the tone is resolutely light — even when Guy has to face up to a powerful existential crisis like Rachel in Blade Runner. There’s no room for genuine heartbreak in a machine as cheery as this one. 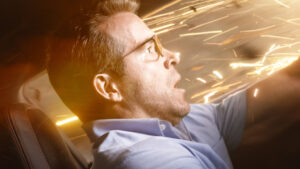 Beyond that the sticky marshmallow in this cinematic fluffernutter is the chemistry between Reynolds and Comer, both of whom bring a charm offensive. I’m not sure I believe the ending — who she ends up with — but maybe they’ll explore more complications in the inevitable sequel.

Which brings us to one of two outstanding problems with Free Guy. They’re small issues with an otherwise passable entertainment, but they bear mention since they’re both as much about the people who made the movie as the movie itself.

This is a picture that trumpets a certain individuality and even criticizes the idea of sequelization in its themes. Yeah, that’s pretty rich given how heavily Free Guy leans into its influences, but then they’ve doubled down on hypocrisy with the almost immediate announcement that Disney/20th Century Studios want to franchise this fucker. The movie is mostly open-hearted. Too bad about the producers.

The second problem is the cross-fertilizing synergies with other Disney IPs. I didn’t mind the Deadpool poster on the wall of a gamer’s bedroom — that’s a subtle enough easter egg. I’m talking about the direct homage, if you want to call it that, to Marvel and Star Wars that takes place in the third act. I know it’s supposed to be a knowing in-joke, but it comes off as gross, calculated, and even disrespectful, a chance for Disney to show off its content library. 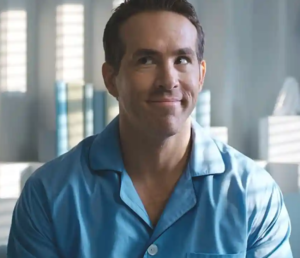 It’s a reminder that whatever good feeling Free Guy may elicit it’s also just another blockbuster product, this week’s cinematic Big Mac looking to get us to pay for Happy Meals along the way.