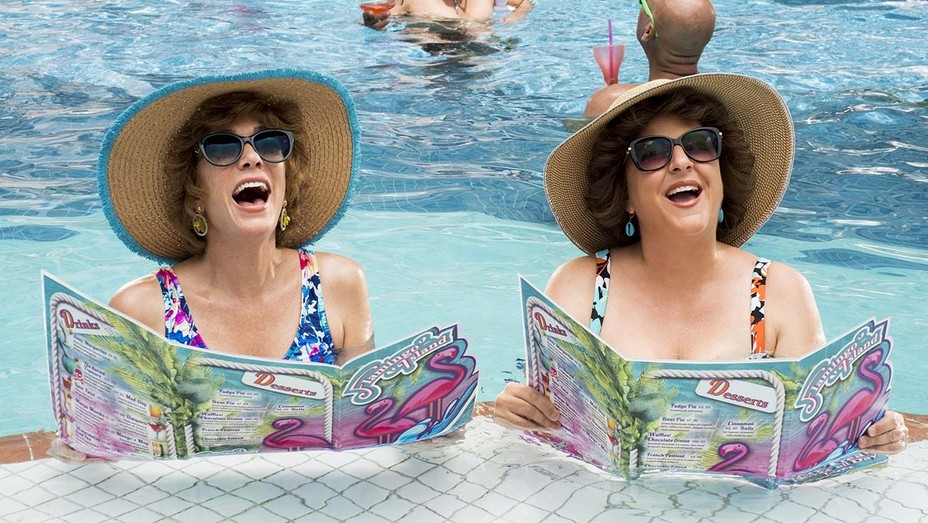 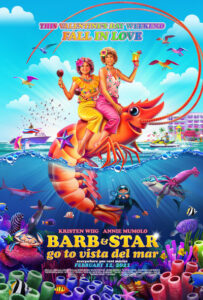 Barb and Star is a bonkers comedy about two middle-aged suburbanites who take a trip to the beach community Vista Del Mar, Florida, and have the time of their lives. They then get drawn into a plot to kill everyone at the 49th Annual Seafood Jam with deadly mutated mosquitoes.

Yep, you read that right. 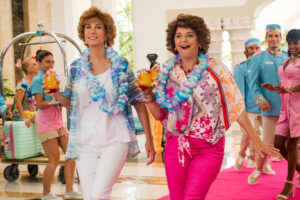 It starts with a paperboy named Yoyo (Reyn Doi) riding his route and singing Barbara Streisand’s “Guilty” (feat. Barry Gibb, of course), so you know you’re on the right track. When Yoyo enters a secret elevator in a tree, descending to a villain’s lair, you know it’s a lair because that’s what it says on the elevator button.

There he meets the real villain, Sharon Gordon Fisherman (Kristen Wiig, also writing), and her lackey and possible love interest, Edgar (Jamie Dornan, very game). Sharon has a real beef against the people at that Seafood Jam, hence the mosquitos. 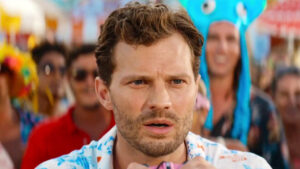 Then we get to know Barb (Annie Mumolo, Wiig’s writing partner here and from Bridesmaids) and Star (Wiig again), two best friends who live together and work together at a furniture store. When they lose their jobs, they decide to go on vacation to the Florida beach resort, to find their missing sparkle.

The first act here is dynamite, dead-on-target gags coming thick and fast. There’s an almost Austin Powers quality to the pace and plotting, without so many cultural in-jokes. Barb and Star have their own culture. Great to see another SNL veteran, Vanessa Bayer, as the head of Barb and Star’s friend group that they get kicked out of for lying, and it’s so sad because Barb and Star hate lying. They’re really good people. 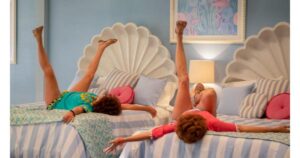 They’re also decidedly whack-a-doodle. Their plane trip to Florida is spent discussing their ideal person, named Trish, and her hero’s journey, which ends in a terrible and bloody self-sacrifice.

The arrival in Florida is celebrated by not one, but two separate song and dance numbers, and the welcome presences of Mark Jonathan Davis aka Richard Cheese, Damon Wayans Jr, Andy Garcia, and, as the Morgan Freeman-esque voice of a crab, Josh Robert Thompson, who is much missed as Geoff Peterson, Craig Ferguson’s talk show robot skeleton sidekick. 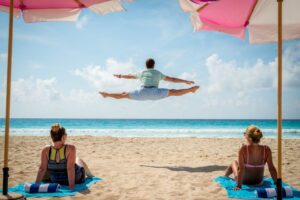 As with so many comedies, the initial energy just isn’t sustainable down the stretch, and Barb And Star does commit the sin of predictability into the third act — the inevitable falling out between the bosom buddies and the alligator threatening them on the edge of a cliff. And who didn’t see the life-saving properties of culottes? 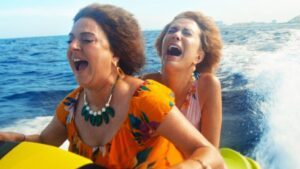 I kid, of course. Even if there are mid-movie longueurs, the deep, even aggressive commitment to real absurdity, along with the heart-fuzzying value of true friendship, that’s something nobody should besmirch, so I won’t. This is a besmirch-free zone. 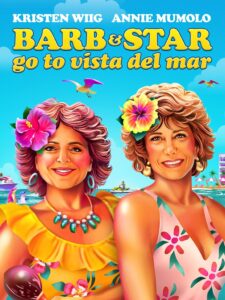 So, I really only have one question: Are you ready for your soul douche?