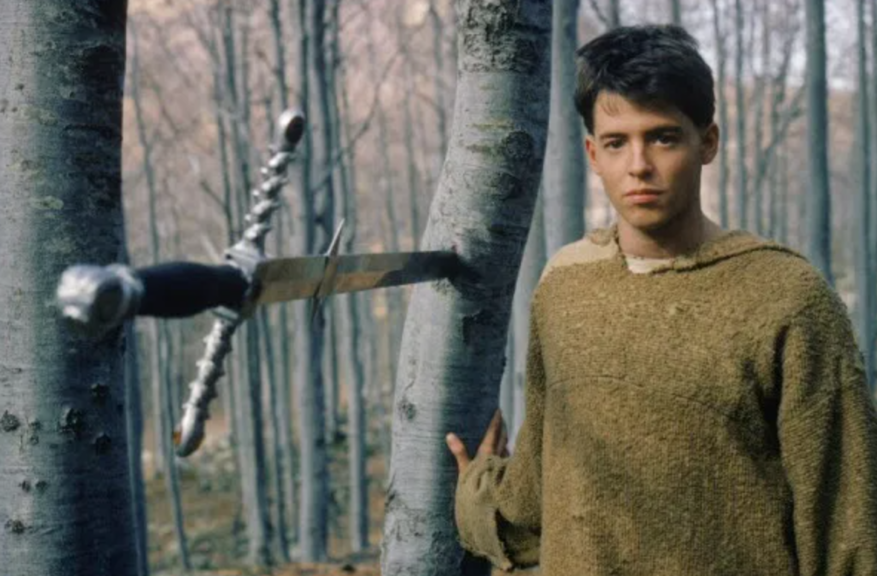 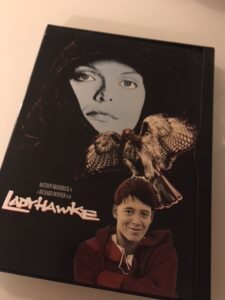 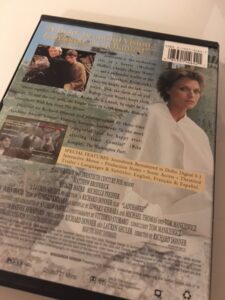 The other evening I plucked from my library a dusty disc of a film I hadn’t seen since I was a teenager, which says a lot about my habits as a collector — I pick up the odd DVD here and there but I don’t watch it right away. Who knows how long this has perched on my shelf, this old Warner box?  (I gather a better quality Blu-Ray does exist.)

The movie — by Superman and Lethal Weapon helmer Richard Donner — can be counted among the robust stable of 1980s sword & sorcery and fantasy pictures. It’s not the worst, either. Amongst its features is an odd combination of humour and romantic fairy tale, though more of the latter than the former.

The casting is perverse: Set in the 14th century, it stars Matthew Broderick, of all people, made a year before Ferris Bueller.

Broderick is Phillipe Gaston, also known as the Mouse, a wise-cracking thief and compulsive liar yet in constant conversation with his god. He escapes the supposedly inescapable dungeon at the medieval city of Aquila, setting the city guard after him, but he’s saved by a dangerous man, a fugitive himself, Captain Etienne of Navarre (the late, great Rutger Hauer in full swagger).

Navarre is the victim of a terrible curse, placed upon him by the Bishop of Aquila (John Wood), a man of the cloth not above messing with magic when it suits him. Jealous of Navarre’s love of the beautiful Isabeau (Michelle Pfeiffer), the Bishop turned Navarre into a wolf at night and Isabeau into a hawk during the day. At dawn and dusk they can see each other for a moment, but can never be together. 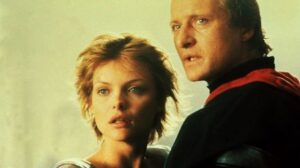 Gaston becomes a squire of sorts to Navarre and a passer of messages and a spinner of exaggerations between him and Isabeau as they all travel across the countryside, a motley crew of humans, birds, and wolves, depending on the time of day, encountering soldiers and wolf-hunters (Alfred Molina, briefly), eventually meeting up with a monk named Imperius (a very welcome Leo McKern), who might have a solution to the curse.

The narrative rambles — there’s no need for this thing to be as long as it is — and the synth rock score is atrocious, like it’s lifted from an early ’80s TV show. And yet the film has an unusual appeal that grows as it goes. As Gaston starts to understand Navarre and Isabeau’s pain,  he does his best to help them despite having no particular dog in this fight. His arc, from pickpocket to self-sacrificing hero, is the film’s heart. 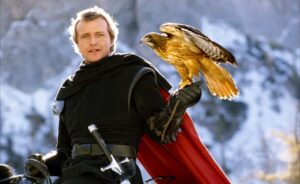 Everyone who meets Isabeau falls in love with her, and Gaston is no different. You can hardly fault him — Pfeiffer is luminous, shot by Vittorio Storaro close to the peak of both the lensmaster’s powers and the actor’s. Hauer’s plenty handsome and watchable, too. Combined with the scenery — filmed all over Italy, from the Dolomites to L’Aquila to Cinecitta Studios in Rome — and some terrific costumes in black, white, and red, there’s enough here here to make Ladyhawke an enjoyable revisit . But, maybe do yourself a favour and find that Blu-Ray.