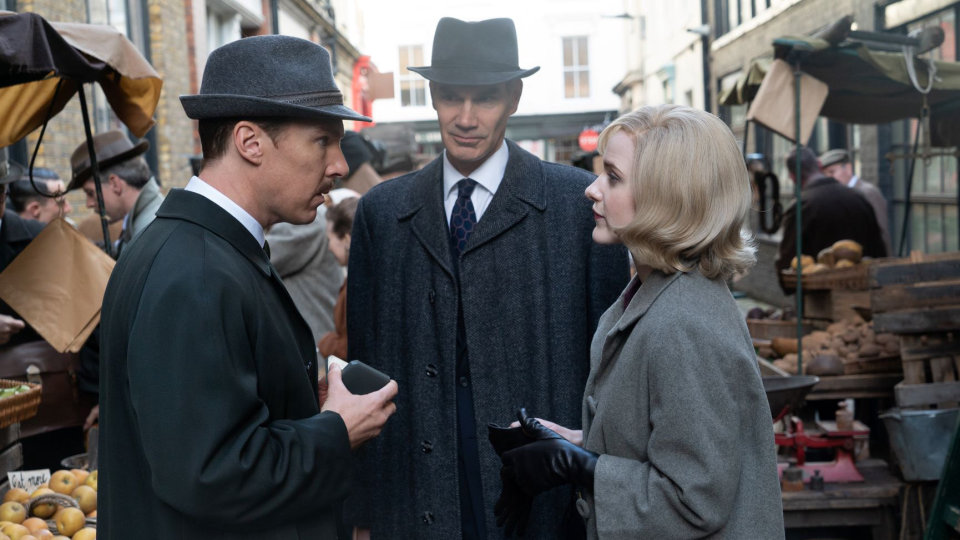 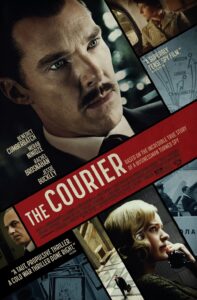 Greville Wynne (Benedict Cumberbatch) is a slightly tweedy, slightly goofy machine parts salesman in London in late 1960. He’s got no interest in opening up his business into the Soviet market with Khrushchev beating the drums of war and  double-agent, Pyotr Semyonovich Popov revealed and executed, souring relations further with greedy capitalists.

But, a contact at Whitehall encourages Wynne to set up a business meeting in Moscow with industrialist Oleg Penkovsky (Merab Ninidze), who has important information to share. Naturally, this won’t be a one-time deal: Wynne visits Moscow on the regular, and his home life  suffers — the sublimated anxiety and secret-keeping spills over into his relationship with his 10-year-old son and his otherwise loving wife, Sophie (Jessie Buckley). It’s certainly not going to get any better with the partition of Berlin and nuclear missiles in Cuba. 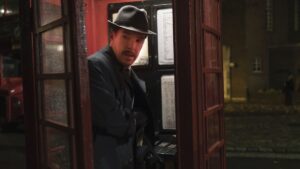 What you get here is an entirely atavistic cold war spy picture, complete with gloomy London asides, brutalist Eastern European architecture, and a lot of people smoking in wood-panelled rooms. Bit of a patchwork, though, with marked high and low points, but if you don’t expect Tinker Tailor Soldier Spy levels of complexity — to namecheck another Cumberbatch period espionage drama — you may enjoy yourself. 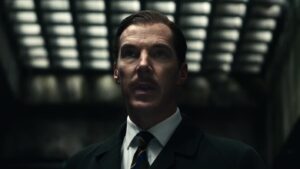 It opens well, with a surprisingly witty script having a lot of fun with Greville’s fish out of water — shades of John le Carré’s The Russia House, though the non-spy recruited to be just that is a frequent trope in many tales of espionage, not just his. There’s a welcome, playful irony to the first act as the film strives to be true to a dusty genre, but also entertain a 21st Century audience.

Less fun are Angus Wright and Rachel Brosnahan as Greville’s double-act MI-5 and CIA handlers, who never really manifest as much more than suits in bad wigs. Neither calculating spymasters nor fully fledged human beings, they fall into a grey zone somewhere in between. More vivid is Buckley as Sophie. At first it looks like she’s going to just be the thankless wife role to our lead, but she eventually gets a scene or two to remind us what Chernobyl and Wild Rose proved — she’s a major talent.

The key relationship here is between Greville and Oleg, building trust in Moscow as the increasingly culpable Brit transports reams of important classified documents to the West. The connection between the men is just this side of romantic, and if the suspense-building and plot machinations are a bit meat and potatoes, Cumberbatch and Ninidze sell the commitment to the cause and to each other. Here we find the film’s thematic meal; humanism trumps politics or loyalty to your nation. Oddly, The Courier mimics Rogue One: A Star Wars Story of all things in how it ends up being about a few people who played a key role in a far bigger story happening elsewhere. 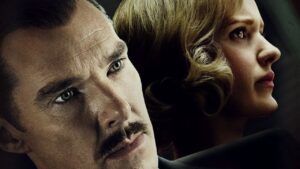 One other thing to mention: There’s a trend going on in any film lately based in true life — just before the end credits we get a photo or video of the actual person whose story has just been told. Enough already. The urge to add a dollop of documentary to the piece diminishes the work of the actors who, successfully or not, pulled together the fictionalized film that went before. I can see it justified in, say, a Holocaust drama, but it’s otherwise a cheap effort to add authenticity while sacrificing movie mystique.