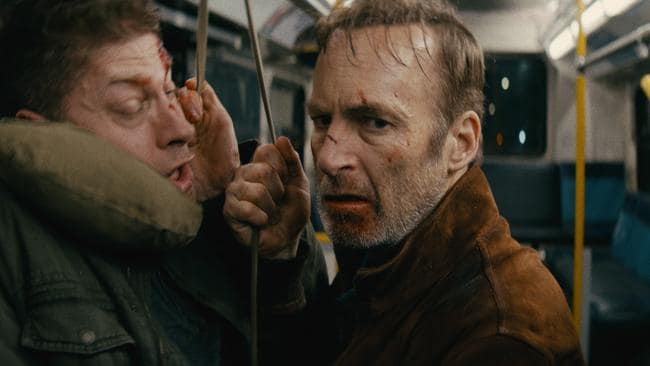 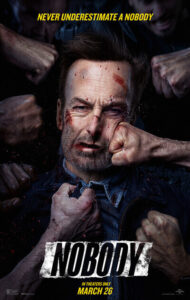 I can imagine the pitch meeting for this one: “We’ve got the writer of John Wick to do another middle-aged dude actioner, except this time it’ll star Bob Odenkirk!” “So, with the star of Better Call Saul, it’ll be funny?” “Well, funnier than Wick, but still it’s about a 50-something with a special set of skills who kills a bunch of Russians.” “Oh, so it’s really more like Taken?” “Yeah, but his kids don’t get kidnapped, they get locked in a safe room while he’s ending the lives of people who deserve to die!” “Sounds great. Here’s $50 million!” 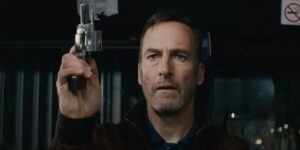 Yup, this is extremely silly stuff, but it’s also a well-made, well-choreographed action fantasy, if that’s what you’re looking for. Odenkirk isn’t so much the Wick-styled, high-functioning-but-Terminator-like machine-tooled killer, he’s more vulnerable and more likely to get hurt — not that it stops him.

He’s Hutch Mansell, a factory worker drone living a dull and repetitive life in the ‘burbs. He and his wife ( Connie Nielsen, largely ignored) share a bed, but are kept apart by a wall of pillows. They’ve got a teenaged son, Blake (Gage Munroe), and a grade-school aged daughter, Abby (Paisley Cadorath).  When two burglars bust into the house one night, the son tackles one, but Hutch holds back, allowing them to escape — much to his son’s shame.

But, after dark, Hutch goes searching for the home invaders using people-tracking skills he learned years ago when he worked for one of those “three-letter organizations” as a black-ops assassin. He tracks the couple down, but they’re just desperate and poor, not worth the beating he was hoping to lay on them.

Fortunately, while taking the bus home, a gang of unpleasant thugs deserving of death get aboard, triggering the first of many satisfying hand-to-hand and edged-weapon combat sequences. And this frantic exchange of stabbings triggers the vengeance of the picture’s primary antagonist, Russian gangster and occasional singer, Yulian (Aleksey Serebryakov).

Director Naishuller is known to me for his technically impressive but otherwise awful actioner Hardcore Henry and it’s good to see his ability to tell a coherent story is much improved, with much credit I’m sure due to Kolstad’s script. 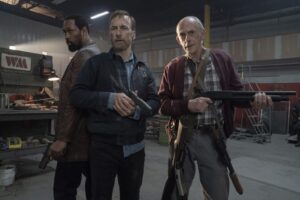 The film’s tone — tongue just slightly planted in cheek, with a gifted comedian in the lead — makes it easier to laugh off the unbearably obnoxious optics: Hutch is an emasculated, middle-aged white dude who is happier and more his true self when he’s killing people. He shirks off his day job and tucks away his family to become a muscle-car driving badass. Embracing his true American manliness and requirement to carry a gun, he finds joy in his life again. Along the way saves his family, reactivates his fallow relationship, and earns the respect of his son. (Except not really that last bit because the movie conveniently forgets that whole subplot. We instead get scenes with Hutch’s nursing home resident father, played by Christopher Lloyd, and a brother in hiding, played by RZA, with whom Hutch communicates by shortwave.) 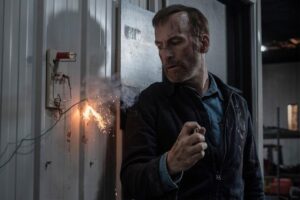 If there’s a deeper exploration of connecting to your lost youth, your true self, that you tried to smother with a “normal” life, it’s given only a passing interest before it’s drowned out by the din of machine-guns. 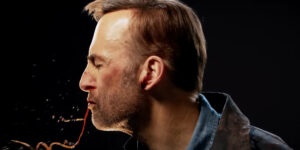 Nobody delivers just enough narrative energy and kinetic, bone-breaking satisfaction in the action sequences to make it a decent time-waster until the next Wick picture is unleashed, and it would surprise me not even a little if this one also gets its own sequel. There’s gotta be more Russian gangsters to kill, making Hutch feel more like a somebody.