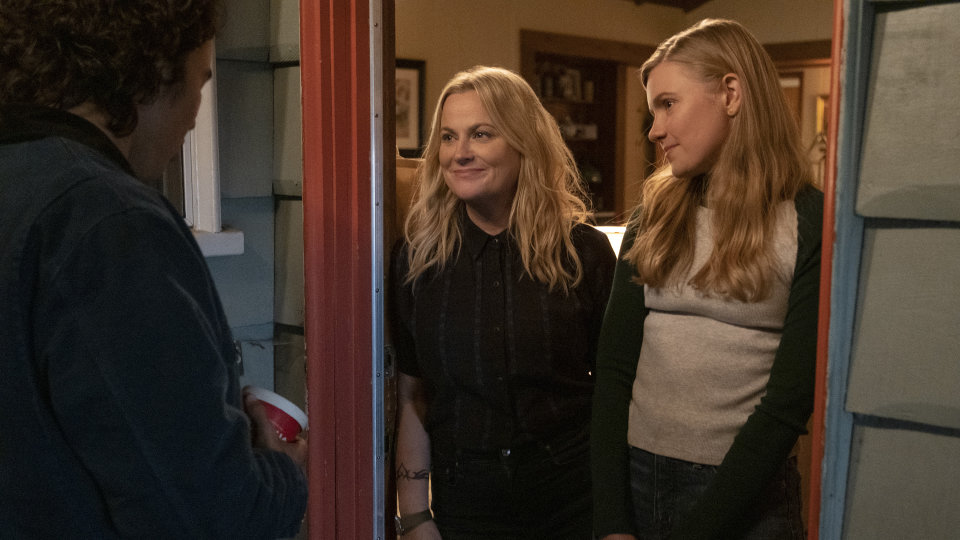 Directed by Amy Poehler |  Written by Tamara Chestna and Dylan Meyer, from the novel by Jennifer Mathieu | 111 min | Netflix 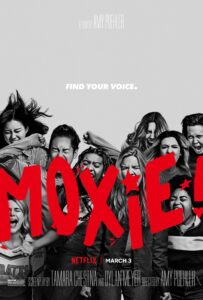 Vivian (Hadley Robinson) is a junior at Rockport High School. She’s an INTJ — Myers-Briggs for introvert — along with her lifelong pal, Claudia (Lauren Tsai). Vivian is also pissed off at the inequity at her school, how football team captain, Mitchell (Patrick Schwarzenegger, he of the very familiar Hollywood name), can be entirely inappropriate, but her classmate can’t wear a tank top without getting sent home.

Inspired by a new girl, Lucy (Alycia Pascual-Pena), and her mom, Lisa (Amy Poehler), whose teen rebellion as a ’90s Riot Grrl is stored in a suitcase of photos and zine remnants, Vivian publishes her own zine, Moxie, which activates a feminist movement in her school. This while sparks fly with her first boyfriend, skater Seth (Nico Hiraga, a Booksmart veteran), and Lisa starts to get friendly with a new guy, John (Clark Gregg). 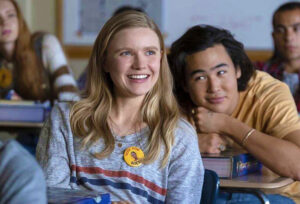 First off, this is a teen movie with some likeable performers — Robinson carries the picture effortlessly — some solid laughs, and an entirely supportable message, ideologically speaking. I’m very much on board with its spirit of engagement, and how it explores the ways in which the things we believe can make comfortable lives more complicated and more difficult to manage. There can be a price for standing up for oneself, and for leading from the shadows, which is essentially what Vivian does when she creates the Moxie brand but chooses to stay anonymous.

Moxie is also predictable to a fault, and so on-the-nose with its plot developments it could be described as a heart-warming after-school special — if they still make those things. It has only a smidgen of the surprising sophistication of Booksmart, which it certainly resembles politically and socially — it’s hard not to think of Amy and Molly while watching Vivian and Claudia. That comparison is occasionally adorable but, unfortunately, it’s also sometimes to Moxie‘s detriment. 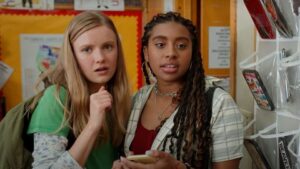 But, if it’s all just a little too conventional, the winning young cast — with support from wily veterans like Marcia Gay Harden and Ike Barinholtz — makes Moxie entirely worthwhile viewing, even cheer-worthy. It turns out (most of) the kids are alright.