Directed by Paul Greengrass | Written by Greengrass and Luke Davies, based on the novel by Paulette Jiles | 118 min | Crave Plus 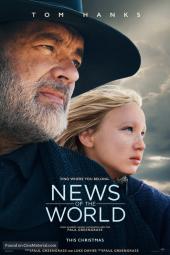 Paul Greengrass is best known as the English director of docudramas and thrillers, like the Tom Hanks starrer, Captain Phillips. On News Of The World he once again pairs with Hanks, who’s playing yet another captain in a career of them — frequently military and/or seafaring — but this time in the old west.

It’s 1870, just post-Civil War, and Captain Jefferson Kyle Kidd plies his trade; He reads the news of the day to locals in small communities he passes through. I’m not sure if these folks are just too poor to purchase the entire newspaper or maybe illiterate, but either way, “anyone with 10 cents and the time to hear it” can participate. 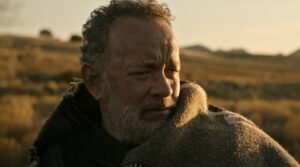 The film’s political heart — and Greengrass is a famous lefty — is in the news the Captain reads. It’s about the hard times after the war, the distrust the southerners have for the Union, the federalists, and the blue-clad soldiers they don’t like. “Everyone’s suffering,” says the Captain to quiet them down. Later on he riles up a crowd, telling a tale of miners from the north who died in the dark, in an explosion, and those who survived despite the callousness of the bosses who didn’t care enough for the health and safety of the workers, only for the money.

But really, all that’s garnish for the main course, which is a straight-ahead western — complete with gunfights, horses, and a long journey. It’s a mostly entertaining one at that. 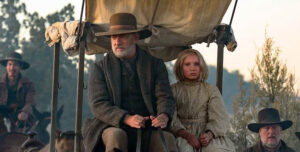 Johanna (Helena Zengel) is a girl born to German immigrants, but taken at a young age by Kiowa and raised in that Native American culture. When the Captain takes her into his care, it’s because she has no one else left to do so. Papers reveal an aunt and uncle somewhere in Texas, a trip of hundreds of miles. He volunteers to take her, and at the same time visit a wife he left in San Antonio, more or less on the way, when he went to war.

This odd couple crosses paths with armed bandits, wagon trains, a hanged man, a sandstorm, and mysterious indigenous people in the dust. They even have a wagon with a bad wheel, prompting a jump for their lives. You’d be excused for thinking Greengrass, directing his first western wants to hit every and all possible genre cliches, as well as evoke many better films than this. He’s not above a tribute to The Searchers, pointing his camera through a doorway at his two lead characters who, of course, can’t go home. He also chooses to tell his story from Hanks’ perspective, but then offer subtitles to Johanna so we can understand what she’s saying when she speaks the Kiowa language. That feels like a mistake — it gives the audience more information than Captain Kidd, which we shouldn’t have. 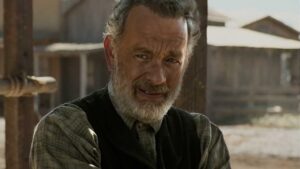 That’s not to say these elements, some of them clunky, are enough to shoot this particular horse, but it keeps News Of The World from the kind of excellence Greengrass has achieved working in other genres. In places it evokes the Coen Brothers’ True Grit, though in others not even close to the Minnesotans’ exquisite ability to surprise, even in that picture, one of their most conventional efforts.

What this film has going for it is Hanks in terrific form, warm and decent, with his young scene partner a fine match — Zengel delivers a lot of authentic emotion to help carry the day. It’s no hardship to watch these two find their way across the landscape, and what a landscape it is. Cinematographer Dariusz Wolski makes you wish News Of The World  was on the big screen. Sigh.