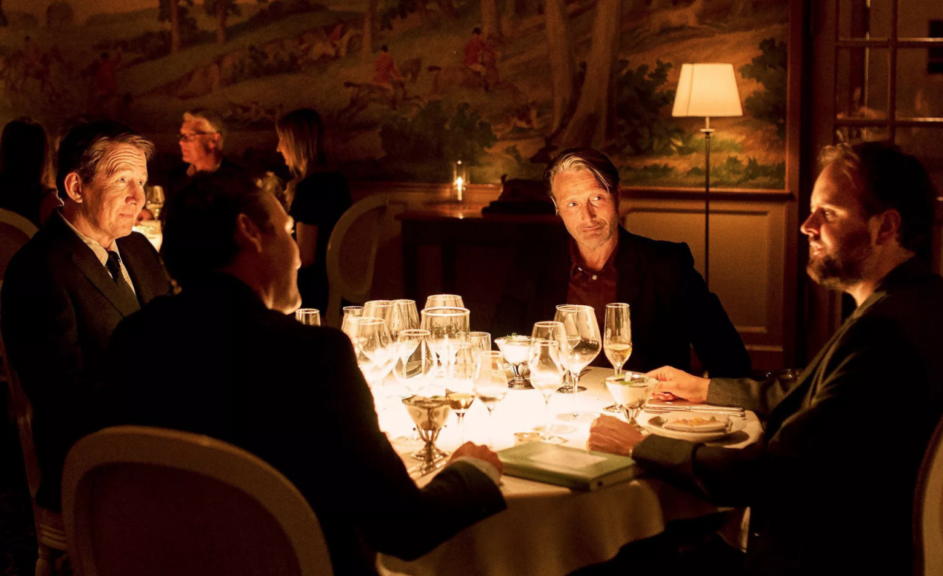 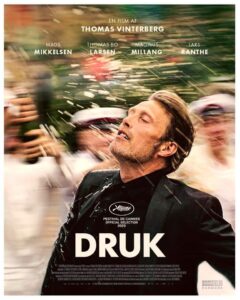 The original version of this slightly edited review was first published in September when this film was the Closing Night Gala at the FIN Atlantic International Film Festival.

He set the world alight with The Celebration (Festen) and was a shining light of the Dogme95 movement, but Danish auteur Thomas Vinterberg spent a few years in the cinematic hinterlands with films that people didn’t like (It’s All About Love, and Dear Wendy both have dire Rotten Tomatoes scores) or didn’t see (Submarino).

He made a major comeback with The Hunt from 2012. Since then he’s found more success with films like The Commune and Far From The Madding Crowd, though maybe not as much with his Netflix nautical thriller, The Command.

His cinematic return to Denmark is about four 40-something pals, all teachers, who get together for one of their birthdays. They seem to be doing well, but for Martin (Mads Mikkelsen). He teaches high school history, but not with much enthusiasm. One of his three buddies (Thomas Bo Larsen, Lars Ranthe, and Magnus Millang) hatches a crackpot idea, inspired by something he read; the average person has a deficit of alcohol in their blood — that a 0.5% blood alcohol level gives people added confidence. Martin points out many great men enjoyed a good tipple. 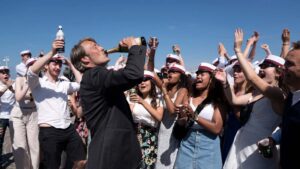 And right in the middle of this we get a hilarious collection of clips of world leaders, all appearing more than a little drunk.

So, they give it a go, imbibing through their days. On the face of it this is an awful idea, but the men all experience distinct improvement in the performance of their lives. More happiness. It’s almost a religious conversion, scored to The Meters’ “Cissy Strut.”

How could this possibly go wrong? 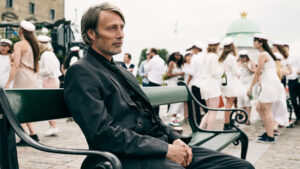 This is as described,  a midlife crisis movie featuring white dudes — not the freshest genre — but it’s got a few unexpected twists and turns, marinated in dark humour. Laughing at the behaviour of people in their cups was once a comedy wellspring, and as hoary as it is there’s some of that here, but more so on the knife edge of tension. You know these guys are going to go too far, it’s just a question of when. It’s pretty grim when it happens, but it forces at least a couple of these friends to examine what’s really wrong in their lives. For Martin it’s got a lot to do with his relationship with his wife, Annika (Maria Bonnevie). 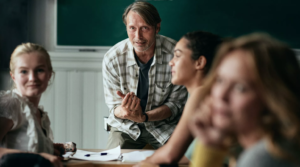 The film is rooted by the performances, which are solid all around, and the lovely interiors. This specifically Danish take is warm and welcome. If it’s not entirely original, the performances are enjoyable — Mikkelsen is a master of understatement — and the lesson worth soaking up: Booze is a cultural inheritance, for better and frequently worse.