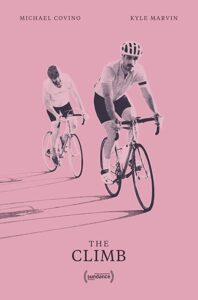 The Climb opens with two American friends riding their bikes up a hill in France. Mike (Covino) is mustachioed and fit, while Kyle (Marvin) is a little stout and a little out of breath. Kyle’s about to get married. Mike is his best man. Mike confesses he’s been having an ongoing affair with Kyle’s wife, Ava (Judith Godrèche). What follows is a hilarious, unbroken shot filled with recrimination and a pissed-off dude in a Renault 5, culminating in the titles. This is ingenious, and so much fun. 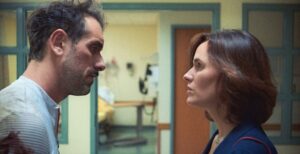 Next we’re in a hospital with Mike, Kyle, a monolingual French doctor, and Ava. Another unbroken shot, less effective, but still interesting. Following that, a scene at a funeral, and once again a long unbroken shot, concluding with a graveyard workers choir. You get where this is going: piling up the whimsy and charm, but maybe a little too self-conscious. 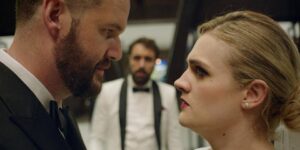 Double down on that in the next scene, where Kyle, now slimmer, dances for his new fiancé, Marissa (Gayle Rankin) in a basement before going upstairs for his family’s Thanksgiving dinner. Here the floating, unbroken shot serves no purpose other than to distract from establishing characters — Kyle’s mother and sisters don’t like the new bride-to-be, while his father (George Wendt! Norm!!!) is busy carving the turkey. We discover Kyle’s profession, which ends up being inessential information for this story — drilling down into the longtime friendship between these two men. 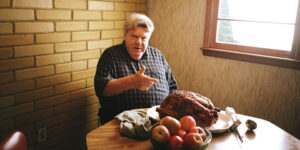 But, you’ve got to applaud the effort that went into this, especially when most comedies are satisfied to be under-styled and bereft genuine cinematic ideas, visual or otherwise. Covino’s problem is he has almost too many, occasionally drawing attention away from the clever script and performances. 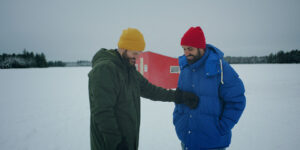 When all the parts work, like in a scene on an ice-fishing trip, there’s a genuine visual surprise that both hilarious and breathtaking.  And full marks to Covino and Marvin whose baby this clearly is — writing, directing, and starring in every scene. 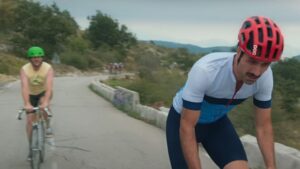 In the end if it doesn’t entirely hold together — and the connection between heavy-drinking man-boys isn’t exactly an original source for laughs — there’s more than enough cleverness and chuckles to enjoy The Climb. 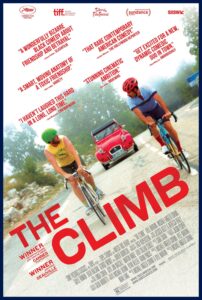