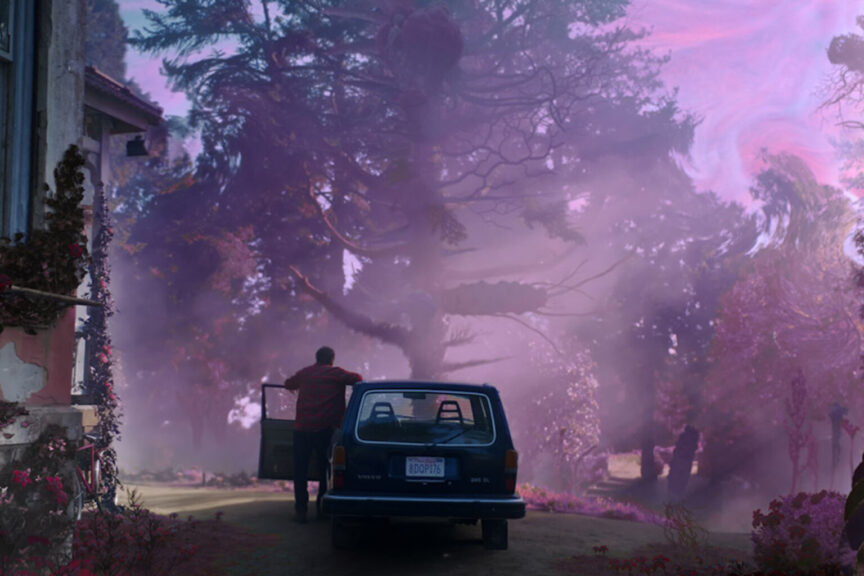 Directed by Richard Stanley | Written by Stanley and Scarlett Amaris, based on a short story by HP Lovecraft | 111 min | Netflix, On Demand 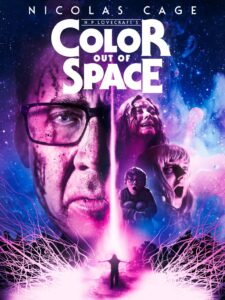 Lavinia Gardner (Madeleine Arthur, terrific) is a willful teenager dipping into witchy rituals down at the river in order to cleanse her mother, Theresa (Joely Richardson), of her cancer. They live in a house in the woods with Lavinia’s brothers Jack (Julian Hilliard) and Benny (Brendan Meyer), and their father, Theresa’s husband, Nathan (Nicolas Cage), who’s big into farming alpacas. We also meet Ward (Elliot Knight), working for a hydro company surveying the ground water in advance of the construction of a freshwater reservoir, and Ezra (Tommy Chong), a local hippie. One night, a meteorite lands on the property just down from the house, and things start to get a little colourful, and a little strange.

How strange I’m loathe to get into — there’s some pleasure to be had as the mystery of what’s going on as this possibly alien presence is deliberately revealed.

Right off there’s a genuine Poltergeist vibe here, with the characters and domestic setting feeling authentically lived in. This is the first film from Stanley in 24 years — he’s probably best known for having been fired off the set of the cinematic cataclysm that was The Island of Doctor Moreau, and hasn’t directed since. He presses the mood button a little heavily with lots of crossfades and the over-application of Colin Stetson’s otherwise effective score, but the creeps are pretty effective in the first couple of acts. 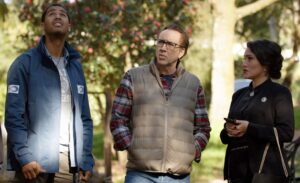 But, by the third act, the forward momentum has diminished considerably, the strange things happening seem pointlessly random, and Stanley’s indebtedness to Carpenter’s The Thing and Kubrick generally becomes more evident. I’m not faulting Stanley his influences, but it’s hard to shake the feeling that the antagonist has no real plan, and the filmmakers would rather substitute psychedelia and haunting visuals for a genuine emotional narrative. Madeleine Arthur, whose Lavinia could be the conscience of the picture, her arc gets a bit shortchanged by those effects. 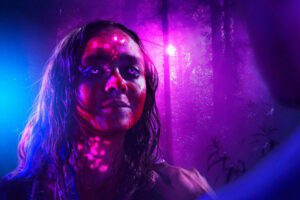 And then Nicolas Cage does his Nicolas Cage thing. Whereas in Mandy the tone of the film suited his outrageous performance, here it feels like comic relief, goofy in a way that’s counter to what the film is trying to accomplish. For a picture that doesn’t come near to sticking its landing, his presence sends it further out of whack.

It’s too bad, because otherwise there’s some confidence in the style and storytelling in Color Out Of Space. It signals Stanley has located some of his original mojo. I gather he’s planning a trilogy of Lovecraft films, and I, for one, would be interested in seeing what else he has up his sleeve.