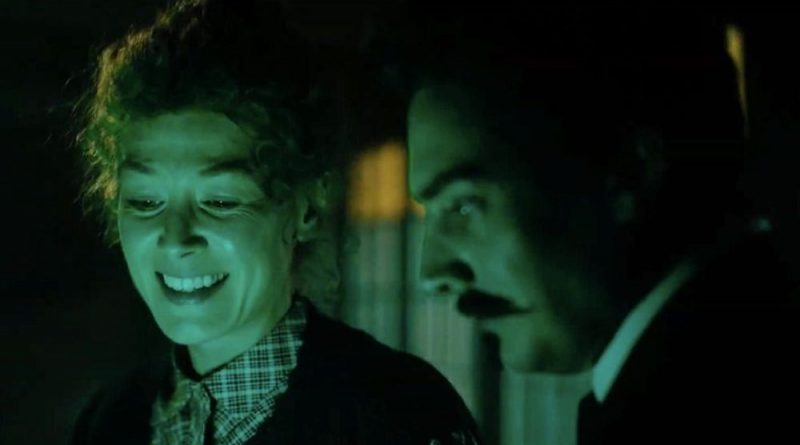 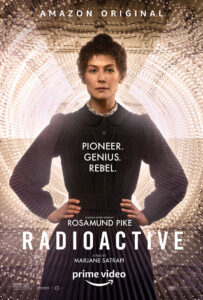 I don’t know what it is about biopics. I’m always attracted to them, but almost never satisfied by the experience. It’s a genre that reveals celebrated, fascinating personalities but tends to conventional, predictable storytelling. The good news here is that director Marjane Satrapi (Persepolis) has approached her subject with more than a little visual flourish that distinguishes it from the average. That said, the narrative is still frequently awkward. 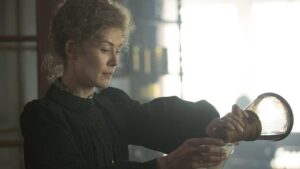 It doesn’t start well, with odious old-lady make-up and flashbacks from the death-bed. Polish student Maria Skłodowska (Rosamund Pike, impressively caffeinated) studies science in fin de siècle Paris and initially isn’t taken seriously because of her sex, but she’s too clever to be ignored. She meets Pierre Curie (Sam Riley), who partners with her on research (and as her husband) into the theory of radioactivity.

While Satrapi does a convincing job showing that Curie basically created the 20th Century, she does fall into the biopic trap of trying to cover too much of Curie’s life in under two hours — hence the need for the old-lady make-up — instead of focusing on a particular representative period. It reduces the plot to a shallow collection of “famous moments,” rather than offering much in the way of thematic understanding. 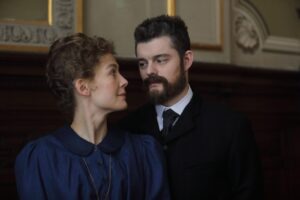 There’s also occasional narrative detours through time to show the impact of Curie’s work on future events. It’s an interesting experiment to shake up the plotting, but it ends up being just a distraction to the central story and extends the running time beyond what it can comfortably sustain.

Satrapi compensates with cinematographer Anthony Dod Mantle to create a dreamy and startling visual palette splashing onscreen, a delightful wash of green and yellow, smokey rooms, and darkened corners of the frame to give the impression of viewing all this through an iris. A lot is forgiven when the production design is this mesmeric and thoughtfully conceived. That and a gorgeous electronic score from Evgueni and Sacha Galperine, featuring an occasional theremin! Lots to love there. 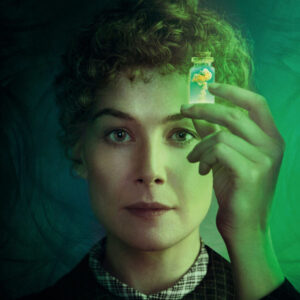 Then there’s Ms Pike, preternaturally impressive as always. She easily carries the film, but the script doesn’t really give much for anyone else to do. Riley is fine, and we get moments with Simon Russell Beale and, later on, Anya Taylor-Joy, but this really is the Pike show from start to finish. May as well get the full dose.