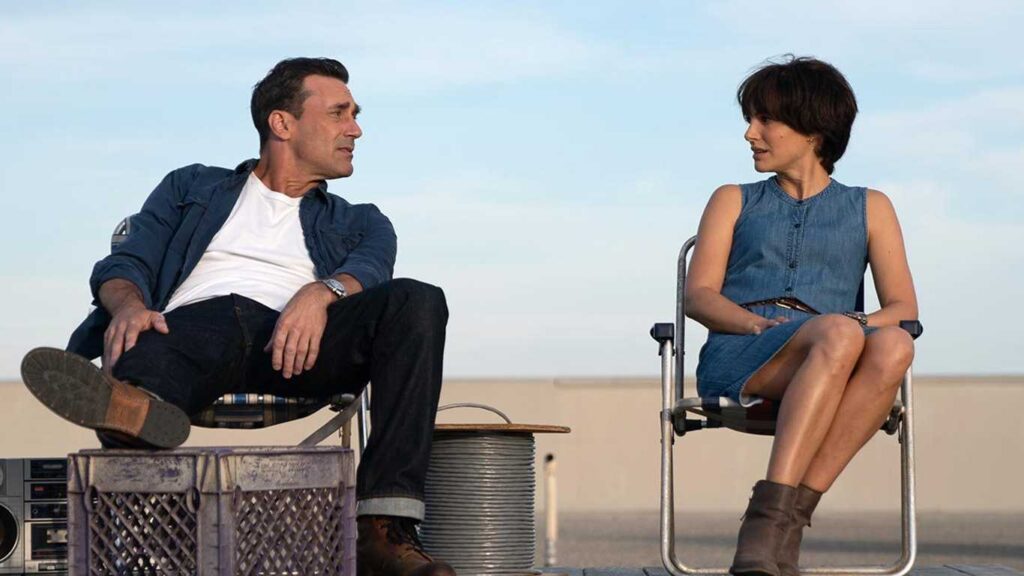 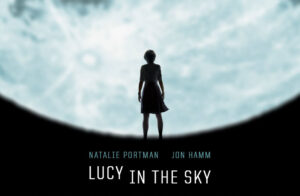 Given the chance, I’d rather watch an interesting, ambitious failure than some glossy, machine-tooled entertainment, and that’s exactly what you get with Lucy In The Sky — the former, that is.

The film is very loosely inspired by the true story many would’ve heard, about NASA astronaut Lisa Nowak who drove across, like, three states to confront a woman who was another point in a love triangle. She became the first NASA astronaut to ever be arrested. There was that delicious detail no one’s likely to forget, that she wore diapers so she wouldn’t have to stop to pee.

Natalie Portman is Lucy Cola, who we meet in orbit having a celestial, transformative experience. Cue the Jeff Russo score deeply indebted to Hans Zimmer, and later Ellen Burstyn shows up and this all seems too similar to Interstellar for comfort, which is especially funny because later on it shares a lot more in common with an entirely different film, I, Tonya. The joy of this picture, if there is any, is that in its sometimes mixed-up storytelling it doesn’t give much indication of where it’s going. It’s deliciously unpredictable.

Once we settle on the ground (and in an Academy frame — widescreen is saved for scenes in space and later, for Lucy’s cross-country road mission), Lucy In The Sky becomes a compelling character study of a confident, capable woman who, little by little, starts to lose her grip. 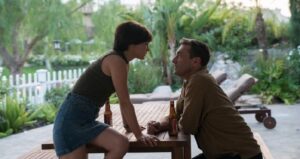 This feels like a story worth telling, especially in such a vivid way, especially the parts where it’s clear Lucy’s frustrations are based on having to overcome systemic sexism in the workplace. Director and co-writer Hawley, showrunner on TV series like Legion and Fargo, is a little too pleased with shifting tones like he’s still aping the Coen Brothers, but no one does it like they do. Hell, even they screw it up sometimes.

What Hawley does well is adding some little dazzling psychedelia into the visual approach. A swirling production design a big part of the film’s appeal. 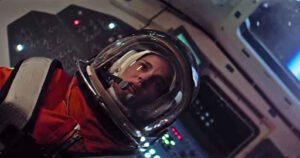 And so is Portman, who’s never less than interesting on screen. Here she’s channeling a Tom Cruise-level of ambitious mojo, where her ferocious drive to go back into space is all consuming, to recapture that moment of wonder for having seen the entirely of creation. But she also channels a lot of frustration when faced with the mundanity of life on earth — her less-than-exciting marriage to PR guy Drew (the chameleonic Dan Stevens, here twitching behind a terrible moustache like a real life Ned Flanders), taking care of her foul-mouthed grandmother (Burstyn), and her creatively named niece, Blue Iris (Pearl Amanda Dickson), abandoned by her father. It’s the film’s second act where it’s at its best, sharing Lucy’s shifting perceptions and uncertainties.

There’s no doubt the film has sympathy for Lucy, but it also isn’t above mining a few laughs from her fracturing mental state. It also seems to be on her side when it comes to the problem of manipulative, deceitful men — like  gaslighter and potential love interest, fellow astronaut Mark (Jon Hamm, terrific) — but how much is it criticizing Lucy for the way she treats Blue Iris? The film stokes a certain amount of righteous anger, but doesn’t go nearly dark enough when it has the opportunity. And the way it leaves Lucy, her final disposition, feels a little trite, but then we’re never entirely sure whether to take it seriously.

And therein lies its central problem — it’s unclear what the film wants to say through its kaleidoscope eyes. But I can’t deny, taken as a whole, there’s actually a lot to enjoy in its peculiar vision.