Kristen Stewart is working nonstop these days — she’s been in five features in the past three years, the highest profile being Charlie’s Angels, with Happiest Season still expected later in 2020.

The actor achieved fame through the sparkly vampire-ridden Twilight series, but in recent years has pursued far more interesting and varied feature work. Here are reviews of four of her newest movies now available on various online services. 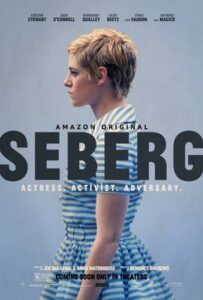 For those who don’t know, Jean Seberg was the Ohio-born actor discovered by Otto Preminger to star in the Joan of Arc biopic Saint Joan, released in 1958, and in the 1960s became a style icon thanks to having starred in the French New Wave classic A Bout de Souffle. Through the decade she worked regularly in Europe and Hollywood, including on the Lee Marvin/Clint Eastwood musical, Paint Your Wagon. Seberg examines and fictionalizes this period in her life, with a particular interest in her activist politics and an affair with Hakim Jamal (Anthony Mackie), cousin of Malcolm X. 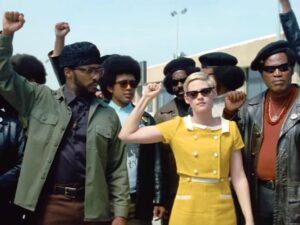 The film is austere to a fault, maintaining a stylish cool to match its lead character. Kristen Stewart plays her as confident but not conniving — despite her superficial and financial success, she’s looking for something to bring meaning to her life, where her career, her marriage (to author Romain Gary, played by Yvan Attal), and motherhood have failed to do. The picture is self-aware enough to recognize her privilege as she suddenly takes an interest in social issues, but as Seberg’s struggles with mental health become the heart of the matter,  the script keeps us at arms length. 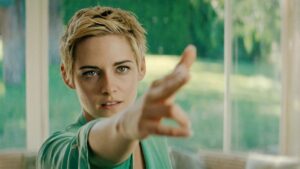 Seberg also spends a lot of time, probably too much, with a fictional FBI agent, Jack (Jack O’Connell), his medical student wife, Linette (Margaret Qualley), and Jack’s douchebag FBI agent partner, Carl (Vince Vaughn). The feds have Seberg under surveillance because of her involvement in the Black Panthers, but Jack’s interest in her is a lot more personal. Spending more time with Jean, Hakim, and their families (including Zazie Beetz as Dorothy Jamal), that’s where the film clicks.

As a Hollywood biopic Seberg doesn’t do much that’s new. but it stays compelling despite that through Stewart’s sincere lead performance and a plausible look at the damage caused by law enforcement overreach during an era of unrest — as familiar now as it was then. 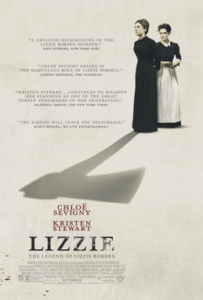 “Men don’t have to know things, Bridget. Women do.”

And so begins the intrigue between the infamous Lizzie Borden (Chloë Sevigny),and the Irish maid, Bridget Sullivan (Stewart), in the town on Fall River, Massachusetts, 1892. Lizzie is of course the suspected murderer of her father and stepmother, and here is epileptic.

This telling of the well-known tale — done as recently as 2014 in a TV movie, starring Christina Ricci and shot in Halifax  — goes with a understated-to-a-fault approach, whispers of gothic creep but articulating a restrained period drama. The film has a distinct absence of lurid thrill and doesn’t offer much to replace it. 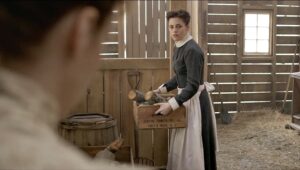 Macneill instead hinges the film on plenty of close-ups of his actors in lace, roaming gloomy, cavernous rooms full of antiques, and smartly lets the performers gifts carry the day — Sevigny and Stewart are strong, with Fiona Shaw, Kim Dickens, and Denis O’Hare in support. The plot’s fuelled on the rumoured romance between Lizzie and Bridget — though it’s deep into the second act before we get any heat in that department — and Lizzie’s father (Jamey Sheridan) ongoing tyranny over everyone in his household. The feminist undercurrent is present and undeniable — Lizzie resents the lack of say over her own future, with her illness giving her father an excuse to exert control while the women in the house can do nothing. 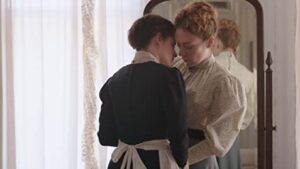 The sloooow build of suspense — where this is going can’t be a surprise to anyone — tests the patience, but rewards it, too, when the axe eventually falls. 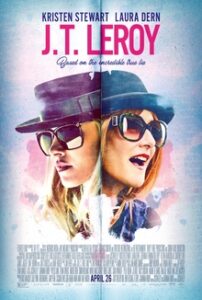 For those who don’t recall, JT LeRoy was the literary alter ego of Laura Albert, who wrote a series of popular novels in the ’90s and ’00s. LeRoy was supposedly the son of a prostitute from the south who moved to California. Albert pretended to be LeRoy in phone interviews and kept her literary persona under wraps, but in person she enlisted her partner’s sister, Savannah Knoop, to impersonate JT LeRoy as the androgynous, bewigged, possibly transitioning author.

Kelly’s got lots of experience as a filmmaker — his based-on-real life drama, I Am Michael , wasn’t great, but it did feel like an authentic LGBTQ community voice. 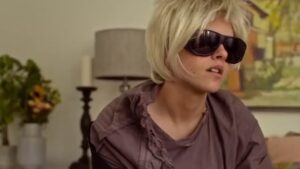 Some of the problems that beset that film surface here — an uneasy narrative that takes too long to hold, and an uncertainty in its themes: Is JT Leroy about authenticity?  Loyalty and friendship? Is it about art? Is it a love story? Is it about gender identity? The problem might be that it wants to be all of these things, and with material this rich I can understand the temptation.

Maybe most frustrating is that it’s nowhere near the ride it must’ve been for the participants pulling off this performance, having the publishing and film worlds sit up and beg for attention. At no time does it seem like any of it was much fun.

Stewart and Dern as Savannah and Laura are both good , but both are a little adrift in this meandering script, while poor Jim Sturgess barely registers as Geoff, Laura’s partner and Sav’s brother. In support, Kelvin Harrison Jr  has some good moments as Sav’s ostensible boyfriend, while Diane Kruger shines as Eva, the actor/director who gets the rights to make a film version of one of LeRoy’s novels and gets  close to her inspiration. In real life it was Asia Argento, but she clearly didn’t sign off on this adaptation.

If you check out the film, it might be worth your while to catch (before or after) one or two of the documentaries about the same subject: Author: The JT LeRoy Story is on demand, and The Cult Of JT LeRoy can be found on Kanopy. 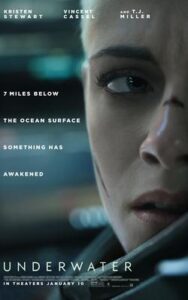 Eubank co-wrote and directed an interesting if flawed science fiction picture from a few years back, The Signal. But this follow-up, while loaded with immersive production design and claustrophobic scares, borrows so heavily from Alien, The Poseidon Adventure, even The Mist, it misses the ambition of Eubank’s predecessor, instead providing a checklist of better movies without a fresh catch. 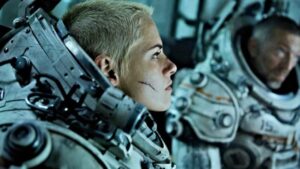 Stewart is Norah,  a mechanical engineer working at Kepler, a high-tech drilling facility at the bottom of the Mariana Trench. In the opening moments we learn three things about her: She’s kind to arachnids, she has trouble discerning reality from dreaming, and she finds a comfort in cynicism. “There’s a lot less to lose.” 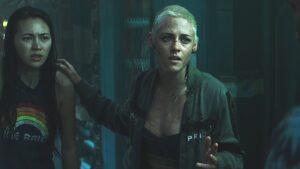 None of this feels especially relevant to what she (and we) have to go through immediately following: a catastrophic structural failure sets a small group of workers on a journey through elevators, tunnels, and unconvincing submarine CGI environments trying to stay alive. Eventually it’s spoiled by plot holes deep enough to drown in, but before then, as it pivots from seismic disturbance drama to something altogether creepier, we get to navigate the beats of a by-the-numbers disaster movie. 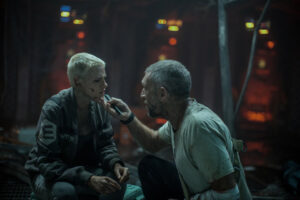 Joining Stewart in this seafloor excursion is John Gallagher Jr and Vincent Cassel, both recently seen on Westworld, along with Jessica Henwick, all of whom bring some flavour to their characters and the production. TJ Miller and his usual schtick, less so.