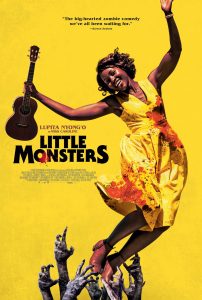 An ill-advised Australian combination of raunchy comedy, wholesome romance, and zombie picture that works sporadically in each of these genres, but never coalesces into anything special.

Dave (Alexander England) is a busker who plays electric guitar and was once in a metal band. He’s got negative charisma, so it’s no surprise when he catches his girlfriend with another guy. 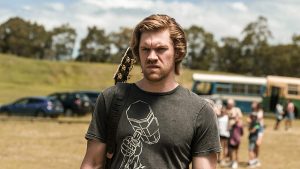 He crashes on his sister’s (Kat Stewart) couch and proves to be a not great influence on his five-year-old nephew, Felix (Diesel La Torraca), what with all his misery and swearing, but he does walk Felix to school, and immediately falls in lust with Felix’s kindergarten teacher, Miss Caroline (Lupita Nyong’o). Dave volunteers to join Felix’s class on a field trip to a farm, which the same day is visited by Josh Gad’s children’s entertainer Teddy McGiggle and a full-on zombie outbreak. I’m not sure which is worse. 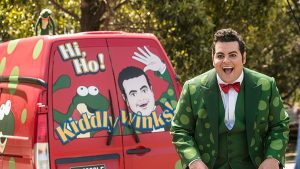 Nyong’o is typically great, and is dab hand with a shovel for beheading, while the kids are cute and the zombie make-up impresses. Unfortunately, not much else here is worth the watch. Gad doubles down on his generally unpleasant screen persona, and England, who apparently has a busy career going, is pretty obnoxious here as a leading man. 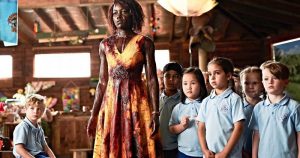 The picture steers into stomach-churning dramatic sincerity about halfway in, and just when it can’t get any worse, Gad’s character bites a zombie child. At that stage I was wondering who this movie is for, because it’s definitely not me. For Nyong’o completists, maybe.