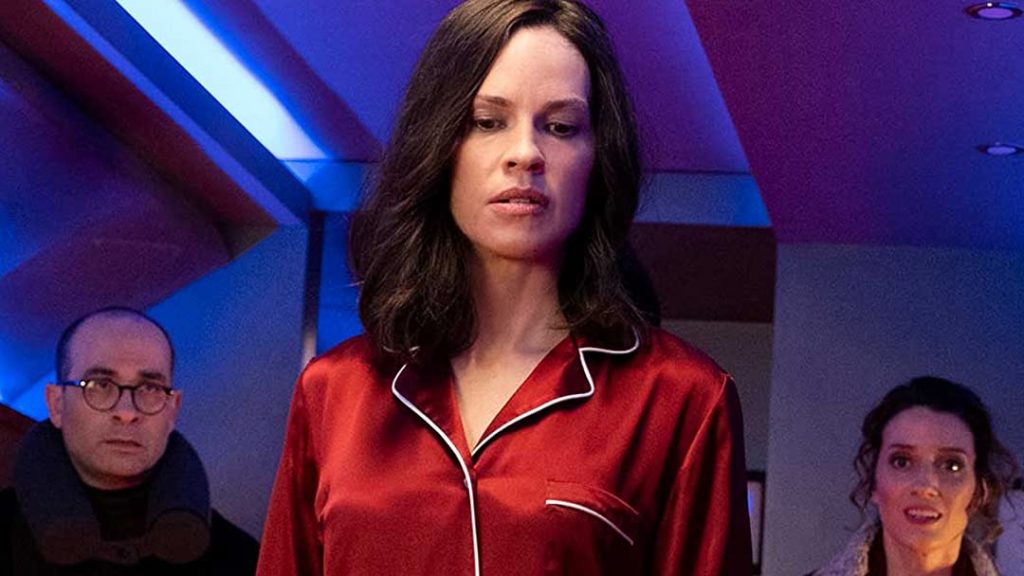 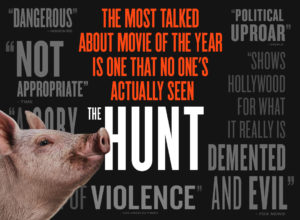 This is not the excellent Thomas Vinterberg drama from 2012 starring Mads Mikkelsen that I’m sure you were confusing it with.

No, I didn’t really think you were confused. That’s just a little art house cinema humour for you. 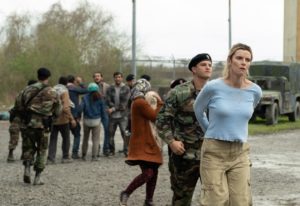 This is the bloody, frequently hilarious Blumhouse satire originally intended for release back in the fall when a couple of mass shootings in the United States gave the distributor cold feet, and a vocal minority of conservatives got up in arms about a movie where “deplorables” are hunted by the liberal elite.

The film finally gets a release date in cinemas on March 13 of this year, just before they all shut down. Now when you search for The Hunt online, words like “cursed” show up.

And, you know what? The Hunt deserves a better fate. 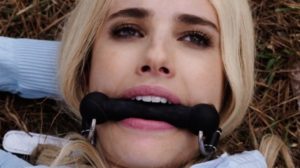 First off, the rage of conservatives at the film is wildly misplaced — not surprising given none of those folks would’ve actually seen it at the time.  The script takes just as broad swipes at American white liberals as it does the redneck Trumpians, doubling down on stereotypes all around. A lot of American reviewers having now seen it are outraged that this isn’t the Republican-skewering fantasy they were promised.

It’s certainly not effective satire in that it doesn’t really pick a side — it’s too broad and haphazard and it sure doesn’t offer much in the way of thoughtful commentary on polarized America. There’ll be those who call that a cop-out, but in the end the film saves its venom for those worship at the altar of the internet, those who spew hatred without a second thought on the damage done. Whether that’s effective is also arguable.

Is it sophisticated? Not very. Is it a lot of fun? Absolutely. 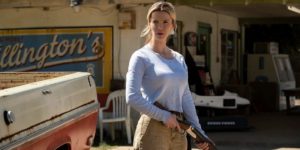 What The Hunt does well is deliver an exploitation action comedy. It’s packed with entertaining fight sequences and creative, gory death scenes, while at no time ever taking itself too seriously.  Tonally, it reminds me a little of last year’s Ready Or Not while playing in the sandbox of our social media culture, using genre to take goofy swats at fundamentalists. It’s too entertaining to be offended by. 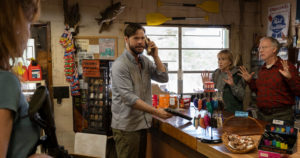 Filmmaker Craig Zobel also directed the terrific, underseen Z for Zachariah, and here works with a cast filled by familiar faces who all bring it, even if their appearances qualify as maybe a day’s work on set — Ike Barinholtz, Ethan Suplee, Emma Roberts, Sturgill Simpson, Macon Blair, and Amy Madigan amongst them. Co-screenwriter Lindelof certainly has his detractors — I still say Star Trek Into Darkness is a warcrime — but his recent work on HBO’s Watchmen is terrific.

The antagonist, played by double Oscar-winner Hilary Swank, is saved for a big reveal, though to what end is a bit of a mystery. The real better-than-it-needs-to-be performance here is from Betty Gilpin, who’ll be familiar to fans of Netflix’s GLOW. As a hunted who becomes a hunter, she’s a capable ass-kicker who gets a terrific monologue worth the price of rental, and deserves a sequel as good as this one. That’s probably unlikely, but with luck this picture will be a springboard for her to land more big screen roles. 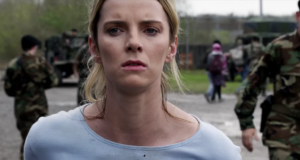 There’s no need for anyone associated with The Hunt to pick up the stink off that “cursed” label. This is simply a movie awaiting its cult.