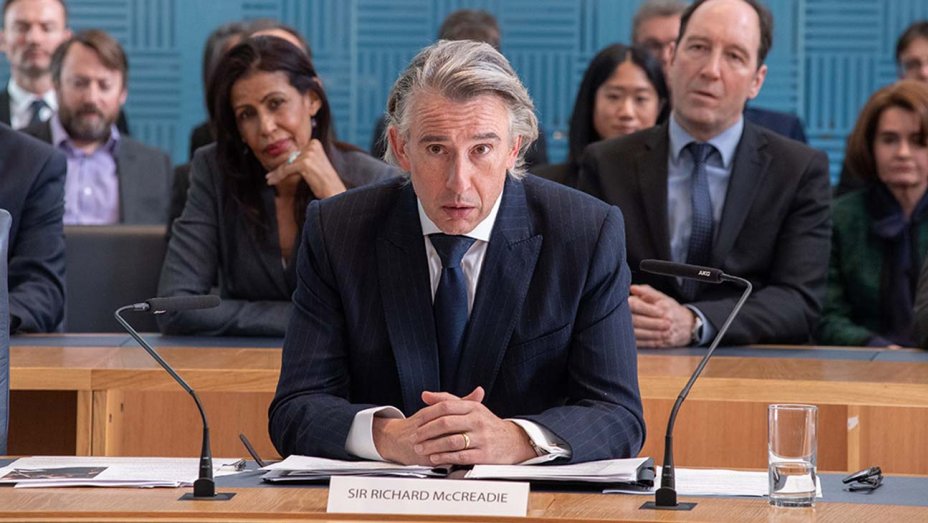 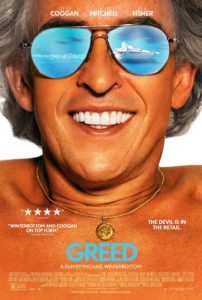 “I don’t need drugs, I am drugs!” says the young Ricky “Greedy” McCreadie (Jamie Blackley, looking like Rufus Wainwright’s angrier brother) who eventually becomes a billionaire, knight, fashion tycoon, and all around asshole — played by Steve Coogan. Watching this movie, I absent-mindedly wondered if Coogan, as talented as he is, will ever get tired of playing obnoxious pricks. “I’m in the business of loud!” he yells. Too true.

The idiosyncratic Winterbottom is a maverick in British cinema, a filmmaker who never met a genre he didn’t want to twist inside out. He’s also wildly prolific—he’s directed a dozen features and a documentary since 2010— but with only a few of his movies released over here. His restlessness and repeated risk-taking means his films go off the rails as often as they fly, but he’s worked frequently with Coogan on many of his most successful pictures — 24 Hour Party People, Tristram Shandy: A Cock and Bull Story, and the Trip series. Unfortunately, this rambling satire is a dud, a beast as emotionally toothless as the CGI lion Ricky keeps in a cage. 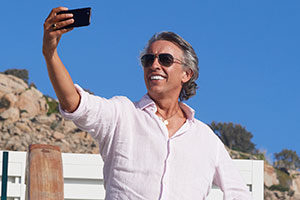 Ricky is preparing for his 60th birthday party (inspired by Gladiator, the movie) on a Greek island while a gormless biographer (David Mitchell) hangs around interviewing important people in his life, including his ex-wife (Isla Fisher) and mother (Shirley Henderson in awful old-lady make-up since in RL she’s literally a month younger than Coogan — I checked), while his son (Asa Butterfield) plots his death, his daughter (Sophie Cookson) flounces about in her own reality TV series, and various assistants and party planners (including Sarah Solemani, playing the single character we get to know who musters any sympathy) hover. All this while Syrian refugees on the beach “ruin the view.”  It’s pointed, didactic, and all fairly dull, made worse by some truly painful shots at celebrity and the vanity of the 1%.

We jump back and forth in time, getting slices of Ricky’s young life and his efforts to defend his business practices to some kind of parliamentary inquiry, none of which helps us come to grips with the characters, or care much for anyone on screen. I couldn’t help but think about how much more effective Scorcese’s The Wolf Of Wall Street was in tackling spiritually similar material. 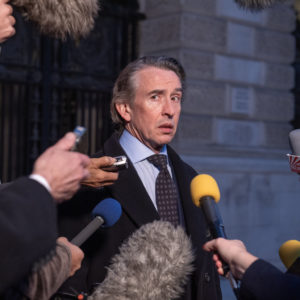 Multiple issues end up sinking the operation, maybe most prominent the god-awfully lazy use of classic rock from “Get It On (Bang A Gong)” by T-Rex to The Clash’s “London Calling,” but the fact the script is entirely absent laughs and only slightly less absent any real sense of poignancy tie for a close second. 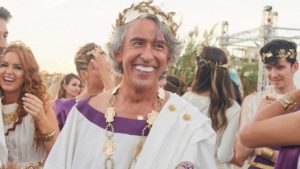 Winterbottom fills the final minute of the film with information about conditions for workers in Sri Lanka and the reported profits of the worlds’ biggest fashion brands, appalling details that just serve to underline that his fictional film failed to make us feel the outrage the facts do.