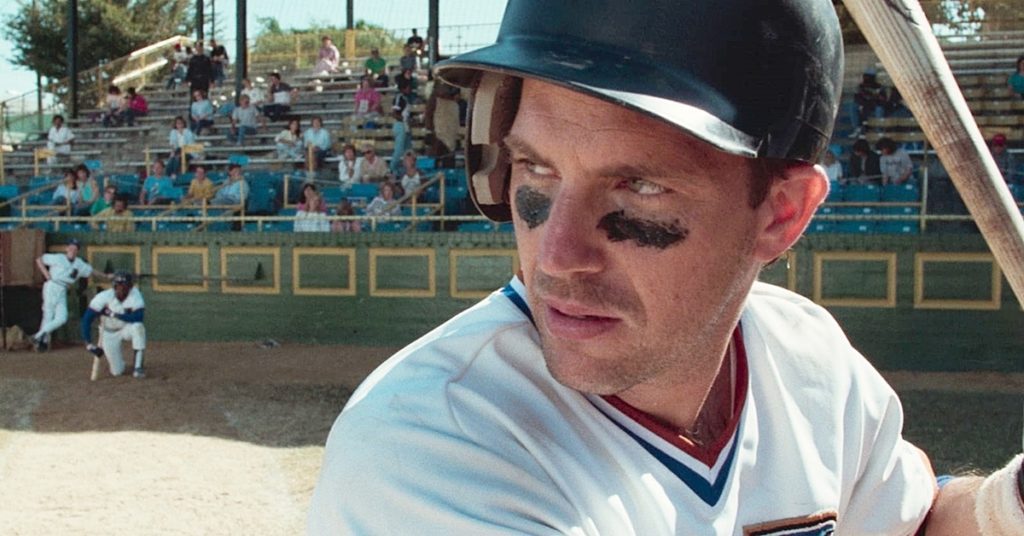 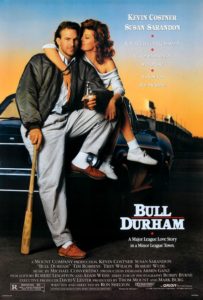 Isn’t summer great? Remember what summer is like? This feels like it’s been the longest winter in living memory, and the current global pandemic makes it hard to think about things like long, warm afternoons, baseball, and, well, sex.

These are the preoccupations of Ron Shelton’s Bull Durham, one of the great sports movies. Though the setting is the Carolina League, at its heart it’s a romantic comedy arranged around a love triangle between a longtime catcher, Crash Davis (Kevin Costner in his prime), a talented but dense pitcher, Ebby Calvin “Nuke” Laloosh (Tim Robbins, hiding his natural intelligence), and Annie Savoy (Susan Sarandon), a local baseball and baseball-player aficionado. 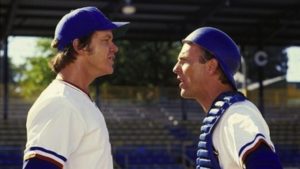 Annie’s self-appointed role is to choose one promising young player to romance, and at the same time give him the wealth of her experience with the game. She’s a fascinating character — she believes in the church of baseball, and lives her life accordingly, but she’s also a fan of American poets. She’s an unapologetic sensualist in a way that even now feels unusual in Hollywood movies. 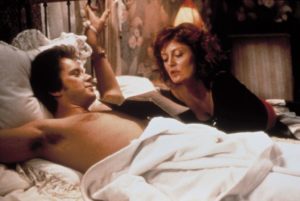 Costner has always been a great movie star. He’s often been compared to Gary Cooper, in that he had a leading man presence without a lot of versatility. That isn’t meant as a dig — Jack Nicholson always said that whenever someone gets to be a lead in a movie, they have something special. They must, because so many people want the job. Costner was an A-List leading man in American movies for a good 15 years, no small achievement, and this is one of his best roles — Crash Davis has all the wisdom and smarts required to be a great player, and maybe even the talent, but he also has a streak of self-pity that kept him from staying in “The Show.” Next to Nuke Laloosh, he’s unbelievably charming and smooth. We fall for him, just as Annie does. 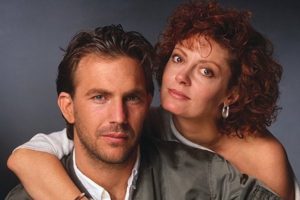 Robbins is, as always, reliable and believable, and it’s great to see him having fun playing such a broad character. The film also benefits from great casting in the smaller roles, including Jenny Robertson, Robert Wuhl, and Trey Wilson, who plays Skip, the team’s coach. He gets one of the best lines of the movie about those damn lollygaggers. 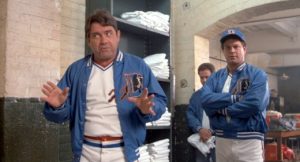 Tonally, the film shifts in the last act to a more sombre place, but where lesser films might’ve handled a shift like that clumsily, Bull Durham never puts a foot wrong. A more melancholy coda feels natural with the departure of one character, which allows for a more mature reality and still providing a little bit of fun as the couple who should’ve been together from the start finds a way to each other.

Aside from the great gags and performances, what this movie is probably best remembered for is how it deconstructs sports cliches, everything from baseball superstitions to the mundanities of athletes speaking to the media.

There’s just nothing wrong with Bull Durham,  so if you haven’t seen it, whether you’re a baseball fan or not, do yourself a favour. 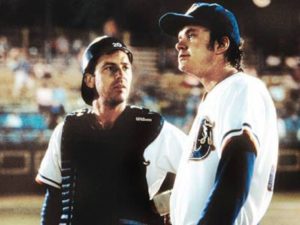 We could all use a little dose of summer right now.