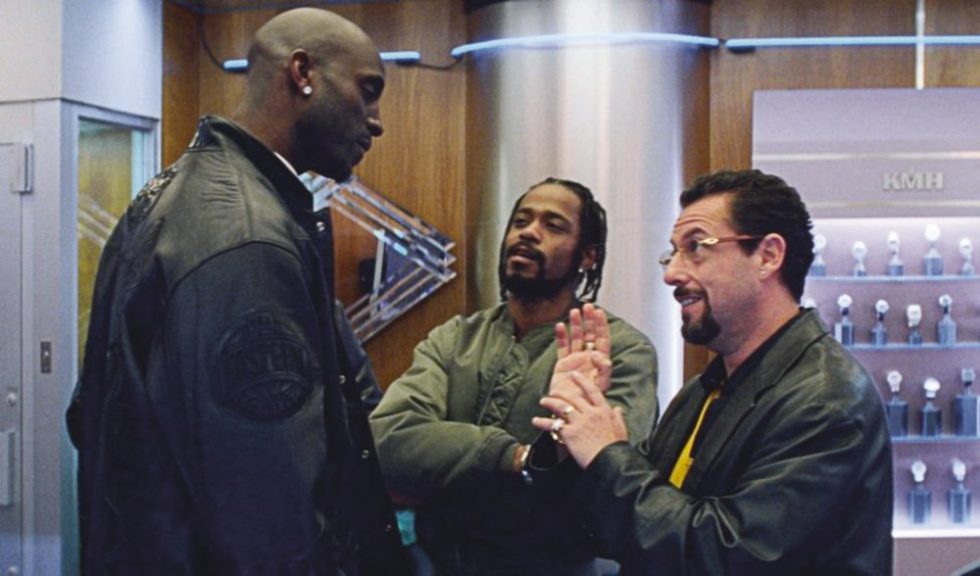 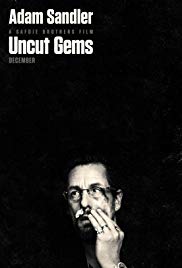 The Safdie Brothers’ new feature concentrates further the caffeinated charge of their last film, Good Time. It’s the story of a New York jeweller and gambling addict whose life  goes off the rails over a chaotic week. It’s a terrifically intense, agitated movie, and it won’t be everyone’s stimulant of choice, but it’s easily one of the best films of 2019—arriving in cinemas elsewhere, but will be on Netflix by the end of January. 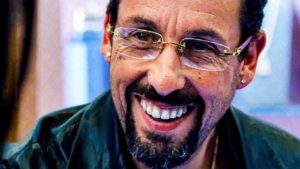 The picture lands at a gallop, with 15 minutes of dudes yelling at each other. It starts in Ethiopia, nine years ago, where a miners take advantage of a diversion to cut a chunk of opal out of the tunnel wall. Months later Howard Ratner (Adam Sandler) gets his hands on the stone that he suggests is worth more than a million dollars, and not a minute too soon. He owes thousands of dollars to more than one group of shifty, meaty men (where Eric Bogosian plays maybe the angriest) while he rubs elbows with celebs (the Weeknd plays a coked up version of himself) and professional athletes, thanks to Demany (LaKeith Stanfield). Every entourage has a guy like him, someone who knows how to gets the drugs and the toys and the baubles, and Demany brings former NBA star Kevin Garnett into Ratner’s shop, and gets him interested in the African prize, which allows Ratner the opportunity to go further into the hole with another outrageous bet. Elsewhere in this symphony of tension he’s separating from his wife (Idina Menzel, convincingly disgusted) and dating one of his employees (Julia Fox) who’s got a side-hustle as a coke dealer. Keep your ears open for Natasha Lyonne and Tilda Swinton’s voice work. 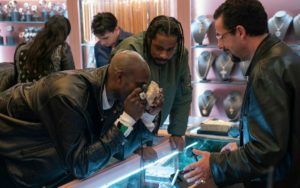 This is hard watch. It doesn’t help that Adam Sandler is so good channeling the fast-talking sleaze that’s long been a part of his comedic persona—his Ratner is alternately awful and pitiful, but somehow he generates sympathy, especially by the third act when he comes to grips with that most American idea: win at all costs. It’s as if the movie is making the case for him just as it reveals the price everyone around him pays for his ambition. It’s a remarkable performance from Sandler, who in the year where he had the biggest film on Netflix, Murder Mystery, he’s also gonna have one of the best. The guy who was Opera Man is having a hell of a career, and those who pushed for him to get an Oscar nod for Punch Drunk Love are cheering once again.

Y’know who else is terrific here? Garnett. He hasn’t acted on screen since Rebound—a basketball biopic shot in Toronto back in 1996 that, fun fact, I worked on as a production assistant—and he has a lot of fun playing with the image of a superstitious, sensation-chasing superstar. 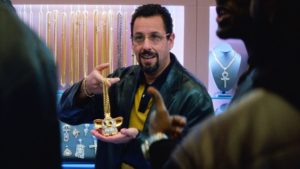 But what impresses most of all is the Safdie brothers’ confidence in their storytelling, wrapping the 2012 NBA Conference Semifinals into their drama for added verisimilitude—there’s a terrific sports docudrama just outside the margins of this picture.  The street-level milieu of bookies and jewellers is unerring, as is the casting in all the smaller roles, with the pounding sax-and-synth ’80s-style score from Daniel Lopatin helping to bring it all together. The only place where the aim is off is the effort to give the lust for sparkling rocks historic weight. There’s certainly an argument to be made that Howard is part of a long line of human interest in pretty things, here that angle feels tacked on rather than an essential part of what drives the movie.

Nonetheless, this is a remarkable, relentless picture. Hang on tight, folks.