Directed by Todd Haynes | Written by Matthew Michael Carnahan, Mario Correa, based on the New Yorker article by Nathaniel Rich | 126 min | Crave Plus 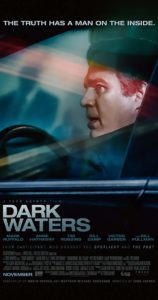 Without overstating it, if you had any doubt previously about whether large corporate entities like the American chemical giant DuPont are machines that destroy peoples’ lives, this film will erase any and all uncertainty from your mind.

Dark Waters tells the story in chillingly Michael Clayton and Erin Brockovich-esque style of an almost 20-year crusade by Cincinnati lawyer Robert Bilott (a vanity-resistant Mark Ruffalo) to reveal the truth about DuPont’s dumping toxic waste into the environment in West Virginia, poisoning the people who live there. Apparently we’ve all been a little poisoned by enormous companies who put profits before the wellbeing of human beings. Their products can be found in our cells, and our lives’ most mundane corners.

This is bitter and bracing stuff, a moodily scored and shot procedural that never ceases to hold the interest, and a slowly pulsing narrative that refuses to look away from the darkness. 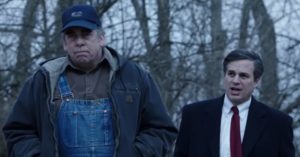 It’s not a perfect film, and where it suffers is in the detours into Bilott’s personal life—necessary to understand the personal cost of his efforts, but dramatically a little inert. Anne Hathaway has the unenviable role of Sarah Bilott, Rob’s wife, who gave up her legal career to be a homemaker and mother. She gets to say all those prescribed things we always hear from the neglected partner of an agenda-driven character, someone who’s had to sacrifice in the shadows, and she reacts without having much to do otherwise. She gets about two decent speeches, but she’s working with the boilerplate.

And that’s the occasional danger with Dark Waters—this is a story worth telling about an important issue that it mostly gets right, but the revelation of appalling malfeasance is sometimes told a little ordinarily. 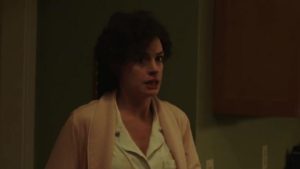 This is especially noticeable coming from Todd Haynes, who also gave the world the entirely terrifying Safe, Far From Heaven, Carol, and most recently, the woozily arcane Wonderstruck. He’s not an ordinary filmmaker, and while he’s capably delivered this docudrama, you can’t help but be a little disappointed it doesn’t exhibit more of his unique cinematic flare.

It’s left to the cast to offer brighter moments. As Bilott, Ruffalo hides his charisma, but stalwart character performers like Tim Robbins, Bill Camp, Bill Pullman, and Mare Winningham all do good work to bring something special in support, playing defendants and lawyers who Bilott connects with as he continues his long-running underdog battle.

All this said, the lingering take-away—and this is very much to the film’s credit—is of the unmistakable realization that we’ve been screwed by both massive corporations and by the elected people we expect to protect us from them. Maybe not as regularly here in Canada, but then, maybe not.