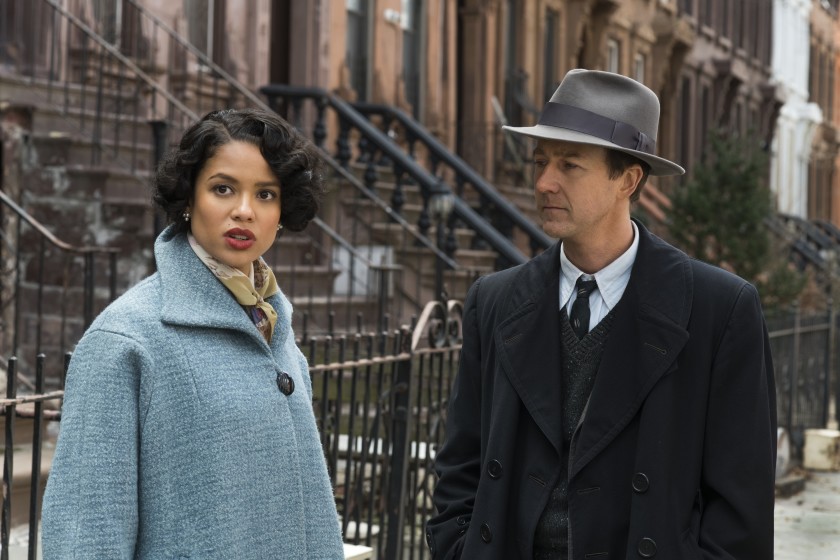 Directed by Edward Norton } Written by Norton, adapting the novel by Jonathan Lethem | 144 min | Crave Plus 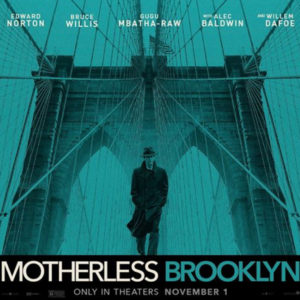 How did Norton, who hasn’t directed since Keeping The Faith in 2000, manage to get this feature made, one where he produces, writes, directs, and acts?

I’m impressed, but just the same I’m often a little dubious of these kinds of efforts, the unrestrained vanity of a star who needs to wear so many hats. Motherless Brooklyn is a long way from perfect—it might’ve been even better of Norton had taken off a couple of those hats—but despite a few problems it works anyway thanks to standouts in the casting and his commitment to genre storytelling.

The genre we’re talking about here is the old-fashioned detective movie, with the picture set in at least three boroughs of New York City in the 1950s and regularly reminding us that most of the male characters went to war and came home damaged men. 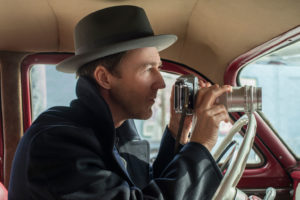 Norton is Lionel Essrog, one of a team of private dicks scrabbling to make a living at Frank Minna’s (Bruce Willis) agency. What makes Lionel usual is his Tourette’s, what he describes as a piece of glass stuck in his head. Even his colleagues call him “Freakshow,” but he’s useful for his nearly a photographic memory.  When a thug cancels Frank’s ticket,  it’s up to Lionel to figure out why, and through his investigations he uncovers a conspiracy that goes up the ladder to city planners, men who make their living clearing slums, what used to be called “urban renewal.” It involves an influencer named Moses Randolph (Alec Baldwin), an out-of-work engineer (Willem Dafoe), and an activist named Laura Rose (Gugu Mbatha-Raw) who lives above her father’s Harlem jazz club.

You can feel Norton work hard to include as much of Lethem’s novel and its wealth of characters he can, but while the actor-turned-director has a knack with his performers, he could’ve used a more judicious editor. He’s aiming for a Chinatown-esque expose of municipal corruption, but his script is nowhere near as lean—there’s no way Motherless Brooklyn needs to be 20 minutes over two hours, and it flags is in the second act with a few too many blind alleys.

Though Michael K. Williams is always a welcome presence, he gets two scenes more than his character deserves, while the otherwise excellent Cherry Jones is also wasted on an inessential character who could’ve easily ended up on the cutting room floor. And Willis, he just doesn’t seem to care about being an actor anymore. 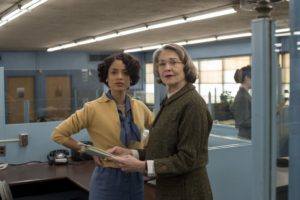 Then there’s our overachieving lead. Norton’s fond of tics and big gestures, and he really goes for it with this character. I get the appeal—his disability works as a shorthand for both his outsider status and his vulnerability, but it ends up being as much a character note as a showy, actor-y indulgence. He also doesn’t bring a lot of imagination to the look of the thing, though fine work from the location, sets, and costume departments helps. A recreation of old Penn Station is especially impressive. 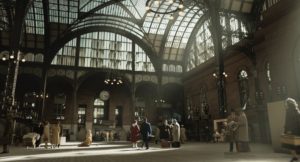 So, after all those gripes, here’s what’s still outstanding about Motherless Brooklyn:  Mbatha-Raw, who shines whenever she’s onscreen and deserves to have her name above the title in the future. Baldwin grabs his scenes with both hands. He’s a Trump-style “builder” who’s given a lot of the text that could’ve remained subtext, but he’s just so good you believe all the words tumbling out of his mouth. And Daniel Pemberton’s lovely, jazzy score knits it all together, helped by a keening Thom Yorke track.

Finally, what makes it sing is Norton’s steady, confident hand with the noir conventions. He knows what kind of movie this while avoiding cliche, and even as he telegraphs a few revelations—anyone who doesn’t see what Bobby Cannavale and Leslie Mann are up to isn’t paying attention—he’s so enthusiastic with the many moving parts of the central mystery, it’s easy to get caught up in it.