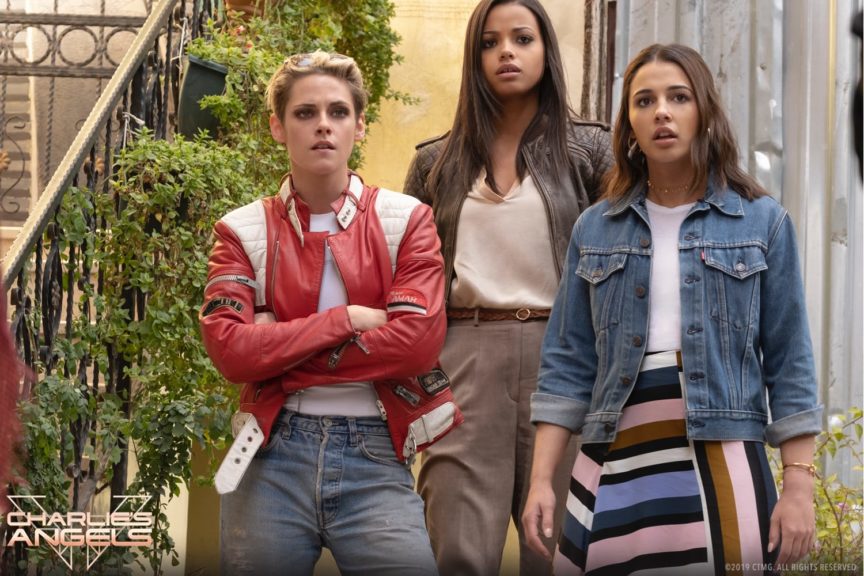 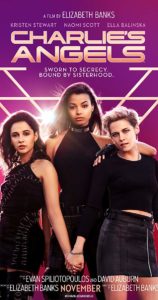 A reboot no one asked for to a movie that wasn’t so well received that last time out, the risible Charlie’s Angel: Full Throttle from 2003. The prospect of a return to this material is sweetened by Elizabeth Banks, who is a delightful screen presence and is becoming a capable director, and Kristen Stewart, who since her Twilight days has made a lot of great moves in her acting career. Her choosing this fallow franchise to hang her hat on after a few years on the indie circuit makes it a curiosity,  though with expectations set at medium. I came out having those expectations met, but just barely. 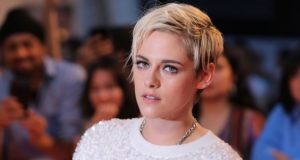 Stewart is the best thing here: She really seems to be having fun, applying her patented on-screen ease to a very fizzy, formula spy romp. She’s Sabina, the most irreverent Angel—one of an all-women team of secret agents—who’s pretty obviously gay, but the film allows just the barest nod to the character’s queer identity. It sure would be great if in 2019 they could just be overt about it, but it’s also possible I’m way too straight to pick up all the signals. She opens the film with a monologue about the choices women make, but there’s not much in this movie offering a genuinely political subtext to continue the thread. 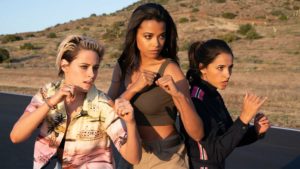 She’s partnered with a former British agent, Jane (Ella Balinska, athletic) to look into a Hamburg company developing a new energy source that could change the world, except it can easily be weaponized. Enter Elena (Naomi Scott, pleasantly flustered by all the spy games) as the audience surrogate who worked on the device and wants to blow a whistle on its issues, but is stymied by her sexist, corrupt male superiors. 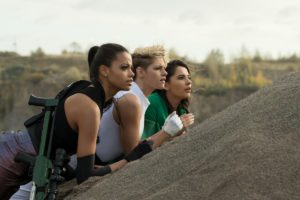 Cue the MacGuffin pursuit, a lot of rapid cutting, a car chase or two, and some fairly rote hand-to-hand combat sequences. This is fun and games, Charlie’s Angels style, though despite the pop music soundtrack and an overall light touch, it’s slightly less meta-outrageous than the past two entries. For instance, this one goes to the trouble of connecting where the organization is now versus years past, and explaining that Bosley isn’t a name, it’s a ranking, that there are many Bosleys worldwide (including Banks and Djimon Hounsou). It feels like some franchise building in the hope people will like it enough to come back for another helping. I kept thinking this material might still work best as an episodic series on the small screen—I’d tune in for weekly hijinks. 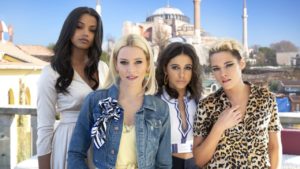 The movie doesn’t much distinguish itself in the action set-pieces, but it does provide enough witty repartee between its leads, eye-catching costume changes, and a bevy of international locations—Istanbul, Berlin, and London amongst them—to intermittently charm. You’ll need to be able to ignore a couple of irritating plot and continuity issues, and whoever wrote the line, “it’s a non-governmental NGO,” should be taken out and shot.

One other surprise worth mentioning: Kristen Stewart isn’t the only one having a ball on screen. There’s another Stewart in play—presumably no relation—a spry and game Sir Patrick. He’s a Bosley going into retirement, but he’s not quite ready to put his feet up. This audience member is grateful.