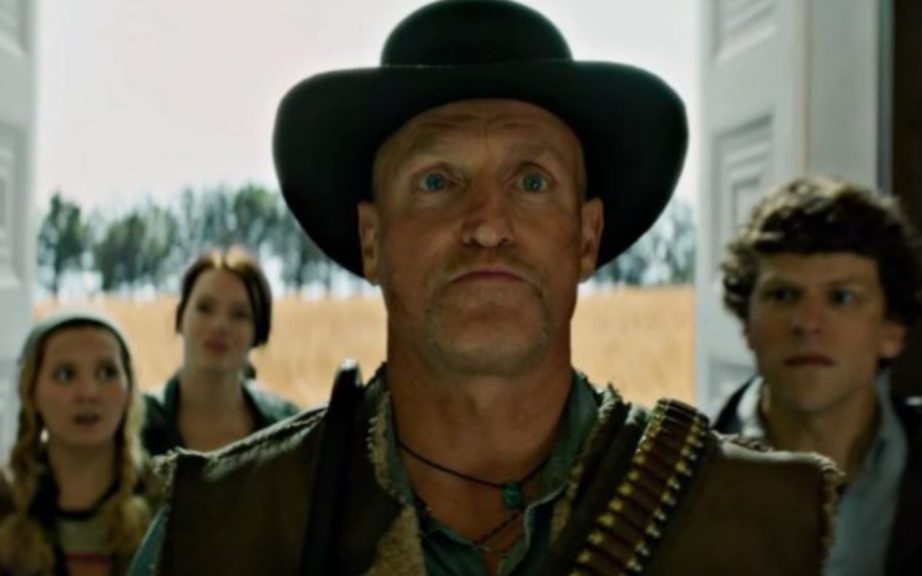 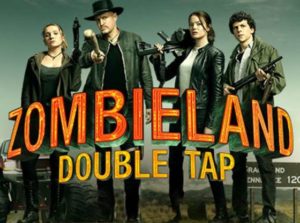 Zombieland from 2009 was, for my money,  an exquisite example of what some people call popcorn for the brain: entertaining while in the cinema, but a movie where the emotional, nutritional value is near zero.

Columbus (Jesse Eisenberg) and Tallahassee (Woody Harrelson), named for where they’re from, are two guys travelling through an America where almost everybody is a zombie. It’s like a First Person Shooter thrown up on screen as they try to find food and destroy the undead along the way. Eisenberg plays a slight variant on his virgin nerd character from a much better movie from that year, Adventureland, while Harrelson convincingly does redneck aggression. A pre-stardom Emma Stone shows up as Wichita and Abigail Breslin is her little sister, Little Rock. They make for a likeable group. A decade later, I can just barely remember seeing it.

I watched Zombieland: Double Tap yesterday. I can just barely remember seeing it. That doesn’t mean you shouldn’t go, it means the movie recaptures that familiar, cerebral popped corn feeling, with a little added butter. 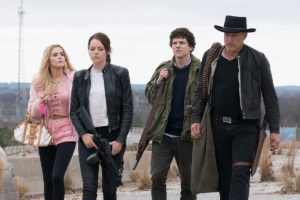 The late-arriving sequel actually starts with Columbus thanking the audience in voice-over for showing up, making this our choice for zombie entertainment given all the possibilities. (If anything, this movie is even more self-conscious than the last one, with added Walking Dead jokes.) Then he gets into how the “zombie virus” has mutated and created a bunch of more dangerous zombies (barely a thing) by comparing his naming schemata to the way “Eskimos” (ugh) have multiple names for snow. 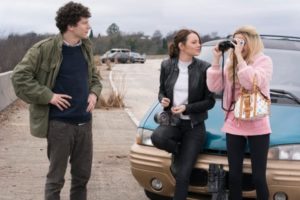 The casual inanity doesn’t get much more egregious than that. The forthcoming gags, when they hit, are surprisingly funny. It helps that the returned foursome are so comfortable together. There’s no way any of them would need to do this unlikely sequel at this point in their careers unless they really wanted to, and the ease they have with each other is contagious.

This isn’t a plot-driven zombie comedy, and what plot it has it discards pretty early on. The makeshift family holes up in the White House until (the now grown) Little Rock wants out, despite the host of brain-eaters beyond the gates. Before long she and Wichita have left, and Columbus meets another survivor, the Valley Girl-esque Madison (Zoey Deutch), while Little Rock comes across a handsome hippie, Berkeley (Avan Jogia), who wants to take her to a mythical peacenik wonderland. The best new character is Nevada (Rosario Dawson), who takes a shine to Tallahassee, but she’s not in it nearly enough. 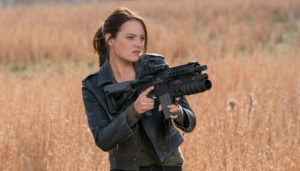 The picture takes all of this about as seriously as the first time around. The characters split and reunite and drive across the country and occasionally sing Elvis tunes. No one has much of an arc and no one we care about seems genuinely threatened by the “far-more-dangerous” zombies, so the stakes stay pretty much medium throughout. In the third act things get especially silly, but by then you’re either on this train or you’re not. The cast generates enough affection and interest to see it through to the credits (which are also worth sitting through).