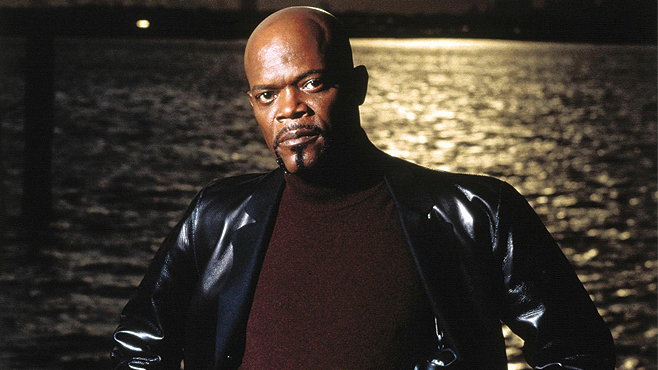 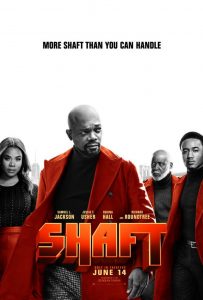 Nineteen years ago, Samuel L. Jackson starred in a reboot/sequel of the original Gordon Parks blaxploitation classic, Shaft. Now we’ve got one more, also called Shaft. This resistance to renaming, or even bothering to add a colon and subtitle, either represents a nadir for Hollywood’s imagination or just a new low in the factory town’s antipathy for its audience.

The new movie aims for a lighter tone than the earlier pictures, and Sam Jackson is always worth watching, but it ends up feeling like an anachronism. 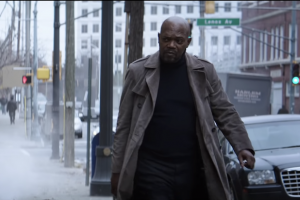 Other than a handy pre-credit sequence explaining that back in 1989 John Shaft (Jackson) once had a girlfriend, Maya (Regina Hall), a union that produced a baby, the first 20 minutes of this movie are all about JJ Shaft (Jesse T. Usher), a sensitive, modern millennial guy who also happens to be a data analyst with the FBI. When his childhood buddy Karim (Avan Jogia) overdoses, JJ and his friend Sasha (Alexandra Shipp, recently Storm in Dark Phoenix) figure he was murdered, with JJ eventually going to ask his estranged father (still Jackson) for help.

After the ’90s action vibes of the last Shaft, and the ’70s original, maybe it makes sense this one would ape the beats of an 1980s buddy cop movie, with the cheap, disposable look to match from frequent Kevin Hart collaborator Story. The older private dick has his own ways of doing business, and his son is a fussy, obsessive type who’s awkward (though respectful) with women. The picture doesn’t play its full hand at first, offering gentle humour at everyone’s expense, starting with a few well-placed fish-out-of-water gags and some fairly anodyne action beats. 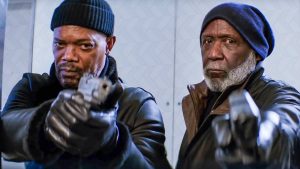 Then the elder Shaft questions his son’s sexuality, and the homophobia starts to reek. A few more cracks about JJ being “a pussy,” and you can see where we’re going, poking at the generational schism in favour of the older guy in leather. By the end, the picture’s agenda is clear: JJ self-actualizes through shooting a dude and telling The Man (here represented by Titus Welliver as JJ’s FBI boss) to go fuck himself, basically remaking himself in his father’s image. And, naturally, in this kind of movie the women end up needing to be rescued by the men.

It’s a real waste, because dropping a smooth-talking 1970s icon into a 2019 action comedy offers plenty of opportunity for self-aware humour illustrating how much we’ve all changed in 40 years. We’ve changed, right? Imagine if the filmmakers had decided to make JJ a woman, how that might have played out.

The few gags that do land thanks to Jackson’s natural charm don’t excuse a massively antediluvian approach with little sense of tone. I’m not opposed to the character of Shaft on principle—I liked the version from 2000, see below—but we don’t need any more movies like this one. 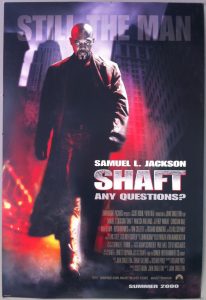 “I’m gonna fuck you up for makin’ me run!” That’s one of the gems Samuel L. Jackson gets to rattle off in the first reboot/sequel of the Gordon Parks 1971 blaxploitation classic. Another great line is, “You wouldn’t know Egyptian cotton if the Pharaoh sent it to you himself, you knockoff-wearin’ motherfucker.” Oh, and this one: “It’s my duty to please that booty.”

The late John Singleton’s film is jammed with a lot of incidental humour for what is otherwise a straight-ahead homage, jammed with Isaac Hayes’ score keeping it rooted in that ’70s feel, while paced and shot like what it is, a ’90s action picture. While it misses the zeitgeist-stoking energy of the original, Jackson delivers as the nephew of Richard Roundtree’s eponymous character, who cameos. Jackson’s a cop who runs afoul a real estate magnate’s son— shades of Donald Trump Jr — played by an uber-sleazy Christian Bale, who beats a man (Mekhi Phifer) to death in a racially motivated bar fight. One of the waitstaff (Toni Collette) saw the whole thing, but she won’t talk. 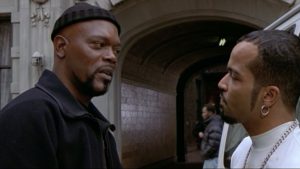 Enter Peoples (Scene-kelptomaniac Jeffrey Wright,  whose enunciation deserves its own movie), the local drug dealer with big ambitions, and a stellar cast of supporting players, including Vanessa Williams, Busta Rhymes, Dan Hedaya, Ruben Santiago-Hudson, Lynne Thigpen, and not one, but two future veterans of The Wire, Sonja Sohn and Andre Royo.

This is a rare movie where the second act is the strongest — Shaft going around making trouble and generally being badass — while every member of the ensemble around him shines. If the noisy, bullet-riddled finale is a bit of a letdown, overall it still hits its target. 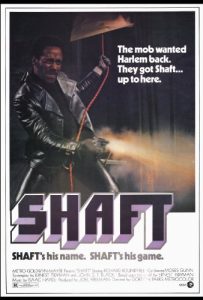 The theme song by Isaac Hayes is even more famous than the film, and the film is damn famous.  It’s the story of “the black private dick that’s a sex machine to all the chicks,” which comes with its own cultural manifest, and while it feels a bit scrappy and budget-compromised today, the picture still works as an urban crime drama with a lot of terrific location work around Manhattan.

John Shaft (Richard Roundtree) is hired by a Harlem gangster to find his missing daughter who’s been kidnapped by the Italian mob. Shaft operates between the criminals and his contacts with the police, one step beyond the law but a man who operates with a code.

Parks shoots the action sequences with style, and Roundtree has a lot of charisma — he really wears that brown leather jacket. Shaft, he doesn’t back down from anyone, and the film knows it’s making a statement about African-American culture with a hero like this. When he’s asked if he’s got any problems, Shaft says. “I got a couple of them, baby, I was born black and I was born poor.”