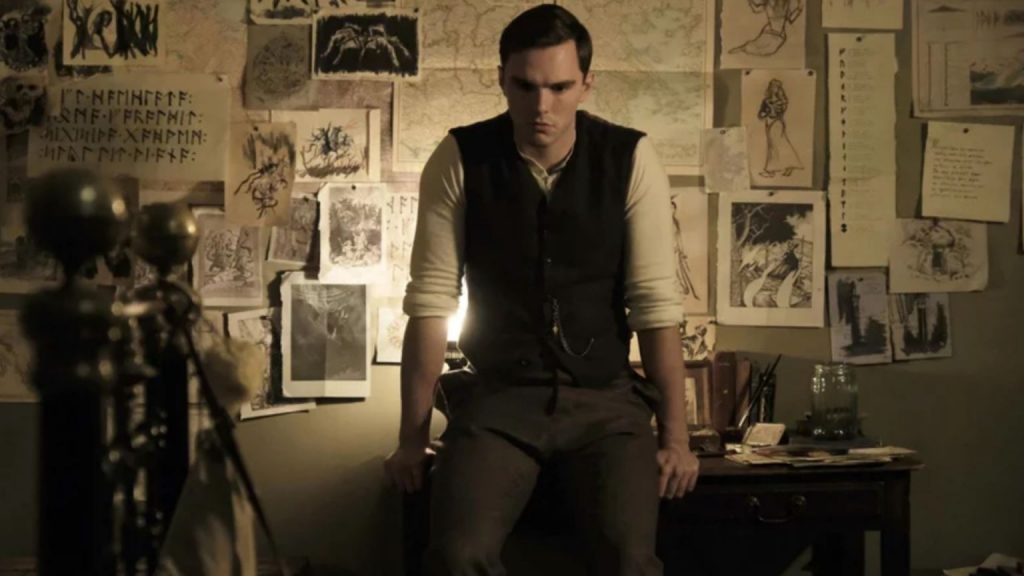 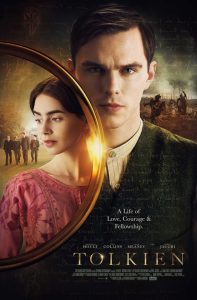 The cliches of the legendary author biopic start and end with the ways in which their personal life inspire—mirror, echo—their work. So, if a filmmaker wanted to do the utterly predictable thing, a film about JRR Tolkien would feature visions of fire and darkness, a brotherhood of four, an elfin lady, a Wagner opera, and a helpful, loyal aide named Sam. Sure enough, Tolkien manages to hit every one of those targets in this slab of middlebrow entertainment. While it painfully cleaves to formula,  the drama and craft on display occasionally lifts the material above the insipid. 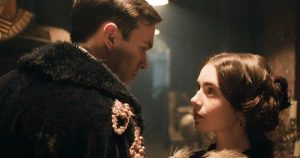 The centrepiece of the film is Tolkien (Nicholas Hoult, slowly becoming Christopher Reeve) at the Somme in 1916. He’s feverish, and as the soldiers are going over the top, he’s desperately looking for one of his best friends, Geoffrey, who is amongst the battalions either in the trenches or running toward the German guns. From there we flash back to the writer as a boy (Harry Gilby), his brother (Guillermo Bedward) and sick mother, Mabel (Laura Donnelly). The boys are orphaned, but taken under the care of a kindly priest (Colm Meany), and placed in a foster home with a young woman, Edith (Mimi Keene), who grows up to be Lily Collins.

The love story almost sinks this thing. There’s no heat between these actors, and the writing never gets beyond saccharine teen romance. Collins’ Edith is never fully fledged—she apparently wants to be a pianist, but she’s really just there to encourage his imagination. 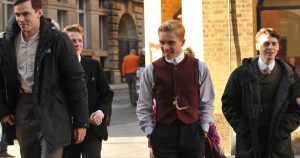 What works is the dynamic between the four friends. Tolkien bonds with three pals at private school, and when they all go to Oxford and Cambridge, the fellowship continues. Both the young actors (Albie Marber, Ty Tennant, and Adam Bregman) and adult counterparts (Patrick Gibson, Anthony Boyle, and Tom Glynn-Carney) get the best lines and the best chemistry while surrounded by the most sumptuous sets and costumes—watch for the scene in a snooker room with crystal brandy snifters—all swaddled in Thomas Newman’s lush score. If it had been just about Tolkien’s school days and friendships, this would’ve been a much better film—and I wanted more of their delightful connection.  Derek Jacobi also gets to drive the film’s best scene; as linguist Joseph Wright he illustrates the wonder of language through the etymology of the word “oak.” 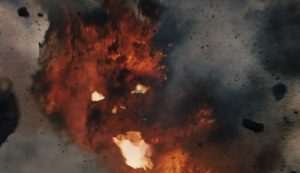 Eventually we get back to the battlefield, and while the visuals occasionally impress, the filmmakers’  need to shoehorn shades of Sauron and dragon-fire into the smoke pushes the proceedings into puerility.

These signposted references make this picture hard to recommend, and since the Tolkien estate has disavowed it, there may be other good reasons to avoid it. But, it also has the air of reverence and comfort—it’s desperate not to offend. If you stumbled upon it one Sunday evening on PBS, it would be an easy watch.