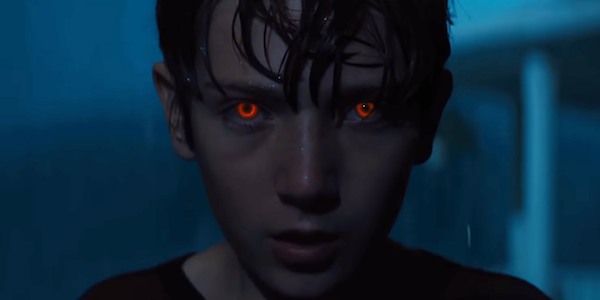 Superhero comics envisioned an evil Son of Krypton, or something like it, years ago—check out Miracleman by Alan Moore. Someone with extraordinary power who’s unencumbered by human feeling, free of excuses. Yarovesky’s vision of the story isn’t original—and you can just imagine how closely the DC/Warner Brothers lawyers have been watching—but it is worth pursuing as a feature film: What if Kal-El-like boy, who discovers his powers at age 12, is a psychopath? It’s too bad then, that the picture scuppers the execution of a decent concept. 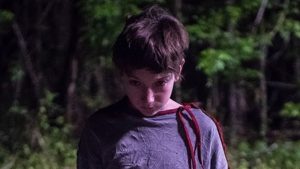 We meet Brandon Breyer (Jackson A. Dunn) just as he’s hitting that tween age, and he’s a good kid. His parents, Tori (Elizabeth Banks) and Kyle (David Denman) of Brightburn, Kansas, have raised him on a farm. They’ve told him he’s adopted, and try to keep him away from guns. But the thing locked underneath the barn, it’s glowing red, and it’s sending weird messages to the child it brought to our planet. Brandon’s starting to misbehave, and lie, and hurt people with unexpected strength and abilities. 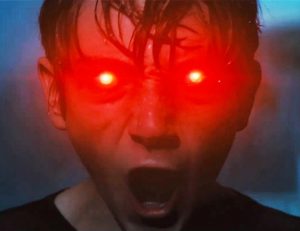 The premise offers a great opportunity to explore issues around nature versus nurture. If an extraterrestrial child with superpowers was sent to Earth to infiltrate and destroy, what would wholesome midwestern values have done to maybe help deprogram him? Or a sweet classmate? Or a mother’s love? It would’ve been fascinating to see Brandon face genuine struggles coming to terms with who he is, or who he’s meant to be, but that’s not the way this movie wants it to go down. He’s simply Damien Thorn from The Omen, the Antichrist, crossed with an immature Superman—two 1970s Richard Donner pictures, coincidentally—and he’s suddenly a total psychopath. 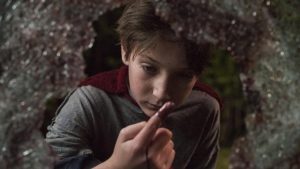 The direction isn’t terribly gripping, either. We get a few convincing jump-scares, creepy moments, and a reasonable amount of gore—but when the superpowers are genuinely unleashed, there’s nothing here we haven’t seen done better in movies like Chronicle. Denman and Banks are likeable enough, but not so much that you’ll feel for them when they’re threatened by this unexplained, terrifying force that they raised since the spacecraft delivered him. 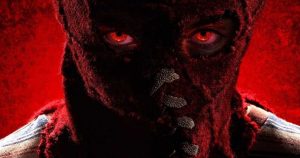 And what’s the real fear Brightburn is tapping into, anyway? A parent’s fear of raising a monster? Or is it some kind of conservative anxiety—the illegal aliens coming to America to kill us all? Either way, it feels like a missed opportunity for something better.