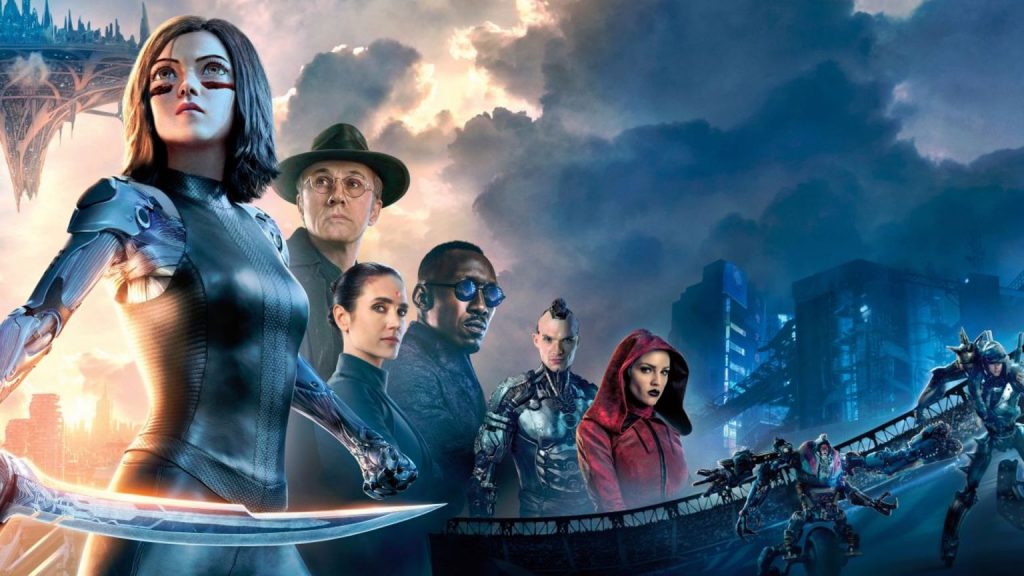 Directed by Robert Rodriguez | Written by Rodriguez, James Cameron, and Laeta Kalogridis, based on the graphic novel by Yukito Kishiro | 122 min | Crave Plus 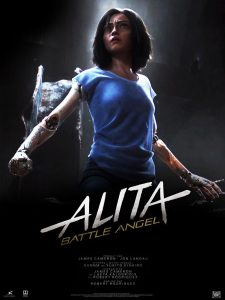 I know it’s only the middle of February, but I’m trying to remember if there’s been one solid feature film from Hollywood in the past six weeks. One even halfway memorable movie. I gave the Lego sequel a passing grade, but even though I saw it just a few days ago, it’s flown out of my head. The Upside wasn’t awful, but it’s not a movie I’ll ever want to watch again. Maybe there’s better one’s that I’ve missed, like On The Basis Of Sex. (If you’re looking for something now showing at the cinema, consider the Oscar-nominees that were released at the end of 2018, especially this one and this one.)

The point I’m making is that Alita: Battle Angel doesn’t break the streak—the big-budget, long-delayed science fiction fantasy delivers an eye-catching production design but falls to pieces most everywhere else. 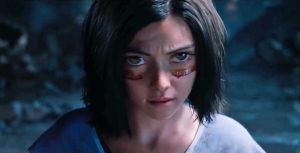 We’re off in the future, 300 years after “The Fall,” the war that destroyed everything but this one city in the sky, Zalem, and the slums down on the ground, Iron City, where everyone works to keep Zalem running, but almost no one gets to go up there. Yes, it’s very much like Elysium, which isn’t a great start. reference-wise, but don’t worry, there’ll be plenty of other blatant homages/rip-offs, including Terminator, Robocop, Total Recall, AI: Artificial Intelligence, and any number of Frankenstein iterations. There’s also a huge debt owed to a sports-science fiction amalgam from the 1970s, but more about that in a second.

Robotics expert, medical doctor, and bounty hunter Dyson Ido (Christoph Waltz) finds the remnants of an advanced cybernetic organism discarded in the junk pile that lies beneath the city in the sky, and discerns this is tech that’s been forgotten about, stuff from pre-war. If it’s so special, why was it thrown out? That’s never really explained, one of a number of dodgy plot issues. Dyson adds to the head a torso and legs he had lying around, and voila, Alita (Rosa Salazar) is reborn, a largely CGI creation with huge manga-esque eyes. She’s playfully fun, with no memory but deadly physical skillz, a master of a (presumably German) martial art known as Panzer Kurst.

Salazar brings a lot to the character, balancing the innocence with the heartfelt and determined, making her someone we can root for, and Waltz is typically reliable, but it doesn’t take long for them to get lost in the weeds of unnecessary plot convolutions:

Cybernetic slum dwellers are getting their parts ripped off by a gang, Dyson spends his nights out hunting for criminals, butting heads with a subculture of greasy hunter warriors like him, mostly robotic, including Ed Skrein and an unrecognizable Jackie Earle Haley.

We also spend a little time with a popular local sport, Motorball—with no backstory on how it manifested or even if it’s also enjoyed by the people who live up in the sky. It’s basically Rollerball, and we meet the shady folks who supply the cybernetic enhancements to the players, Vector (the very busy Mahershala Ali), and Chiren (Jennifer Connolly), who also happens to be Dyson’s ex. Oh, and beyond them, there’s a shadowy villain named Nova pulling the strings.

If all that wasn’t enough character and circumstance to keep Alita busy and us interested, there’s also a cute boy, Hugo (Keean Johnson), who shows Alita how to play Rollerball… sorry, Motorball, 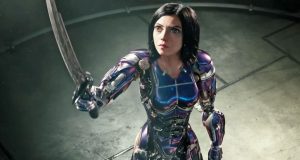 The romantic elements in the picture are painfully moist, making everything around it feel like it’s condescending to pre-tween girls. The coming-of-age structure isn’t necessarily a bad thing, but it’s all terribly clunky and mishandled. Rodriguez’s Spy Kids franchise, also aimed at young audiences, was much smarter and funnier than this, so he has no excuse for delivering material this lame. Cameron really should know better, having made soapy romance palatable for the whole planet in Titanic.

Where the picture sporadically shines is in action sequences, with Alita’s hardwired fighting skills showing up a series of cybernetic tough guys. That’s pretty cool, but other scenes, like the inevitable Motorball bout, feel more like something out of Speed Racer, total computer-generated nonsense, unpleasantly dizzying in pointless 3D.

An emotionally satisfying ending, say with Alita leading a revolution on Zalem, might have helped forgive some of the earlier missteps, but the open-ended presumption of franchise-building, coupled with an Edward Norton cameo, is a terribly misjudged twist, quashing any remaining audience goodwill. 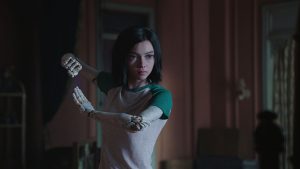 If this is what James Cameron thinks makes a satisfying sci-fi tale, he’s been huffing Pandora pollen with the Na’vi for too long.