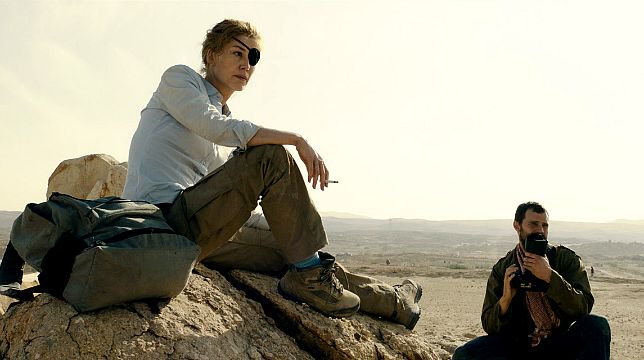 Directed by Matthew Heineman | Written by Arash Amel, based on a Vanity Fair article by Marie Brenner | 110 min 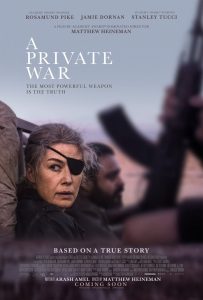 Matthew Heineman is the award-winning documentarian who made the gritty drug war doc Cartel Land. This is his feature debut, and it’s a perfect pairing of material and filmmaker—he tells the story of the final decade in the life of Marie Colvin, a seemingly fearless American foreign affairs correspondent for the London newspaper, The Sunday Times. It’s hard to fault this docudrama for its interest in paying homage to this heroic journalist, but that wouldn’t impress if it didn’t drive home the human cost of armed conflict, which it does, repeatedly. 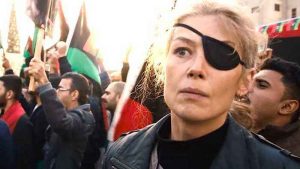 Rosamund Pike is Colvin. It’s interesting to see Pike’s choices for roles recently, in Beirut, 7 Days in Entebbe, and A Private War, all docudramas set in or around the Middle East. Of those three projects, this is by far the most successful, and her riskiest character: she depicts Colvin as a chain-smoking, twitchy perfectionist, with gravel in her voice and nicotine-yellowed teeth. The risk pays off, and before long it becomes clear Colvin’s drive for the story, her grit and courage, is counterbalanced by the chronic impact of PTSD, self-medicating alcoholism, and struggles in her private relationships. One of her colleagues suggests her attraction to this highly dangerous work is like an addiction. That colleague is freelance photographer, Paul Conroy, played by Jamie Dornan. best known for the 50 Shades pictures. This is his best work yet, offering a deeply felt performance—where Colvin is sharp and, arguably, reckless, Conroy is quietly compassionate, showing his fear on the surface where she buries hers. Conroy’s also good at his job, and he and Colvin team up to get the stories in the world’s most dangerous places.

The film starts in 2001 with Colvin in Sri Lanka, where she lost the sight in one eye from a grenade. Then we flash forward to Iraq—where an earth-mover disinters a mass grave, bringing closure to a grief-stricken community in the desert. Then to Libya—where soldiers had been ordered to rape women—and an interview with Muammar Gaddafi. (In real life, Colvin was joined in that interview by her friend, fellow correspondent Christiane Amanpour from CNN. I’m not sure why Amanpour is not part of the scene in the film, but I understand she’s a supporter of the film and has hosted a screening in London.) We also spend time in Homs, the city in Syria destroyed by conflict, which Colvin called the worst war zone she’d ever seen. 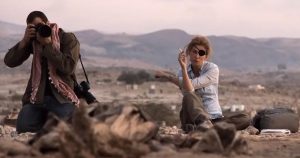 It’s a delicate balance, to tell the story of the person reporting on these horrors, while being true to the perspective of the people who are the real victims of that horror, but the film feels honest to a fault. If it stumbles at all, it’s in some of the expositional dialogue, especially in the first act where, in places, it’s a little too earnest to be credible. As it progresses, the picture finds its tone.  A Private War doesn’t soft-pedal any of the scenes of violence or bloodshed—this is intense stuff, and it’s easy to see how anyone continually putting themselves in harms way to get a story would build up a personal mountain of trauma, and would need increasingly sophisticated coping strategies to keep doing this work. 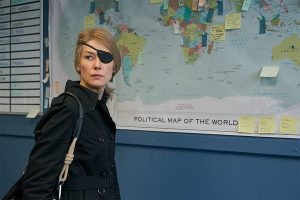 This is the most frank depiction of what foreign correspondents go through to get their stories since films like The Year Of Living Dangerously, Under Fire, and Salvador in the early 1980s. Full credit to the exceptional work from Pike, Dornan, and in support, Tom Hollander.