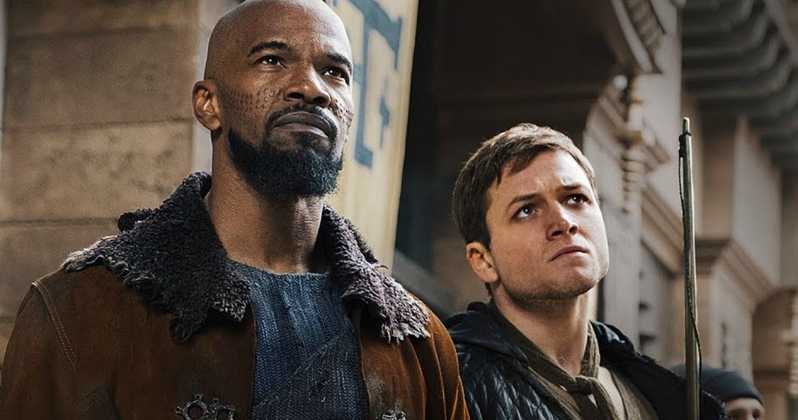 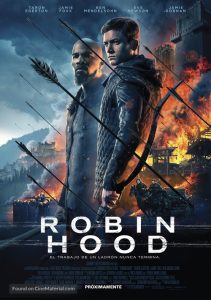 One of the reasons myths and folk tales are so popularly adapted—along with the ease with marketing a recognizable, yet public domain brand—is their elasticity. You can update it, change it, as much as you like, so long as you’re true to the themes of the story. That might be the biggest flaw in this largely awful new effort, it takes liberties that depart from what makes Robin Hood so enduring.

Director Otto Bathurst, whose first feature this is, following a lot of British TV,  is terribly interested in making it kinetic, modern, and relevant. That means we get a steampunk Nottingham, and having the young, wealthy Robin of Loxley (Taron Egerton) conscripted to fight in the Crusades, though weird that the Sheriff of Nottingham (Ben Mendelsohn) signs the draft notice.

Anyway, Rob goes off to battle in a vaguely middle-eastern land, where the enemy uses massive, machine-crossbows—it looks like every dusty Iraq or Afghanistan war picture we’ve seen since 2003 that was actually shot in Jordan or Morocco. Rob is appalled at the inhumanity of his fellow warriors and tries to protect the life of a prisoner, eventually heading back to England after being wounded. The prisoner follows, befriends Robin, but his Moorish name is too difficult to pronounce so he’s dubbed John (Jamie Foxx, who should really know better than show up in crap like this). 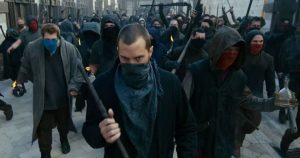 When he gets back, Robin finds his girlfriend, Marian (Eve Hewson), with a new man, Will (Jamie Dornan), who’s something of a community organizer. Robin gets trained to improve his bow skills by John, and immediately sets out to steal from the town, the Sheriff, and the church (here personified by Ian Peck and F. Murray Abraham) by night under the hood, while by day he hobnobs with the wealthy town folk, offering ransoms for the The Hood’s capture. It’s so Bruce Wayne of him.

Just like Dracula Untold tried to turn the legendary bloodsucker into a superhero with godawful results, so too does this revisionist Robin Hood want to make the mythical hero an avenger of the night. It’s stupid, and it doesn’t work. Forget him as the forest outlaw with a band of merry men living in the woods, this is shot in Dubrovnik, giving it a medieval urban setting adjacent to hellish, CGI mines where the poorer townsfolk work. Cue up glamorous parties and variants on roulette, and garb that feels more 1990s than 1390s. 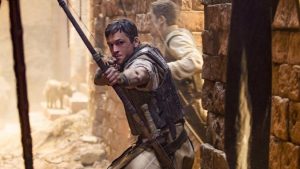 If you can find things to enjoy here—and it’s certainly not in the dialogue, the plot, or the performances—it’s in some of the action. The budget here is high enough to deliver a few decent action sequences, but there’s also a lot of mess, edited out of coherence.

So much of it is dire. Character motivations are fuzzy, plot holes are catapult-sized, and Egerton’s limitations as a leading man are starting to show as he tries things beyond being a callow, athletic punk in those Kingsman movies. Maybe with the right role he can shine—he reminds me a little of Mark Wahlberg, a performer who’s range is limited but who’s been smart choosing roles that work for him. Here, Egerton convinces in his physicality, but in no way is he an inspiring leader. Dornan is much more charismatic. Mendelsohn is becoming who Mark Strong was 10 years ago, playing every villainous role offered to him in Hollywood. (No coincidence Strong was a heavy in the last Robin Hood movie, Ridley Scott’s dour 2010 effort.) The script gives Mendelsohn a single scene where he’s offered a backstory of abuse by the church, but he still works for them. And Hewson, who’s been good in other things, isn’t much more than a pretty face in this picture, and may be the only woman in the film with a line of dialogue. It’s not her fault, really: she’s introduced as a thief, but that part of her character is conveniently forgotten when later she becomes someone else Robin must save. 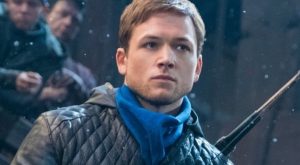 To offset the tedium in the cinema, I wondered after Robin Hood’s political leanings. I’m sure there are plenty of arguments for the right and left, but in 2018 this is very much the populist Robin. He’s a veteran, and he’s been raised rich, but while his MO is wealth redistribution, he’s really fighting against big government, especially when the government secretly supports the enemy with its high taxes. And that community organizer and Liberal stand-in, Will, he’s just a facial disfiguration away from being as bad as the rest of them. Ugh.