Though I’d seen it before on a screener, I poked my head into the first Extreme Screening of the festival on Monday, Mandy. I really just wanted to see some of those visuals on the big screen, and get a sense of the audience reactions, but I found couldn’t leave. I got there just at the bathroom scene—those who’ve seen it will know what I’m talking about—and that amazing score just rooted me in the cinema with a giddy anticipation. A few friends and cinepanions emerged at the film’s end, and amongst them it got a mixed reaction, but I really dug it. I’m someone who doesn’t see a lot of gory exploitation horror, and I feel like I saw the one this year I really needed to see. 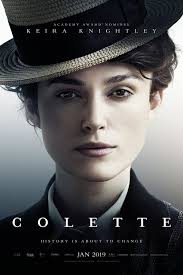 A period biopic of the famed French writer, starring Keira Knightly. I’d heard great buzz, so I gave it a shot, and in the first act I was a little dubious. It hit all the traditional biopic notes, from the whiskers to the corsets to the oppressive patriarchal attitudes to Knightly herself. She’s done a few of these, enough that she could be considered typecast, and otherwise there wasn’t much in the opening of this one that lent it distinguishing marks.

But right around the beginning of second act, things get interesting. Gabrielle is a country girl drawn into Paris by marriage to a charming, caddish man, Willy (Dominic West, speaking of typecast), a writer who gets by on sensationalism rather than talent. Gabrielle is infuriated with his infidelity, but they reconcile, and she discovers what works for the gander, and starts an affair with an American woman. Not one to be outshone, Willy starts up with the same woman. This while money is short, and Willy increasingly relies on Gabrielle, now going by Colette, to write his bestsellers, and she hits the motherlode with a series about a country girl coming to the city entitled Claudine. Success, and an open marriage, keeps them together, and those modern attitudes make the film hum. 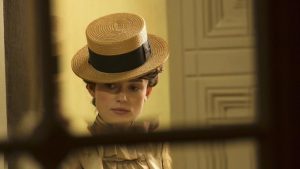 Though the trailer indicates the blood of this picture is in the fight for authorship, that isn’t really a part of it until the third act. Most of the second is about Colette coming to terms with her role in the marriage, her creative spirit, and her extramarital relationships, including one with Missy (Denise Gough), a woman who likes to wear trousers—very Georges Sand. 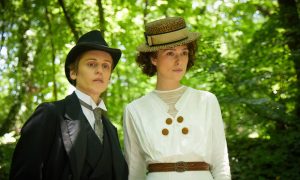 By the end I was entirely on board with this film. For a fin de siecle drama, it gracefully manages to be relevant and have plenty of things to say to our 2018 reality, painting Colette and her fluid sexuality as a hero for our times. It also gives both Knightly and West some of the best roles in their careers thus far. 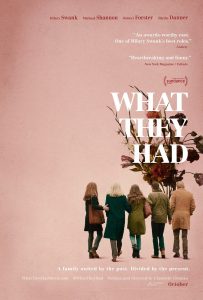 There were a few times watching this I thought back fondly on a remarkable family cancer drama, One True Thing, which coincidentally opened in cinemas 20 years ago today. When I need a good weep, Meryl Streep and Renee Zellweger manage to do it for me. Writer-director Elizabeth Chomko is stabbing her needle into a similar vein with What They Had, a dementia drama, but doesn’t draw nearly as much blood.

Her lead is Hilary Swank as Bridget, who everyone calls Biddy. (Is that a nickname that actually exists? It sure is a bad one.) Bridget is a really problematic character, as she spends the movie mostly inert, largely passive, which kills our affection for her. She lives in California in a marriage that seems to have stalled, with a daughter (Taissa Farmiga) who she doesn’t understand. Her mother (Blythe Danner) back in Chicago has some sort of dementia, and her brother, bar-owner Nick (Michael Shannon), thinks it’s time for her to go into a care facility. That’s over the dead body of Dad, the god-fearing Burt (Robert Forster, whose performance is the best thing in the picture). 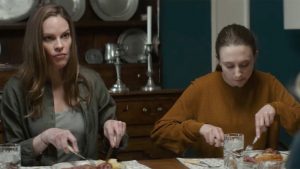 Cue a lot of predictable family squabbles. Nick is tough, crusty, but realistic. He calls Biddy in because she’s got power of attorney, but all she tries to do is smooth things out between arguing characters without offering much forward momentum. It doesn’t take long before we’re begging her to stand up to her father, to make some kind of decision, but it takes a long time to get there.

That’s not to say this is all bad, far from it. There are surprising moments of humour, and some sharp dialogue in the exchanges between Biddy and Nick. As usual, Shannon doesn’t put a foot wrong, but it’s not enough. By the time the film delivers the hammer and death visits the family, it badly bungles the scene, first by initially confusing the audience around who is dying, and then by aiming for cliche.