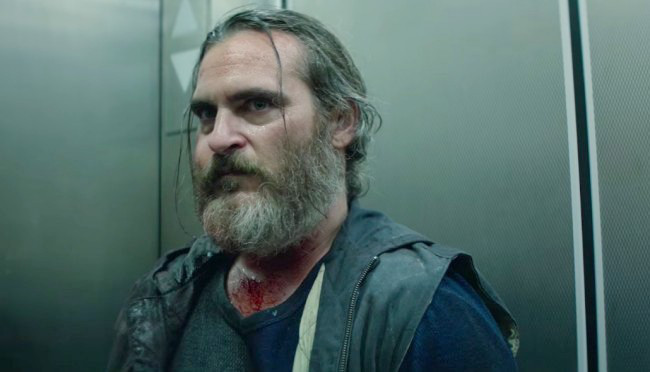 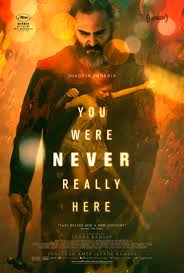 At Cannes last year the jury gave this film’s lead, Joaquin Phoenix, the Best Actor award, and filmmaker Ramsay the Best Screenplay. The film also received a seven-minute standing ovation at its Cannes screening. All three recognitions were deeply deserving. This is a wildly impressive feature from the Scots director, her fourth in 18 years.

Phoenix is Joe. He uses his physical skills—perhaps learned on the battlefield, the snatches of flashback are a bit ambiguous—to rescue victims of sex trafficking. His methods are direct, and utilize a ball-peen hammer.

He’s also a deeply damaged individual. He meditates by wrapping his head in plastic and hyperventilating. He plays with knives. Amongst those brief moments of flashback we see a childhood with a domineering, violent father. Maybe the only thing keeping him from suicide is a responsibility to take care of his ailing mother (Judith Roberts). 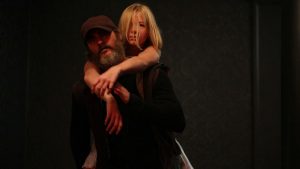 The first half hour is here is character study and set-up. Phoenix gives it his all, and it isn’t pretty. Ramsay also takes a deep dive into atonal sound design and urban visual sandpaper. She engineers tone inspired by the masters—there’s more than a little Polanski, Kubrick, and Scorcese in the the way the film stalks Joe, tracking him in a dangerous environment of alleyways and late-night human detritus. Composer Jonny Greenwood’s score somehow manages to channel both Grimes and Jerry Goldsmith’s Chinatown soundtrack. Greenwood’s versatility is impressive if you consider what he delivered for the Oscar-nominated Phantom Thread score, as well as his work in Radiohead, and this is film is a perfect canvas, as interested in the soundscape as it is in its visuals.

When the plot kicks, and it does with little warning, the picture will crush you in your seat. 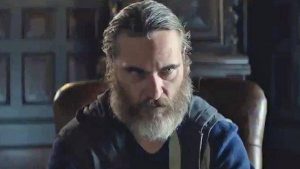 You may have heard it’s unbearably violent; it isn’t. It’s unbearably tense. There are only one or two instances where the violence and bloodletting are explicit—an attempt at-home dentistry had folks scurrying out of my screening—but much of the actual savagery happens off-screen or viewed at a distance, partially obscured. What Ramsay does is take that first third of the film to prepare us, letting us know this world could explode any time, without warning or recourse, and then the rest of the movie is said explosion. Joe is on the ragged edge of his life, and we don’t know what he’ll do or what he’s capable of doing.

This is a textbook of suspense, of character, and typical of the lean, challenging filmmaking Ramsay has delivered in her career. She provides only the skeletal evidence of story and forces us to piece it together as we go along. She expects us to keep up. It’s one of the best compliments a filmmaker can pay to their audience.

While this is one of the best films of 2018 so far, it’s not for those of a delicate constitution. Personally, I can’t wait to see it again, but it’s the definition of “not for everyone.” Too bad, really, because this kind of imagination and vitality we see too little of in the cinema.