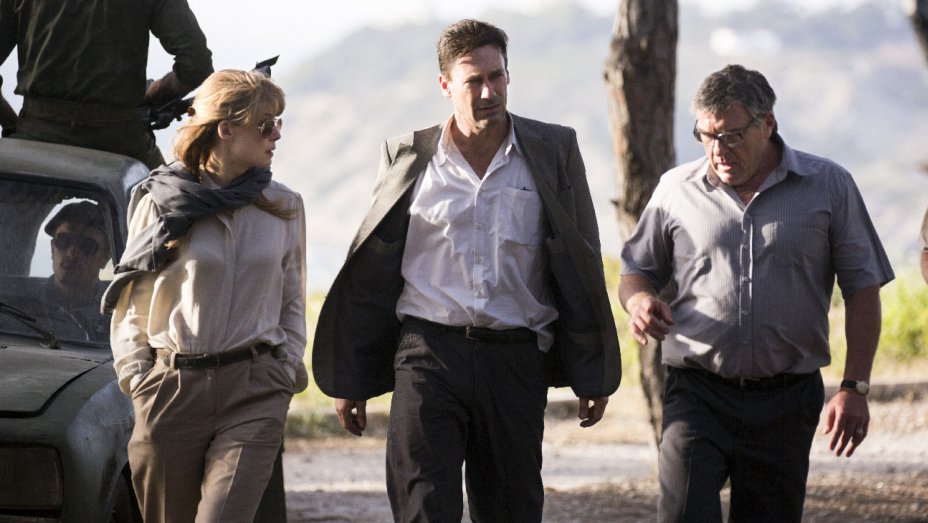 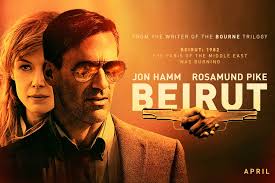 Reportedly, the script for Beirut has been sitting in Gilroy’s drawer for 25 years, which  maybe explains its dusty politics or the fact it feels a little anachronistic—maybe something Michael Caine would’ve starred in during one of those periods in the 1980s when he said yes to any project that came across his desk. That’s not to say the screenplay doesn’t have bite, but otherwise there’s an emptiness here, and it’s hard to have a strong feeling about where it takes you.

Beirut also runs smack into the fallacy of Jon Hamm The Movie Star. Hamm is a talented actor in a Gary Cooper vein, with some under-utilized comedic chops, too, but you cast him as Skiles, the untrustworthy CIA station chief (the kind of characters he’s surrounded with here) or the angry ex-husband, along with other talented, good-looking guys like Billy Crudup or Luke Evans. You don’t pick him to carry a movie as the alcoholic former ace negotiator. You maybe get Russell Crowe or Sean Penn, instead. Hamm doesn’t convince as damaged goods or a soul tortured. Most of the time he just comes off as hung over.

We start in “the good old days,” 1972, pre-Lebanese Civil War, when Skiles was your average cocktail-party throwing diplomat married to a local, and then shoot forward 10 years when he’s a shell of a man living in the States, called back to Lebanon to help broker a prisoner swap—where one prisoner is an old buddy of his and the other is a terrorist with a hand in what happened at the ’72 Munich Olympics. The Americans still at the station (including Shea Whigham, Dean Norris, and Rosamund Pike) figure Skiles’ experience could be an asset. If it doesn’t work, he’ll be their stooge. 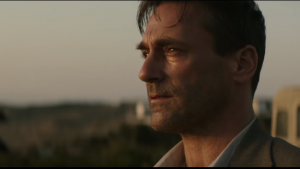 The actual mechanics of the plot and its mendacious lot of spies, fanatics, and functionaries is what grabs and holds the interest—Gilroy did write the Bourne movies, as well as that master-class in thriller geometry, Michael Clayton. His understanding of the political potboiler is as good as anyone alive, and he delivers regular surprises, reversals, and suspense. When Skiles isn’t feeling sorry for himself, Hamm gives him a chance to shine, convincing as someone who’s got the card-sharp skills to in one moment negotiate with the cagey Israelis, and in another try to talk down a young man who’s just executed one of his comrades with a bullet in the back of the head. Pike is also good, as she always is, though the movie could use more of her.

Anderson, who’s done a lot of prestige TV work in between his odd feature (Last Stop Wonderland, Transsiberian, The Machinist), provides enough location flavour, sound, and vision to make present-day Morocco pass as the the Lebanese capital of years ago—that we see in stock footage at the film’s beginning and close. 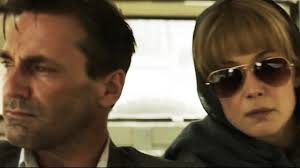 What Beirut lacks is authenticity beyond its stylistic trappings.  The singular absence of redemption is a hole in its core, and the message that killing in the Middle East will just continue ad nauseum and Americans will do their best to manage/exploit it, that doesn’t do much for me—especially not this week with the missiles flying over Syria. It’s not a story that really needs telling beyond the 24-hour news cycle.

Furthermore, with the recent release Isle Of Dogs drawing accusations of cultural stereotyping, should we consider the historical fiction of Beirut any differently?