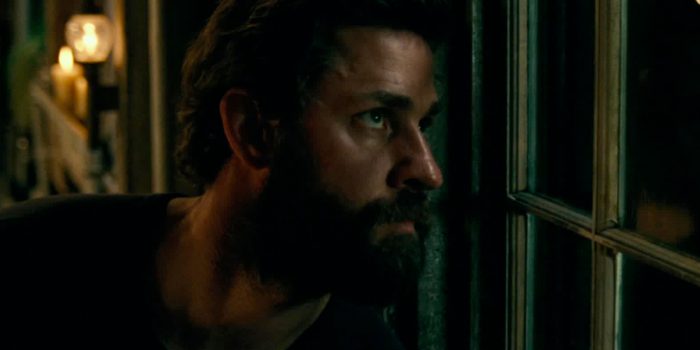 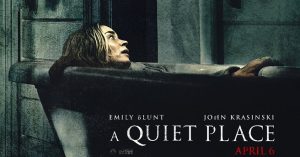 Not long from now humanity is going to have our collective head handed to us by larger, more ferocious versions of the critter from Stranger Things. These suckers hunt purely by sound. Not sure if they’re entirely blind or have no olfactory senses to speak of, but they can hear a kitten fart at 100 paces.

The Abbotts (parents Emily Blunt and Krasinski, with kids Millicent Simmonds, Noah Jupe, and Cade Woodward) have managed to stay alive by being smart and staying silent. They communicate with sign language, and take every sound-muffling precaution you might think of and a few you probably haven’t. As they prepare for the arrival of a new baby—including the creative measures to keep it quiet—one of the older kids is struggling with guilt while her father tries to fix a hearing aid with the most basic of tools.

If this sounds like a short film—or, at best, a Twilight Zone episode—stretched to feature length, you’re not wrong. 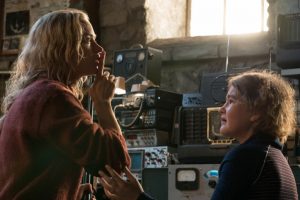 But props to Krasinski, still probably best known as a comedic actor and Jim from The Office, for his effective handling of both suspense and character in this reasonably simple sci-fi horror premise. No effort is expended to explain the origin of the monsters, nor how noisy printing presses kept working making those many newspapers while the monsters were about, nor how more than a year after their arrival people in rural areas still have electricity. But maybe none of those small details really matter too much while the film manages to drive home a touching note about what children mean to their parents.

The MVPs here are clearly the 19-strong sound department for their remarkable design and editing, along with Marco Beltrami, the score’s composer, who delivers both a conventional Feel Sad For This Poor Family string and piano suite along with The Hellbeasts Are Upon Us bowel-shaking doom-tunes.

While it’s a solid creepfest, A Quiet Place is a ways from perfect. The picture has a problem getting across some plot logic, like why the father won’t allow one of the kids into his basement to see what he’s working on. Why is that such a big secret?

A lot more problematic is a decision to let the audience know the monster’s kryptonite before the characters figure it out. In a picture like this you never want to be a step ahead of the characters unless it’s for reasons of pure suspense. This particular detail doesn’t qualify because it makes the characters looks stupid. Even worse when people die because someone in the movie hasn’t put together what it is that scares off the beasties, while every single person sitting on this side of the screen has figured it out. 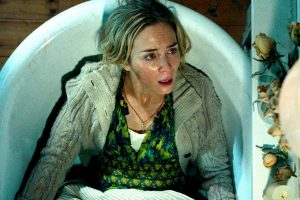 Still, it’s an involving, even moving, hour-and-a-half delivering a handful of good scares, an impressive handling of concept and material by a neophyte director. Will look forward to whatever else he delivers down the road.