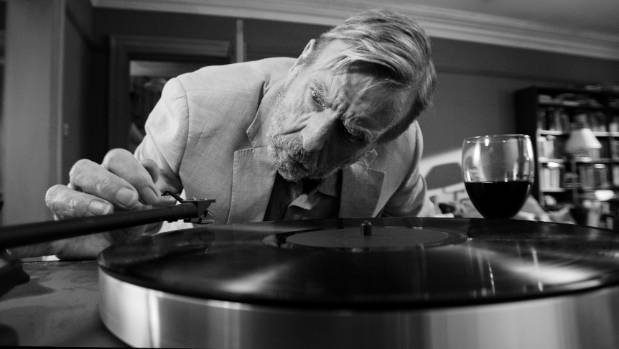 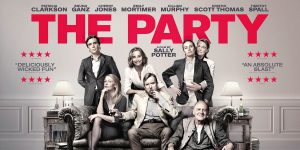 It’s not often I actually regret sitting through a movie, given my passion for the medium, but the greatest mercy Sally Potter’s The Party bestows on audiences is its brevity, which, in this case, barely approaches the soul of wit. Patricia Clarkson is its only saving grace—the few good lines roll off her wonderfully cutting tongue. Otherwise, this is a wretched film, fingernail torture masquerading as satire, a tedious, stagey, and wasted hour-and-11 minutes. 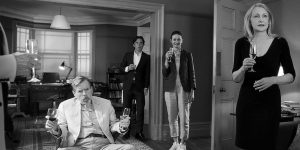 It’s hard to believe this enterprise could be so awful with a cast this stacked with talent—along with Clarkson there are six, Kristin Scott Thomas, Timothy Spall, Bruno Ganz, Cherry Jones, Emily Mortimer, and Cillian Murphy—captured in fetching black and white cinematography by Aleksei Rodionov. But watching this group rail and chew at each other in three rooms and a backyard is about as much fun as a colonoscopy by ladle.

Thomas is Janet, a politico thrilled to finally have become the British health minister, holding a little gathering for her nearest and dearest in her London home. Except it’s entirely as if these characters have never shared a conversation before, let alone any wisp of human affection—they’re walking and talking ideology pretending to be characters. Within 10 minutes one reveals a pregnancy, another reveals a terminal diagnosis, and two are having affairs. Everyone is spiteful, bullying, and entirely implausible. 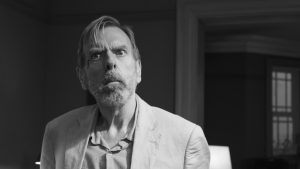 There’s a patina of political intrigue and class-skewering going on, but none of it is even a little bit funny or engaging, except, as I mentioned, Clarkson’s bitterness and cynicism as April, Janet’s best friend. Spall’s performance consists largely of gazing slack-jawed into space like a lobotomized basset hound, while Ganz does an impression of a deflated Yorkshire puddling. Jones and Mortimer may be the most unlikely lesbian couple in film history, made more confusing as one calls the other “Mother,” and Cillian Murphy manages to give revenge-fuelled, coked-up bankers a bad name. I’ve always loved Thomas, but not nearly enough to feel anything for her gnashing here. Characters yell lines of dialogue out to the room, and make stupid excuses for not leaving. If this was an adaptation of a play, like Carnage, you could almost understand its stagey approach—but then I hated Carnage, too. 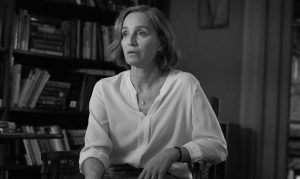 When a final twist arrives, it’s empty and pointless. The only thing that would’ve thrown the whole affair into knowing absurdity would’ve been a bloody shooting rampage—a pistol is introduced very early on, so I had my hopes up—but no such luck.