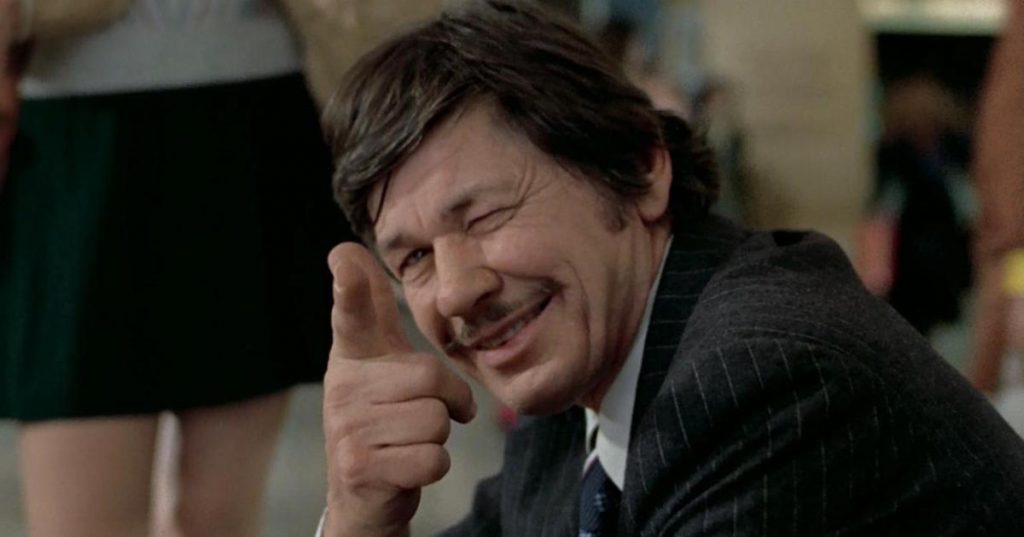 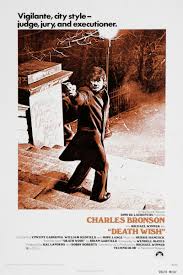 2018: Directed by Eli Roth | Written by Joe Carnahan from the Brian Garfield novel and the 1974 film screenplay by Wendell Mayes | 107 min 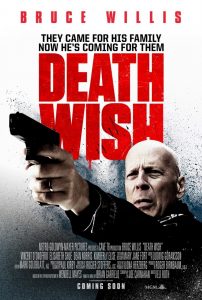 I recently rewatched the first Death Wish, and found the Michael Winner film to be not nearly as obnoxious as some reviews had led me to expect. Winner directs the film with style—it has a great soundtrack and a certain grubby authenticity that only shooting on location in 1970s New York can deliver. Something about its reactionary politics feels set in that time and place in a way that makes it feel like a western transposed to the urban jungle, and that’s driven home by the casting of western star Charles Bronson.

This hugely popular vigilante thriller spawned four sequels going into the 1990s. Bronson was in his early 50s when he first took on the role of Paul Kersey, a New York architect whose wife and daughter  are brutalized in a home invasion. A bit of Hollywood trivia: Freak #1, as he’s credited, is played by a very young Jeff Goldblum, and funnyman Christopher Guest cameos in the film as a cop. The writer of the film, Garfield, was apparently no fan of the adaptation. 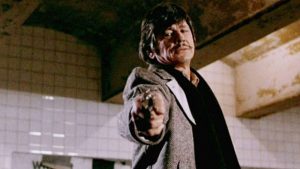 Kersey feels helpless in the face of this random act of violence, so he goes walking at night in his Riverside neighbourhood with a sock full of rolls of quarters. He smashes one mugger in the face, but it gives him the shakes. This is no fury-driven avenger. On a work trip to Tucson he gets friendly with a gun-totin’ fella named Aimes Jainchill played by Stuart Margolin, a full-on cowboy stereotype. He aims to educate this bleeding-heart liberal on the freedom of “filling your hand.” Aimes gifts him with a .32 pistol, and subsequently Paul goes on a rampage of thug-killing in the Big Apple.

That’s when a police detective played by Vincent Gardenia take an interest, as well as a host of national media—magazines like Harpers and Newsweek and something called Tempo, which looks a lot  like Time.

I know this was considered the low-rent cousin to the might-makes-right elements of, say, Dirty Harry. But it’s worth seeing, if only for a snapshot of the era, elucidating the frustrations of middle-aged white guys, pissed off at the perceived lawlessness of the drug-loving, hippie youth and their ebbing power in society.

Somehow, the new version is a lot less appealing, and much more appalling. 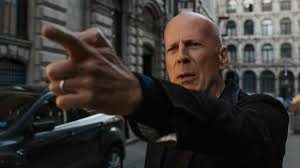 Eli Roth comes from a horror tradition, and so isn’t squeamish about gore, which I had no problem with. I also don’t mind action pictures or urban thrillers where some guy deals out his personal version of justice—that’s every second superhero movie.

But the fact that those middle-aged white guys still feel disenfranchised by their life circumstances is a lot harder to understand in 2018 than it was back in the 70s when the state of government corruption and an energy crisis put everyone in a foul mood. I suppose the US government is no less corrupt now, but we’re all living in a different world. Some Trump fans might not have woken up to that fact just yet.  There are even a couple of grumbly cracks in this movie about the internet and technology. Yawn. That there’s even a market for this kind of a film is a bit of a surprise, though maybe not much of one given this film’s modest box office so far.

Here Paul Kersey (Bruce Willis, delivering even more of a stone-faced performance than Bronson) is a surgeon in a Chicago hospital whose wife (Elizabeth Shue) and daughter (Camila Morrone) are brutalized in a robbery. Interesting that there’s no sexual violence this time, but it’s still nasty. Kersey visits his father-in-law who uses a rifle to scare poachers off his land. His “you gotta be a man and do it yourself” ethos inspires Paul to confiscate the glock belonging to a gang banger who stops by his ER. 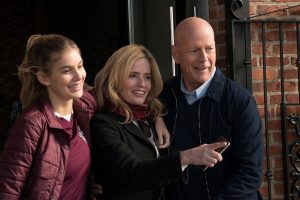 Paul then starts wandering the Chicago streets, looking for those he thinks are guilty and putting bullets in them, with the hope of eventually getting some justice for his family. And wouldn’t you know it, he starts to find those guilty men, just as detectives Dean Morris and Kimberly Elise take an interest in his vigilantism. For some reason Paul has a brother here, played by Vincent D’Onofrio, who could’ve been cut out of the movie without impacting its plot whatsoever. Would’ve saved a good 15 minutes of pointless screen-time.

It’s no surprise that the politics are very much to the right, as the film substitutes commercial talk radio for magazines to discuss whether this white  dude (at one point Willis is described as 30-something, ha) walking into neighbourhoods and shooting people is a good or bad thing. Roth tries to rustle up a little humour with the outrageous ads for the “sporting goods” store Jolly Roger where Paul looks into buying a gun, and its helpful salesperson (Kirby Bliss Blanton), but this isn’t anywhere near satire, if that’s even what Roth intends. At its worst it just feels like NRA propaganda. I enjoyed the aerial footage of the city, and the way Roth shoots the action scenes, but this otherwise feels mighty generic. 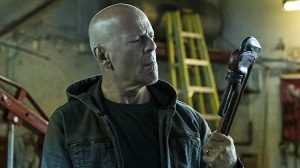 Rumour has it Death Wish was pushed from its original November 2017 release date because of the Las Vegas shootings, only to land in March, a few weeks after the Parkland, Florida shootings. It’s hard to imagine a film less in tune with the zeitgeist right now.