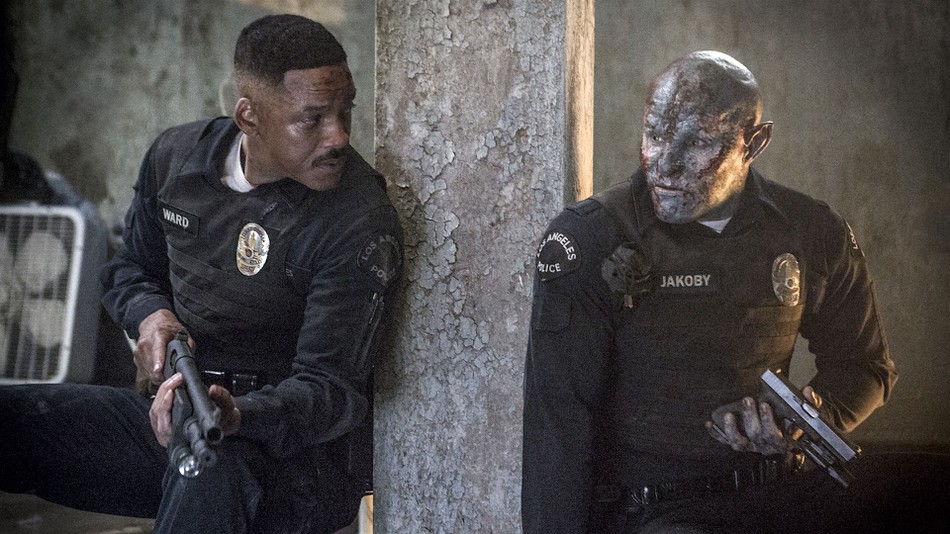 Here is a cross-section of a number of mildly-to-firmly recommended films now available on Canadian Netflix. (You can click on the movie titles to read my original reviews where I’ve written them in the past.)

Director David Ayers and screenwriter Max Landis. What a pair. They’ve got to be the most divisive creative team in Hollywood since Paul Verhoeven and Joe Eszterhas, if social media bile is any measure. I was no fan of either of these guys’ last projects—Suicide Squad and Victor Frankenstein, respectively—but they do have more interesting, more successful pictures further back, like Fury and American Ultra. Bright is a perverse genre mash-up, a bloody, R-rated ’90s cop action movie spliced with a Tolkien-esque fantasy, but it really works.

I’m as surprised as you are.

In this alternative Los Angeles, orcs, elves, dragons, and fairies are actual presences in the day-to-day fabric of the city. The magical creatures are as subject to bigotry as any minority, a subtext laid on pretty thickly, but so is everything else—not much subtlety going on in this picture. Officer Ward (Will Smith) is saddled with an orc, Nick Jacoby (Joel Edgerton) as a partner, the police department is corrupt, and groups of Rodeo Drive-shopping elves and gang-banging orcs are squaring off in advance of a prophesy that suggests a dark lord is returning to earth to lay waste.

It’s a good 45 minutes of backstory groundwork that needs to be laid before we meet our main antagonist—Noomi Rapace as a power-mad elf with a magic wand everyone wants—and too often the rules of this world are a little confusing. An early plot point involving internal affairs is pointless and then abandoned, and the whole enchalada would benefit from maybe not taking itself so seriously—there’s plenty of opportunity for a little levity in this material that Ayers and Landis refuse to capitalize on.

But as an action movie, they barely put a foot wrong. The set-pieces are high-end and high-impact, with Smith and Edgerton surprising as a mismatched team who spend a long night getting their heads handed to them, repeatedly. This would be a lot of fun on the big screen.

Ry Russo-Young’s film plays an interesting game with its audience. It sets up lovely, rich teen Samantha (Zoey Deutch) and her three lovely friends (Halston Sage, Cynthy Wu, and Medalion Rahimi) as the Heathers of their high school scene. (I didn’t confirm this, but it sure looks like it was shot in the beautiful province of British Columbia.)

For the first 20 minutes we keep hoping Samantha will turn out to be our Veronica—to continue the Heathers parallel—but she and her friends continually behave like the “privileged bitches” an unhappy classmate tags them as. After a Cupid Day party (what, no one calls it Valentine’s any more?) the four girls flip their SUV.

Smash-cut back to earlier the same day, and instead of Heathers, we’re in a wall-to-wall soundtracked teen Groundhog Day, with Samantha learning the hard way that bad behaviour has consequences, and that high school is, for some people, the worst time of their lives not the best. The game is whether we can manage to muster empathy for Samantha or her friends, and for awhile it’s touch-and-go, but as we go along a few unexpected turns in the script (by Maria Maggenti from a novel by Lauren Oliver) helps get us on board, as well as quality in the performances—support includes Logan Miller and the always reliable and consistently undervalued Jennifer Beals. The over-sweet heart of the story, that kindness is necessary or you’ll repeat your mistakes, is sledgehammered, but I’ve certainly seen worse, and less stylish, movies about and for teens.

Somehow there’s this Amy Heckerling romcom that came out a little over a decade back that I never saw—which maybe isn’t entirely surprising since a lot doesn’t get released in this part of the world. But how is it I’ve never even heard of this thing, especially with this cast?

Then I watch the first 10 minutes and start to figure it out. Heckerling’s big hit was Clueless and this feels like it’s still stuck in the 1990s—wall-to-wall songs by The Cure and forgotten ’90s pop (White Town, inevitably) and garish, sit-com lighting are total giveaways. And then the movie expects us to believe Michelle Pfeiffer would ever have had something to do with Jon Lovitz. In what universe would that ever have happened?

Pfeiffer is 40-something Rosie, divorced (from Lovitz), and a show-runner on a terrible teen TV show called You Go Girl. She’s raising an 11-year-old girl, Izzy (Saoirse Ronan, preternatural even as a kid) with a house and minivan a lot less impressive than you’d expect for someone running a TV show… but she’s gotta seem approachable, right? The tone is so terminally candy-coated it’s hard to feel anything for anyone. There are no stakes. And Tracy Ullman playing the personification of Mother Nature is a bad idea all around.

But hold up a second:

We get to watch the eternally awesome Michelle Pfeiffer and the Irish Streep Ronan as a child hang with Paul Rudd, who plays Rosie’s much younger love interest with a lot of enthusiasm—cue the heavy-handed Hollywood aging angst—and Fred Willard, Graham Norton, and Wallace Shawn all in support. There’s a good movie inside this picture that never quite gets out, but you can’t argue with this cast.

Ghost In The Shell

There’s quite a meal available right now  on streaming services if you dig cyberpunk, Blade Runner-esque science fiction. On Netflix I’ve just started watching Altered Carbon, but since I generally don’t review serialized shows on this blog I’m not gonna say much about it ( …but so far so good). On Amazon is an anthology series called Philip K. Dick’s Electric Dreams. And coming soon to Netflix is Mute, from Duncan Jones.

I will say if your appetite swings to stylish action and sci-fi, Ghost In The Shell may appeal. It’s not great, by any stretch, and I think it took a hit at the box office because of outrage around its casting: it’s based on the popular Japanese manga and anime series while star Scarlett Johansson is clearly not an Asian performer. I see the argument and the frustration, but I also think based purely on aesthetics and physicality, Johansson is great in the role.

Johansson does what she does best—kick the crap out of dudes and shoot enormous guns—and the out-of-this-world visuals are impressive. Plot-wise, the film isn’t hugely original.

I hope by now you’ve taken in Guillermo del Toro’s delightful The Shape Of Water, and if you liked it you may want to give his last film, Crimson Peak, a try.  It’s an old-fashioned period romance with ghosts, less the horror the trailers might make you believe. It’s impeccably designed and photographed, all in Toronto, which is a little hard to believe when you look at the film.

The house sinking into red earth is really something, and the picture has a real feminine quality to it that a lot of genre movies miss. I wished the script had more surprises, but I still recommend it.

Doing some research on Queer Cinema for a recent episode of LENS ME YOUR EARS  I did a genre search for LGBTQ films on Netflix, and was amazed to find so many indie dramas and comedies I’d never heard of.  This one was written and directed by Justin Kelly, based on the story of Michael Glatze, an American gay activist who renounced his lifestyle and became an anti-gay pastor. It stars James Franco and Zachary Quinto. It’s not a great film—so few biopics really are—but it is interesting in you don’t know the story, largely due to Franco and Quinto’s intensity.

The picture has a lot of sympathy for Glatze, despite his anger and refutation of a cause he used to champion. It has a connection to Halifax since Glatze’s partner, called Bennett in the film and played by Quinto, is an architect who moved from San Francisco to Nova Scotia, and many of the events take place here. Justin Kelly isn’t too concerned with orienting us—he clearly didn’t shoot in Halifax—and at other times it’s unclear where events are actually happening.

The architect in RL, Benjie Nycum, didn’t particularly like the script he was sent to this story, which is likely why his name is changed in the film. In response he decided to shoot a documentary and connect with his former lover, Glatze. It’s about 20 minutes long and called Michael Lost And Found, and it’s also on Netflix. It’s worth watching after the film to provide a little more nuance to the story.