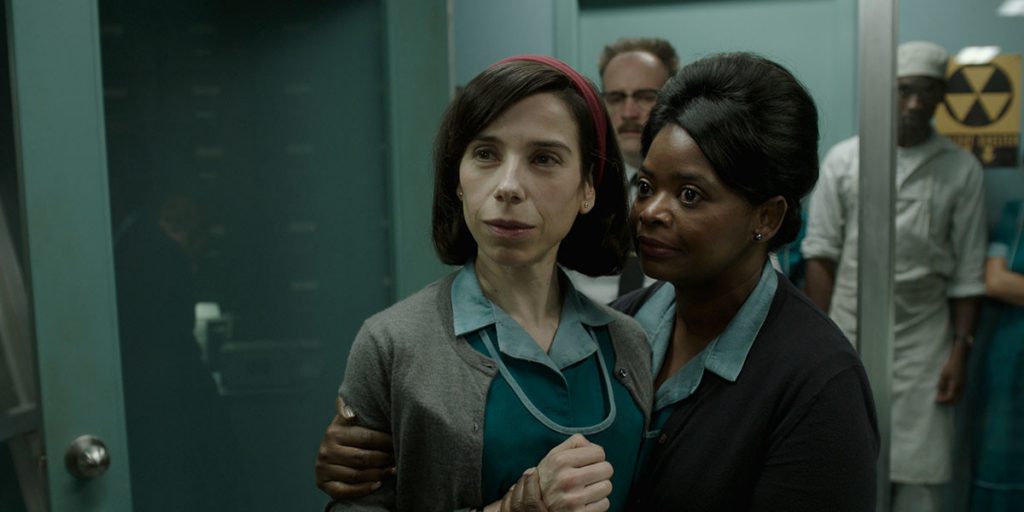 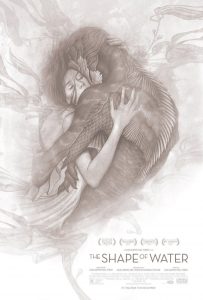 I’ve heard two jokey descriptors for this picture, that it’s a gothic remake of Ron Howard’s Splash, and that it’s a Hellboy prequel, focussing on the origins of Abe Sapien. Both takes feel a lot more true than expected, but that it makes me feel better about del Toro not directing a Hellboy 3 really surprises me. If this is the level of artistry we can expect away from his franchise blockbusters, I won’t miss them.

The Shape Of Water feels like a rising and advancing of the filmmaker, a new level achieved for the Mexican auteur who loves to shoot in Canada. It may be his best film yet, an adult fairy tale built on a number of classic Hollywood tropes, everything from The Beauty And The Beast to The Little Colonel to The Creature From The Black Lagoon, while placing key characters in a living space directly above a movie cinema says a lot about the movie-movie world this is. More a romance than gothic horror, del Toro’s comfort with genre elements allows him to expand and push against and beyond what’s expected. 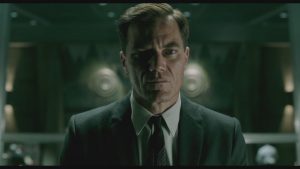 1962 Baltimore (actually Toronto and Hamilton, but only the locals from all three cities will be able to tell): Sally Hawkins burns bright (while unable to speak) as Elisa Esposito, a cleaner at a high-security Cold War government installation. What they do there is a bit of a mystery, but it has the air of a James Bond villain base, right down to punch-card machines by Stromberg—the name of the baddie from The Spy Who Loved Me who imagined a perfect society under the ocean. (Tell me that wasn’t on purpose.)

One thing they have going on is the incarceration of a merman (Doug Jones, who was also Abe Sapien and recently Saru in Star Trek: Discovery), hooked in some South American river by Strickland (Michael Shannon, utterly menacing), and examined by a scientist named Hoffstetler (Michael Stuhlbarg, having a career year).  Esposito gets up close and personal with the fish-man, hatching a plan to break him out with the help of her neighbour, Giles (Richard Jenkins), and, unwittingly at first, her coworker, Zelda (Octavia Spencer). 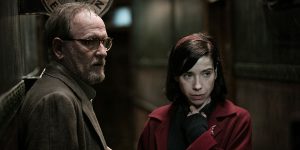 The character motivations here are wonderfully well-defined. Everyone is an outsider or misfit in their own way—alienated from their partners, their work, their superiors, or by their disability or their sexuality in a conservative society that only accepts the normies. Even Strickland—angry, rigid, and desperate to be modern and effective—buys a brand new teal Cadillac. It’s enormous, and though he gets some approbation for it, the road-yacht with fins doesn’t get him very far. 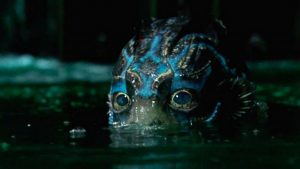 The Shape Of Water is creepier, sexier, funnier, and a lot bloodier than you think it’s going to be, crossing back and forth from sweet fable to frightening horror and back again. I loved all of it, and the feeling that even setting the film in the early ’60s, the tension between the present day and the sweet, romantic reminders of the past haunt/comfort the characters like ghosts, from the many films that show up on screens to lovely moments of dance. What is romance other than faith a spirit will find resurrection in today’s love, though music or movement or art or simple companionship? 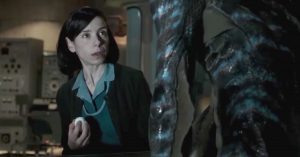 Some find del Toro too self-conscious in his deeply art-directed work—Crimson Peak production design was breathtaking, but its heart couldn’t break free, maybe as a direct result. Del Toro’s more mature, more present approach here makes this a better film, even while he regularly reminds you you’re watching a movie. It’s not perfect—I was unconvinced Giles character deserved the screen time he gets, especially his professional-life subplot, and I wondered how Esposito managed so much undisturbed time alone with the fish guy. But this is bycatch. The Shape of Water is a fully realized romantic epic, full of genuinely cinematic moments. Elegant and unmissable.