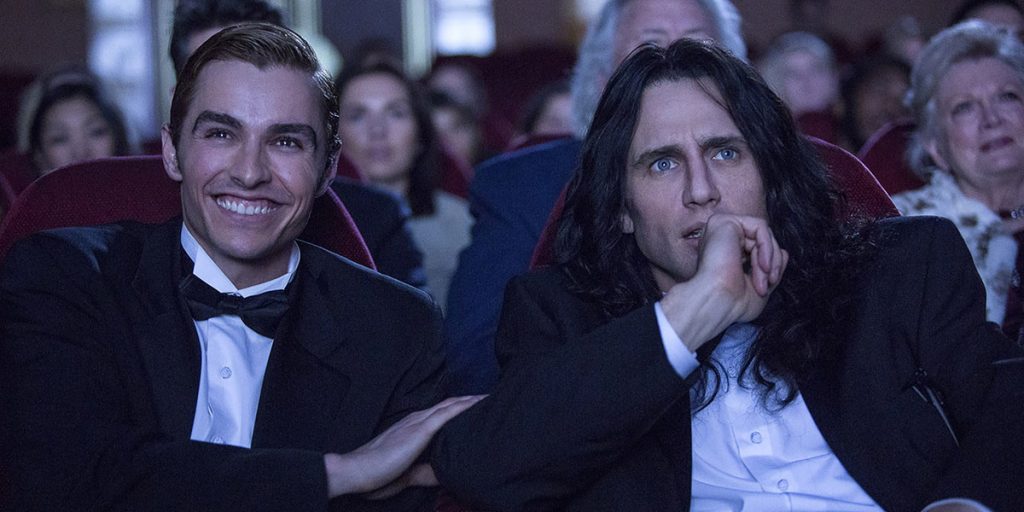 The Room | Written and Directed by Tommy Wiseau | 99 min :: The Disaster Artist | Directed by James Franco | Written by Scott Neustadter and Michael H. Weber, based on the book by Greg Sestero and Tom Bissell | 103 min 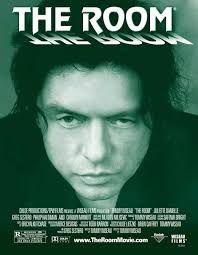 I was only initiated into the cult of The Room recently, but the experience was a great help to get prepared for the James Franco project arriving this week with a lot of buzz for the actor/director.

For those who haven’t seen it, The Room is an independent drama from self-styled auteur Tommy Wiseau—he wrote, directed, starred, and produced the film. With little to no experience as a filmmaker, he self-financed the thing and somehow managed to put together a semi-coherent feature. That’s an achievement, without a doubt.

It looks and sounds like ’80s soft porn—I was reminded of the Red Shoe Diaries—it has massive plot problems, terrible performances, and is miserably misogynistic.

In the lead role of Johnny, Wiseau depicts himself as the nicest guy in the world who is betrayed by his fiancé, who cheats on him with his best friend, leading to a jaw-dropping martyr’s conclusion. It’s the kind of vanity project even Vincent Gallo couldn’t dream up. It’s also frequently, unintentionally, hilarious, largely due to those liabilities I mentioned above. Wiseau himself is the picture’s biggest problem… or most prominent asset, depending on your perspective: he’s got a peculiar, Eastern European accent, his line readings of his own script are all over the place, and he’s about as appealing a romantic leading man as Lemmy from Motorhead.

Despite The Room having died a much deserved box office death back in 2003, in the years since it’s become a midnight movie cult, complete with the kinds of participatory audience events that used to be reserved for The Rocky Horror Picture Show. 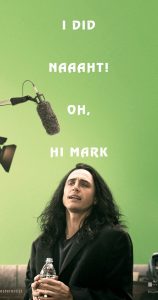 Cue this James Franco project, adapting the Sestero book. Sestero is Wiseau’s chum and co-star in The Room. The Disaster Artist explains how he (here played by Franco sibling, Dave) and Wiseau (James Franco) met in San Francisco, both struggling actors with big dreams. Sestero is awkward and inhibited, while Wiseau is fearless and loud, dominating acting classes with his volume and scenery chewing, if not his chops. Together, they head to Los Angeles to stay at Wiseau’s pied a terre. Wiseau’s mysterious, endless financial resources allows them to consider producing their own film when doors in Hollywood get slammed in their faces, hence The Room. 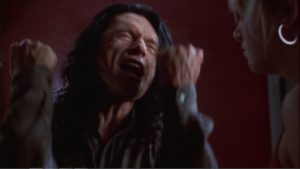 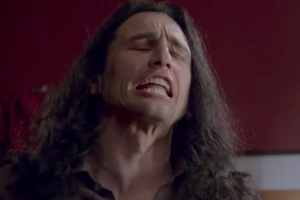 Franco does a terrific Wiseau impression in his enunciation and attitude—though he has to disguise some of his matinee idol looks for the role behind the mane of black hair and wrap-around sunglasses. (Franco is a performer who once played James Dean, let’s not forget.)

The film is so light and frothy and full of enthusiasm it’s easy to get carried away by how much fun (and funny) it is. Franco’s affection for his subjects and their big dreams is infectious, and he finds plenty who share that perspective. He opens his film with the fan testimonies of a passel of Hollywood celebs and finds roles for prominent chums Alison Brie, Seth Rogen, Zac Efron, Josh Hutcherson, Sharon Stone, and Jacki Weaver. It’s hard to know what people who haven’t seen The Room will make of this loving tribute, but it may be a gateway drug.

It’s also hard not to compare this film to Tim Burton’s Ed Wood. Like Tim Burton’s never-better biopic of a much-reviled, much-loved filmmaker, the people behind The Disaster Artist are so much more talented and accomplished than their subject matter, but they see a kinship in the passion for the craft, the underlying theme that passion is more important than anything else. That said, The Disaster Artist is missing the pathos of Ed Wood due to the lack of Burton’s gothic touch and Martin Landau’s Oscar-winning turn as Bela Lugosi.

Franco knows that we shouldn’t ever expect to get to know anything real about Tommy Wiseau. Whatever his disposition as a filmmaker or actor, he’s figured out one thing that keeps people’s attention: Mystique.

The Disaster Artist opens in Halifax on Friday, December 8.