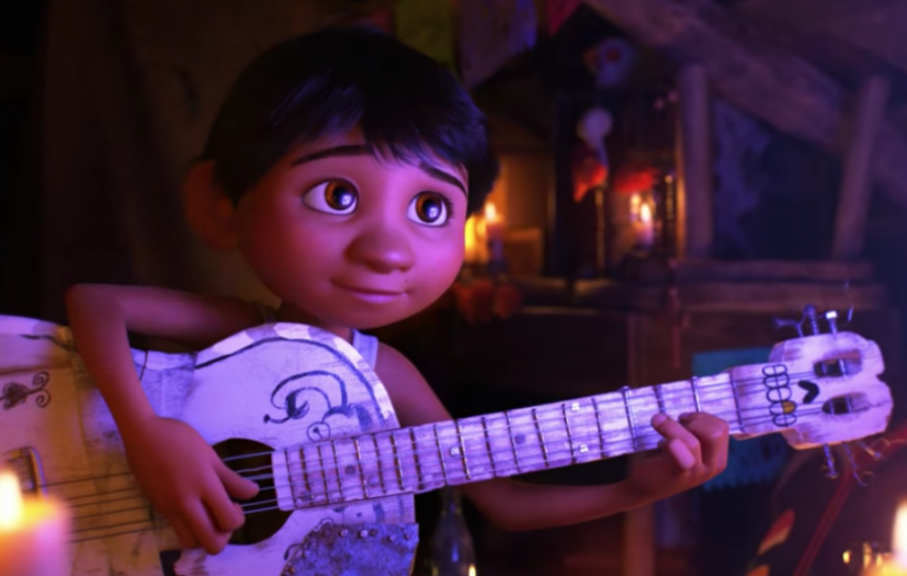 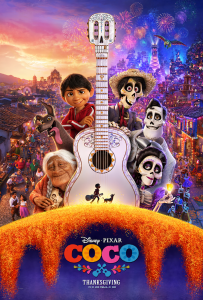 If it hasn’t happened already, someone should be writing a thesis about Pixar’s diamond-hard, perfectly paced storytelling. I’m not talking about the animated cars, the bugs’ lives, or even the monsters. I’m talking about the toys, the post-apocalyptic robots, the big-dreaming rodents, and the anthropomorphic feelings. The Mexican kid who dreams about being a musician can comfortably join that latter group.

Miguel (voiced by Anthony Gonzalez) lives in the village of Santa Cecilia, where for generations his family of cobblers have eschewed music and the people who make it. That’s because Miguel’s great-great grandfather abandoned his great-great grandmother to be a travelling mariachi, and the resentment of the song has been handed down through the generations. But Miguel is different: he wants to be a musician if only his family would allow it, and support him. He also sees an old photo, and pieces together that his hero, music legend Ernesto de la Cruz (voiced by Benjamin Bratt), was the man who abandoned the family so many years ago. 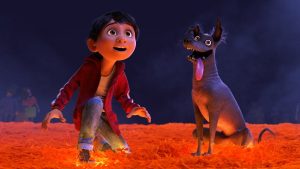 On El Día de Muertos, Miguel has a chance to enter a talent competition, but his family wants him to stick around the house and celebrate the time when the ghosts of their ancestors can come visit. That’s not how this is going to go. With the help of a little magic, that night Miguel crosses over into the spectacular land of the dead. He stumbles upon a few of his ancestors, a roguish guide (voiced by Gael Garcia Bernal) desperate to visit his living relatives, and the still-adored spirit of Ernesto.

As I mentioned, it’s the astonishingly tight script that wows out of the gate—would that certain recent blockbusters managed this impressive narrative lockstep—propelling us into a wild but comforting vision of the afterlife, a glorious, ultraviolet city of music and laughter peopled by hosts of dancing skeletons riding on cable cars, filling enormous theatrical events and having a good time. Even Frida Kahlo makes an appearance. The themes are typically Disney—family über alles—which can get a little tiresome in its eternal reductiveness, but it’s easy to forgive when the package this moral comes in is so packed with delights. The film’s also about the importance of creativity, of recognizing and honouring our elders and heritage, the persistence of memory, and about paying tribute to the mysticism of everyday life, particularly important when music is part of that magic. It also feels culturally sensitive, from this lay perspective, anyway. 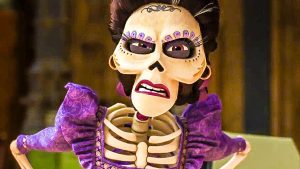 It should go without saying on a Pixar film that the computer-generated visuals are the industry standard, but even then I was astonished by the photo-realistic close-ups. The colours and characters are all vivid, with Miguel’s various relatives bringing a lot of joy. It goes beyond that: The design of the land of the dead is the coolest thing I’ve seen since Beetlejuice. You could spend the whole time looking for all the creative ways they work a skull motif into the backgrounds. And there’s no small influence of Miyazaki in the various spirit animals, especially an enormous, winged griffin. That Coco is worthy of a direct antecedent, Spirited Away, is the highest compliment I can give. 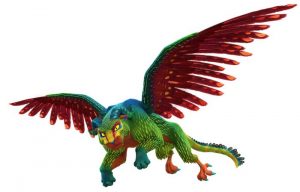