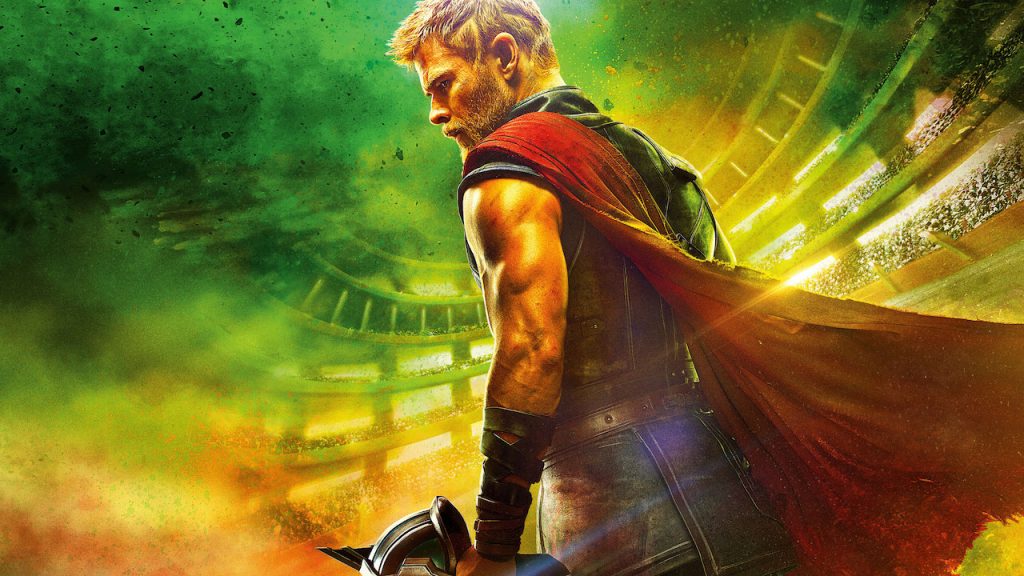 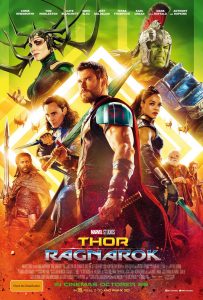 It’s the third Thor movie. Can you believe it? If I could go back in time and tell 10-year-old Carsten we’d have three Thor movies by 2017, not to mention all the Iron Man, Avengers, and X-Men movies, my kid-self would’ve plotzed. Especially given how much fun they tend to be—I’ve come to expect a certain standard of fantasy entertainment from these Marvel movies, and Thor: Ragnarok doesn’t disappoint. Taking its cue from the Guardians of the Galaxy pictures it’s light, more or less a comedy-action-Norse-myth-alien-superhero movie. Not all the gags work, but the quirk that New Zealand indie filmmaker Waititi (Hunt For The Wilderpeople) brings to the project distinguishes it in lively, unexpected ways.

We find Thor (Chris Hemsworth, whose comedic chops were established in last year’s Ghostbusters remake) trapped by the giant fire demon, Surtur (voiced by Clancy Brown), in a cavern of CGI sludge—once again, 3D makes this film look dark and cheap, despite the colourful, psychedelic production design. Watch a 2D version if you can. 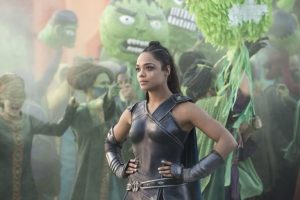 Solving the issue of the demonic adversary, he returns to Asgard to find his father, Odin (Anthony Hopkins), amusing himself with theatre—and a couple of hilarious cameos. (I see you there Sam Neill!) If you’ve been paying attention, you know this isn’t Odin, it’s Thor’s brother, Loki (Tom Hiddleston, who seems a little bored to be back in the horned helmet). 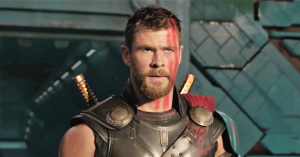 But Loki isn’t the real problem, it’s the brothers’ hitherto unknown sister, Hela (Cate Blanchett having tons of fun). She’s the goddess of death, with a major beef against Asgard, carrying with her the memories and pride of its colonial past and wanting a swift return to that kind of empire building. In her first encounter with Thor and Loki, she destroys Thor’s hammer, and her brothers end up on a planet run by the Grandmaster (a none more Goldblum-esque Jeff Goldblum), who gets his jollies by staging gladiatorial battles. He has Thor fight his favourite champion, The Hulk (Mark Ruffalo, who, when reverted to Bruce Banner, seems a little adrift in this material). Also in play is the Valkyrie (Tessa Thompson), an expatriot Asgardian who likes to drink. Meanwhile, Hela and her new right hand man, Skurge (Karl Urban), wreak havoc back in Asgard, and gatekeeper Heimdall (Idris Elba) works to save Asgardian civilians. All this, and a little room for Dr Strange (Benedict Cumberbatch), too.

Waititi fills the frame with colour and action, never lingering too long in any one place, which is probably for the best. That way we never need concern ourselves with the plot’s essential flimsiness. I mean, it’s great to have Jeff Goldblum in a Marvel movie, but it would also be good to have him actually do something. There’s really only one fight in the Grandmaster’s arena, which feels like a bit of a waste—there may be a Marvel sports movie hiding here.  When Banner realizes he’s been trapped in the Hulk for years, it could’ve been a powerful moment in his ongoing arc, as might’ve been his decision to return to his big, green monstrous form later on, but Thor: Ragnarok doesn’t allow for much emotion beyond consistent amusement. 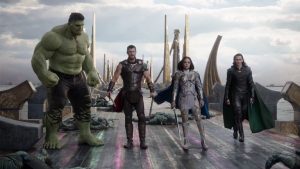 But maybe that’s OK. We know the next Avengers movie, Infinity War, is coming in mid-2018, and it’s going to be a heavy one, with world-destroyer Thanos expected to be the villain. This lighter take on the Marvel mythos is more than entertaining—packed full of Aussie and Kiwi accents in the supporting cast just seems to loosen everything up—and I, for one, welcome the repeated use of Led Zeppelin’s “The Immigrant Song” in key moments to bring home the Viking action. I would’ve even accepted AC/DC’s “Thunderstruck” during the champions’ bout, the crowd chanting “thunder” in support of Thor, but you can’t have everything.