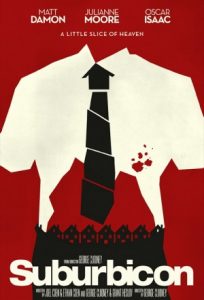 The prospect of directing a Coen Brothers script that’s been sitting in the drawer for awhile must’ve been just too tempting for Clooney. I get that. I also get the tastiness of this material on the page, somewhere between Blood Simple and Fargo, though without the existential brutality of the former or the character warmth and quirk of the latter. What is here is a cold slice of suburban noir. It grimly indulges irredeemable characters while managing tone — it’s interesting, but not entirely successful.

Suburbicon is one of those planned communities of the 1950s, a repressive white-flight paradise. When an African American family, the Mayers (Leith M Burke, Karimah Westbrook, and Tony Espinosa), move in, the deeply racist locals gets all up in arms about it makes their lives miserable, building fences and instituting around-the-clock noise.

Across the yard are the Lodges, Rose and Margaret (sisters both played by Julianne Moore), Gardner (Matt Damon), and son Nicky (Noah Jupe), whose perfect little world is confounded by a home invasion. The real reason for this disruption and violence is gradually revealed to Nicky, and Gardner starts to look a lot like William H. Macy’s Jerry Lundegaard from Fargo, a regular dude compounding his misery with bad decisions.

The big difference here is Damon’s Gardner hasn’t half of Jerry’s befuddled charm, nor does he talk funny. The film actually gives no real motivation for what Gardner does — he’s just a venal and incredibly short-sighted guy. Rose and Margaret are more appealing, but that’s mostly because Julianne Moore is incapable of being anything less. The whole production briefly shines when Oscar Isaac appears late in the running, but he’s just not in it enough. 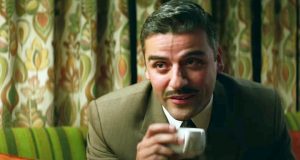 All this while the Mayers deal with an appallingly ugly side of America, and in that part of the story it’s easy to see what the film is trying to do: make the racial subtext textual, and channel that noirish moral turpitude of American film of the ’40s and ’50s into contemporary relevance. It reminds me a little of Steven Soderbergh’s The Good German, another film in love with the formal elements of a classic filmmaking style, but wanting to inject it with something closer to realism.

The problem here is the clash of what’s happening in one home — the crime drama style that the Coens have cleverly reanimated in much of their work — with the earnest, horrifying true-life race riot happening outside another next door. The thread connecting the two is the friendship between two children, but the film doesn’t commit to it being their story.

There’s talent, ambition, and craft, but the film can’t quite connect. As a director, Clooney has learned a lot from the Minnesotan masters, The Coen Brothers, but doesn’t quite reproduce their ineffable gift.