Directed by Kenneth Branagh | Written by Michael Green, from the novel by Agatha Christie | 114 min 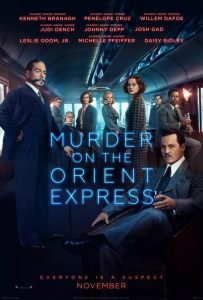 The Agatha Christie adaptation I grew up with was Death On The Nile. For some reason I’d seen that film three or four times as a kid, and Belgian detective Hercule Poirot is forever embodied in my heart by Peter Ustinov—not Albert Finney, who took the role in the 1974 Sidney Lumet version of Murder On The Orient Express, which is still unseen by me. Coming into Branagh’s film I was OK to not have the earlier film with which to compare, though I was expecting another one of Christie’s dense crime puzzles along with something a little special due to the presence of screenwriter Michael Green—he contributed to two of the year’s best blockbusters, Blade Runner 2049 and Logan.

The new take on Murder On The Orient Express is the epitome of easy Sunday evening entertainment, something you’d be entirely comfortable enjoying at home with your kids, parents, or grandparents. That doesn’t make it bad, necessarily, but it is safe and more than a little fusty. 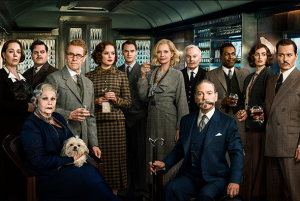 Branagh casts himself as Poirot, a decision that arguably defines the production as a peculiar vanity project. To be honest, it’s his massive, multi-pronged soup-catcher that upstages his performance and winds up being the centre of the action. It’s comical, and it helps establish a lightness of tone, but it sure is hard to ignore in the more serious moments. 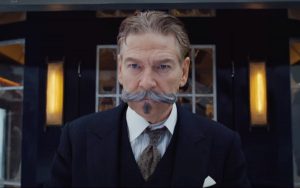 Poirot is also less the snob in this version. He’s compulsive and irritable, but he’s also asked to be a bit of an action hero, something that perhaps makes Branagh’s film comparable to the Guy Ritchie Sherlock pictures, starring Robert Downey Jr. They also had a fair bit of entertainment value and were slathered with CGI, just as this is. 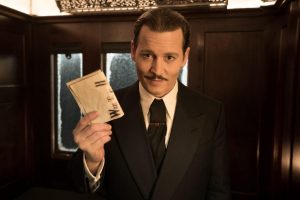 Arrayed around Poirot is a typically deep ensemble of performers of various experience and stripes. Johnny Depp has a few scars and some surface hissibility but doesn’t bring much depth to his role, Josh Gad is flat, and Olivia Coleman is wasted, while Judi Dench, Daisy Ridley, Willem Dafoe, and especially the resurgent Michelle Pfeiffer make the best of their slices of this big-screen pie. The story is much as you’d expect: Poirot is drawn into a murder investigation aboard the train from Istanbul while it’s stuck on a rail siding high in the mountains. Naturally, almost everyone aboard has good cause to off the victim, but who did it? 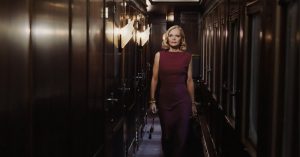 This is a story that unspools with a certain mid-tempo inevitability, and Branagh is happy to have his camera float around for no real reason other than to not let the walls of the train limit the visual production. The close spaces in a train stuck on a trestle might provide some welcome claustrophobia for a suspense thriller, but Branagh doesn’t see it that way. Green does reasonable work keeping all the character details straight, though this isn’t the film he’ll be remembered for. 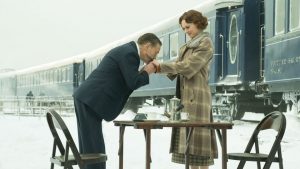 Most of all, that big, fake moustache gets all the attention. It even comes with its own evening wear.