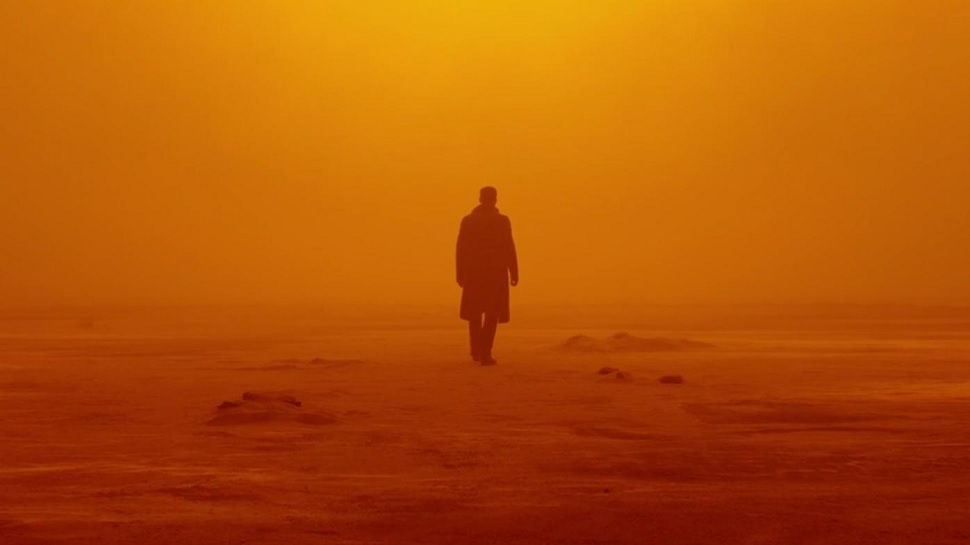 Directed by Denis Villeneuve | Written by Hampton Fancher and Michael Green, with characters from the Philip K. Dick novel, Do Androids Dream Of Electric Sheep | 163 min 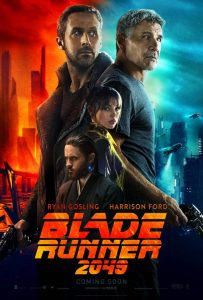 In its DNA, in its circuitry, any sequel looks back at the original. A good sequel moves forward more than it looks back, while that rare beast, a great sequel, uses the building blocks of the original to create something brand new, something you couldn’t have imagined going in no matter how familiar you are with its origins. This is firmly in that last category.

There is something poetic in what Villeneuve and his collaborators have accomplished here. We’ve almost reached the year the original Blade Runner imagined, 2019. (I revisited the film earlier in the week.) When it was made the setting was 37 years in the future. This sequel, this reimagining, looks forward to a world another 32 years from now, another alternate future. This is a real-time temporality providing a clever balance that helps justify this effort beyond filling the studio’s coffers, as does the artistry on display.

But the new film also feels like an epitaph to the 20th Century, to all the culture and achievement reduced to nothing as the world dies around us. This is the end of the line.

This isn’t a film that benefits much from a plot summation, so I’ll give you only the basics: It stars Ryan Gosling as K, a replicant law officer. In the dangerous days following the first Blade Runner much has changed. Replicants no longer have a limited lifespan. They fixed that problem. But K is still out there rounding up the earlier models, rogue replicants, long after the Tyrell Corporation has gone under, working for his cynical and demanding boss, Joshi (Robin Wright). K stumbles upon a clue from the past, which forms the detective story at the heart of the film. 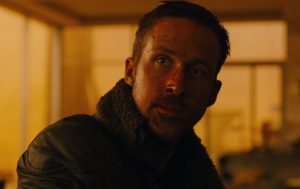 Villeneuve’s command of scale here is astonishing. As a pure audio-visual experience—cinematography by Roger Deakins, music by Benjamin Wallfisch and Hans Zimmer, with echoes of the original sound design and score of Vangelis—it’s operating on a whole other level. Cathedrals of percussive intensity frame wastelands of dust, metal-strewn beaches echo the ship graveyards of Bangladesh, the endless rain and snow on a city sprawling along an unrecognizable So-Cal coast, the risen seas held back by enormous dykes, all the way down to San Diego. Even the interiors are enormous and imposing, especially the headquarters of Niander Wallace (Jared Leto), a man who has stepped into the vacuum left by Tyrell and who now produces replicants en masse. 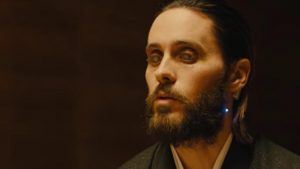 This is as much a post-apocalyptic film, post-environmental, as it is a science-fiction of ideas, which makes it even darker and quite a bit more hollow than the original picture. All sci-fi pictures have more to say about the day they were made than any prognostications of the future, and I’d argue armageddon feels more plausible and immediate right now than it did in 1982—whether via nuclear war or climate change. We’ve also had many more visions of the end of days in the past 35 years to build momentum, some more frightening and immediate than others: Blade Runner 2049 owes a thematic debt to Children of Men, Her, and Mad Max: Fury Road, from which it paraphrases a line about trees. Major credit to Villeneuve for building this huge machine and still managing a level of mystery about its world and characters, something the first film had in spades. 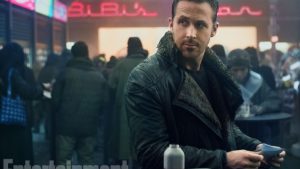 The tone also feels strangely similar to the second season of True Detective. Before you consider that a dig—that show’s second season was famously not well received—its visuals were utterly compelling while its characters were all haunted and empty, and it envisioned modern California as an operatic, hypnotic horror, a corrupt, poisoned land you’d never want to visit but were OK with gliding above, silently. 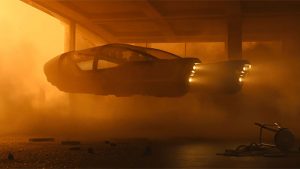 Major props to the special effects houses that worked on this film. They show us wonders we’ve never seen before, an impressive display of imagination. 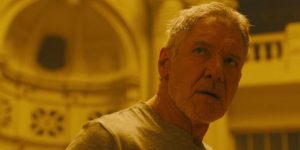 While wowed by its cinematic qualities, I’m not blind to the film’s issues: It is so beautiful in places, so concerned with world-building, in a few scenes it skates perilously close to becoming inert, the engine of its plot grinding way down below these incredible vistas, struggling to connect with its robotic characters’ humanity and hold our engagement over its extended running time. It’s almost entirely absent humour or quirk—we miss JF Sebastian and his toys. Gosling, for all his charisma, rarely evokes real feeling but for brief moments of anger and fear, while Leto’s Wallace is an empty suit, undeniably evil but less interesting than his predecessor, Tyrell, who seemed distant from his humanity but still recognizably human.

But Ford has become a wily master, providing a real heart and sadness to the story. The film around them also may not have come far enough in its gender politics: the women in 2049 have much more agency, but they’re not treated a whole lot better by men than they were the last time.

A few hours after having seen it, I don’t feel I have nearly the perspective to take it all in—enraptured by the astonishing beauty yet questioning the places where it feels like something’s missing, like a skull’s empty eyesocket. But there’ll be another screening, and this time not in 3D, which is totally pointless here. IMAX was invented for a film like this, and I want to spend more time in this grim but beautiful world, and that’s saying something for a picture more than two-and-a-half hours long.

As promised above, I went to see the film a second time, this time in IMAX (not 3D), and I have a second-screening hot take to share.

3D does NOTHING for this film, and IMAX does EVERYTHING.

I would strongly recommend you see the film in IMAX, or find a non-3D screening to enjoy. The IMAX made me realize how much 3D darkens and obscures the visuals. For a film like this it’s the kiss of death. In IMAX I was able to really appreciate both the scale and the finesse of Roger Deakins’ cinematography, and recognize many more fine visual details. For instance: the spinner was made by Peugeot—the French auto manufacturer finally breaking into the American market! 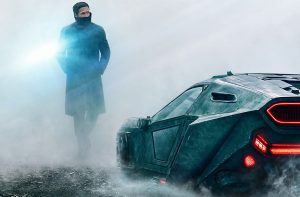 The second time around also brought home for me more nuances, subtleties in the storytelling, and made clearer the complex latticework of alternate history Villeneuve is playing with here.  And I may have been a little too quick to judge Gosling’s work. He sells the alienation and existential angst at the core of this story—how does he, an artificial life form, manifest as more human than human? And should he even try, given the cost? Gosling does a man’s job.

I also want to give credit to the key female cast aside from Robin Wright: Ana de Armas as Joi, Sylvia Hoeks as Luv, Carla Juri as Dr Ana Stelline, Hiam Abbass as Freysa, and Mackenzie Davis as Mariette. I wish they were more empowered as a group—the undeniable male gaze is pervasive here—but their characters are distinct and memorable.

That said, there’s also an argument to be made—and I’ll present it gently to avoid spoilers—that K’s “hero’s journey” is, in fact, to realize he isn’t special, that the women in the story hold the real power. It’s a realization that Deckard has already achieved. That subtext is to the film’s credit, an anti-narcissism, anti-chauvinism that helps redress the balance of power, and counters the accusations of sexism against the filmmakers if not the still patriarchal society depicted in the film.

And it’s a credit to the film I’ve been wrestling with these issues for days. I take back what I wrote before: There’s nothing missing here if the film has this kind of psychological staying power.

Finally, I stumbled upon these short films. Once you’ve seen Blade Runner 2049, these may help piece together some of that alternate history: