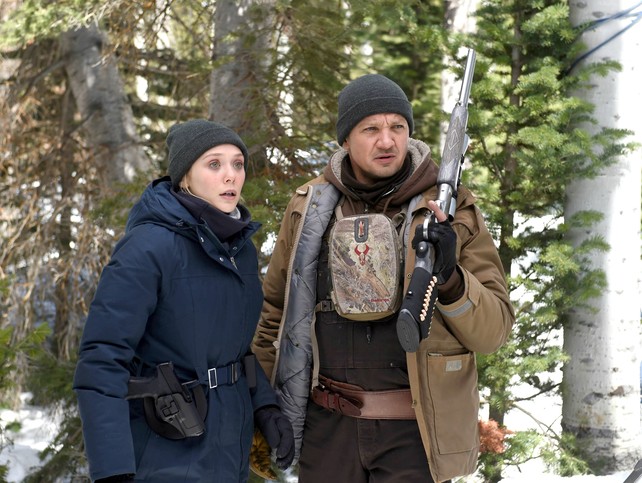 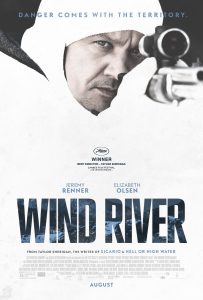 Sheridan has elevated his career from jobbing Hollywood actor to A-list auteur with Wind River. This is his first film as writer-director, and while it’s not quite to the standard of his last two screenplays directed by others—Sicario and Hell Or High Water—it’s a dark and  compelling procedural with surprising social justice overtones.

Cory Lambert (Jeremy Renner) is a Wyoming mountain man, a hunter and tracker, his family fractured by tragedy. When he finds a young Native American woman dead in the snow on the Wind River reservation, he becomes part of the subsequent investigation, with help from an FBI agent from out of town (Elizabeth Olsen) and the local law enforcement (Graham Greene). 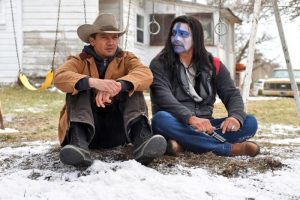 Sheridan doesn’t quite wow us as a filmmaker the way he does as a writer, though he isn’t afraid to take a few risks, including a single mid-movie flashback scene that any screenwriting guru would tell you is a bad idea. Though such a thing threatens to capsize the narrative flow, it works here in part thanks to the potent presence of the hardest working actor in showbiz right now, Jon Bernthal, and it lays out essential backstory for what immediately follows. It’s not a slam dunk, but by then we’re invested and willing to go down some unusual storytelling alleys.

While Sheridan also doesn’t allow for much reflection from a character who shoots someone—and every indication is that they never did that before—before swiftly moving the plot toward other concerns, conversations about jurisdiction, causes of death, and deep, unresolved pain are much realer and more emotionally intense than the occasional, sudden violence. An incidental nod to what must have been some Canadian location work, aside from Mr Greene, is the presence of rocker/actor Hugh Dillon in a small role. 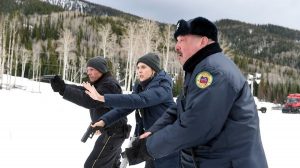 The picture succeeds in rooting us in this environment—with help from an evocative Nick Cave and Warren Ellis score—and a story with vividly drawn characters, their interlocking pasts revealed slowly. Sheridan likes his westerns and western-adjacent tropes, using genre as a trojan horse to provide an unblinking gaze at the dark side of American myth. Wind River comes from a male perspective, with a white hero in its centre, pointedly individualistic, so while the textured exploration of grief is laudable, you’d be forgiven for thinking this is just another right-leaning revenge drama with a topical subtext to help us white fellas feel better about ourselves. “We may not be able to protect our children and womenfolk from the bad guys, but we can avenge them,” it sometimes seems to be saying.

But I’ll throw Sheridan more credit than that. I can applaud the intent to shine a light on the deaths of indigenous women as the bedrock of this story. That ambition, beyond those other concerns, is what carries the day. 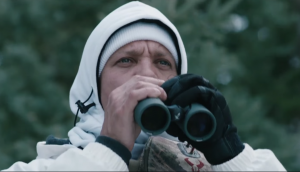