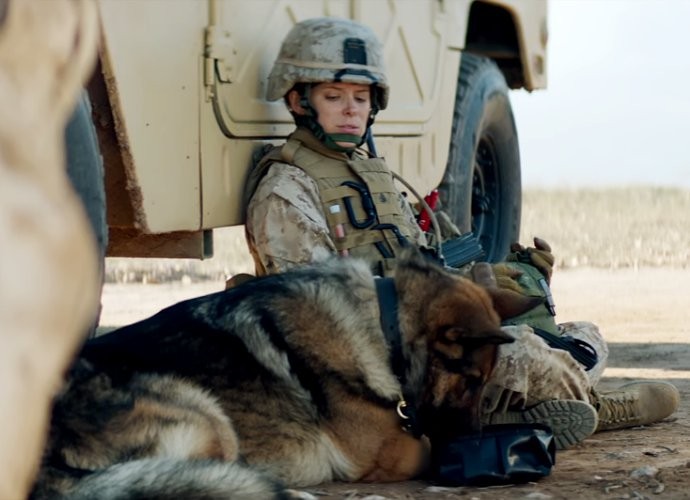 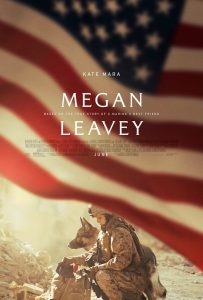 Megan Leavey is based on the true story of a US Marine and her bomb sniffing German Shepherd, both of whom were deployed to Iraq. In the documentary Blackfish  Cowperthwaite awoke the world to marine parks’ cruelty to cetaceans, so it makes a certain sense that her feature debut would hinge on the relationship between human and animal. More the shame, then, that much of the story is so by-the-numbers. 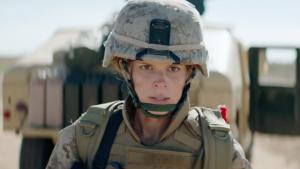 Leavey is played by Kate Mara. She’s deserved an above-the-title role for awhile and is solid without being flashy in earning our affections, but then flash is not what the film is about; Cowperthwaite and her screenwriters—including Bridesmaids‘ Mumolo—make sure every turn is conventional, every storytelling choice predictable. Yes, Leavey is a screw-up who finds in the Marines a cause, yes, she bonds with a troubled, bomb-sniffing animal, and yes, they go to Iraq and save many lives, eventually seeing armed combat and getting wounded in the bargain. But there’s a lot of detail missed out, too—the film doesn’t do much to show that the soldier and her dog went on hundreds of missions, something I learned after the fact. I would have guessed about a half-dozen. With plenty of opportunities for nerve-shredding suspense, none are capitalized on. 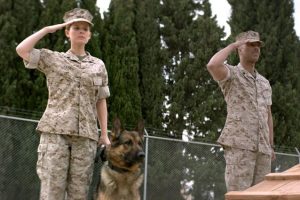 The second half of the film is concerned with Leavey’s post-war recovery, which pushes Mara to show real emotion, and attempts to adopt the dog, Sgt. Rex, who’s still in service. Her efforts to wrestle with the military bureaucracy doesn’t exactly make for riveting cinema. Ramon Rodriguez, Bradley Whitford, Edie Falco, Tom Felton, and Common offer some flavour in support, but no one really shines.

However,  those who’ve known the affection of the hounds will find things to enjoy about Megan Leavey. I count myself amongst them, and even while I was resolutely unmoved by most of the narrative changes, the gorgeous dogs won me over from the start, and the ending had me blubbing. This is about the love between a dog and his person. The film gets that much right.