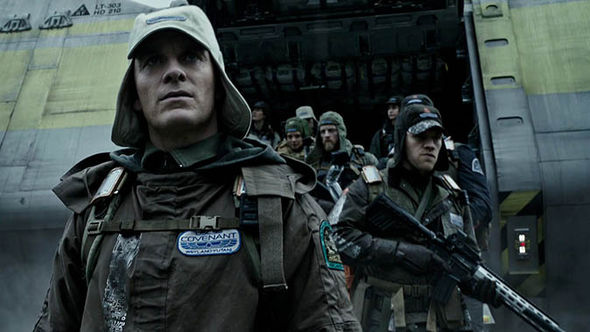 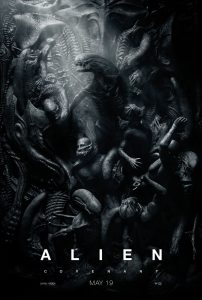 The Alien series, which bloodily thrust its way into existence in 1979 with Ridley Scott’s original, is very much its own genre—described narrowly as somewhere between a haunted house in space and a slasher movie in space—and rich enough to allow many thematic interpretations. It’s also a franchise adaptable enough to allow maverick filmmakers to make it their own after Scott exited the premises—James Cameron, David Fincher, Jean-Pierre Jeunet… and whoever it was that made those Alien vs Predator movies that we don’t speak of.

But Scott has come back to the material, first in 2012 with the much-derided Prometheus (though I liked it,  enough to write about it twice), and now here he is again, offering yet another take on the xenomorph chronicles. And while it’s almost scuppered in the early going by a fatal sense of deja vu, it delivers enough scares and gory shocks, along with Scott’s exquisite production sense, to make it worthwhile. 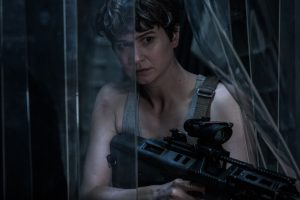 But that set-up is painfully prosaic: colonist ship the Covenant is on its way to a distant planet when its cryo-sleeping crew are awoken—a faint signal must be investigated. Sound familiar? Even though the crew are all coupled—including Katherine Waterston, Billy Crudup, James Franco, Danny McBride’, Demian Bechir, Carmen Ejogo, and Callie Hernandez—they don’t seem to prioritize their real mission over this detour. Well, all but Waterston, who essays the Ripley-esque role of the no-bullshit Daniels, the conscience and brains of the crew. Also amongst them is a synthetic, Walter (Michael Fassbender, the best thing in this), who is just like David, the android from the last movie, but for a slightly more Americanized accent. And, speaking of David, the crew drop down onto a beatific world and there find the remains of the “Engineer” ship piloted by David and Elizabeth Shaw (Noomi Rapace) in Prometheus. Of course, the deadly cargo they carried is actuated on this new world in many terrifying ways. Welcome the neomorphs. 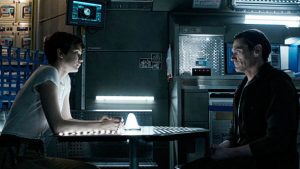 The production is as stunning as you’d expect in a Ridley Scott film. The man is one of Hollywood’s greatest visualists, though he’s not a writer and is only really as good as his scripts.  At times this feels like an expressionistic remake, with creepy critters and a step-by-step recreation of some of the best moments from his original film and its more action- and weapon-fetishistic sequel, Aliens. But those two films had vivid, interesting ensembles—aside from the characters played by the actors mentioned above, we find other, more disposable members of the Covenant’s human crew become insta-alien-fodder. We barely get to know them and therefore are neither moved nor surprised when they suffer from a violent hemorrhagic fever followed by rapid beastie gestation, fatal, unnatural birth or face- and throat-gnawing.

This may be the goriest of all the Alien movies, and that’s saying something, which at least distinguishes it. But about halfway in, I was beginning to wonder whether this version would be about as different from the earlier ones as the Ripley clone in Alien: Resurrection was from regular Ripley.

But then David reenters, and we get a strange shift in tone and pace. The film fragments, with characters splitting up—sometimes almost managing to be two places at once—and David and Walter get a chance to talk philosophy and poetry. The time spent with two androids gives this Alien movie a welcome flavour change, even as it channels the other Ridley Scott classic, Blade Runner, with a synthetic character repeating Roy Batty’s exclamation: “That’s the spirit!” 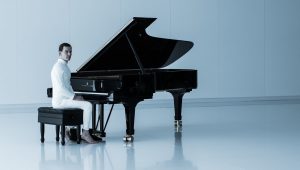 And, of course, we get that slippery xenomorph making life difficult, and brief, for most everyone.  Our diminished attention span is much catered to—those face-huggers beget chest-bursters who beget adult-sized critters in record time, and a final twist is the sort of thing anyone paying attention will see coming.

What we don’t get, and haven’t much gotten since those first two Alien movies, is any real social connection between those expendables. Does anyone remember how class was so essential to those stories? The space truckers versus the management or the military grunts versus the inexperienced officer and the corporate lackey?

I grouse about all the echoes, but taken as a whole, Alien: Covenant is a high-end monster movie made with care—especially in its look and score by Jed Kurzel, which cleverly incorporates echoes of Jerry Goldsmith’s original. Perhaps in cases like this it’s a little churlish to moan about all the things that seem overly familiar given that’s a good part of why we go to these movies:

We want our pants scared off. This should do the trick. 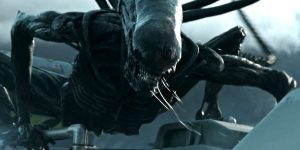