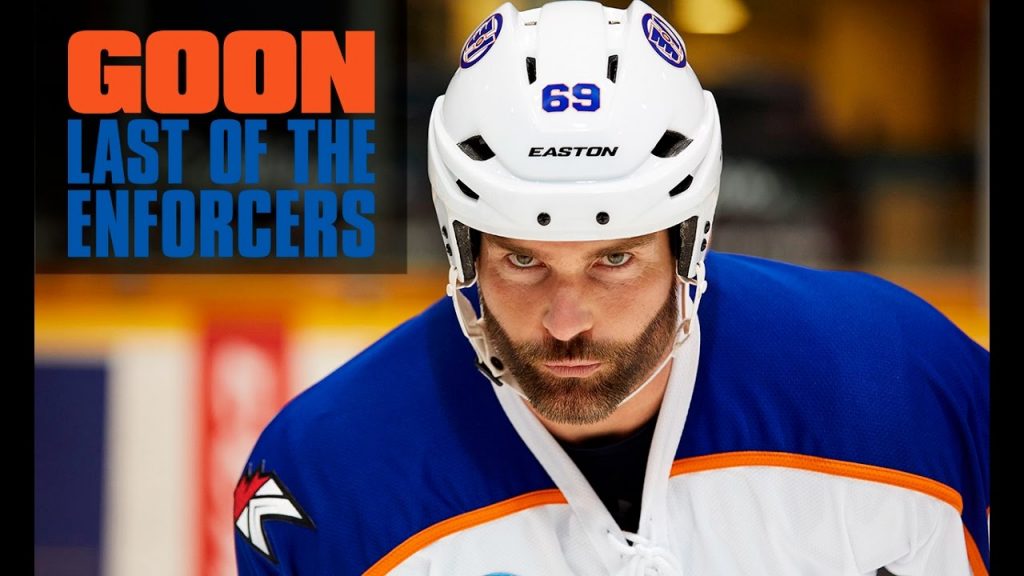 Directed by Jay Baruchel | Written by Baruchel and Jesse Chabot, based on the book Goon by Adam Frattasio and Douglas Smith | 101 min The first Goon was a violent and foul-mouthed hockey comedy with a surprisingly sweet hook and a solid central performance by Seann William Scott. Maybe my biggest grudge against it was that it was set in Halifax without actually being shot here, but that’s just the vagaries of the movie business in Canada, and nothing to do with the creatives. As Baruchel told me just the other day—when he was in the CBC studios for an interview—people don’t realize what a miracle it is that a movie gets made at all, even one like this with some genuine box office prospects.

Goon 2 has turned up its outrageousness, throwing every rude gag against the wall to see what sticks. I admire that, though it does feel a lot more slapdash than the first time out. The goon of the title, Doug Glatt (Scott), is still playing with the Halifax Highlanders minor league hockey club, but early on he gets beat badly in a fight with newcomer, Anders Cain (Wyatt Russell). It’s the first time he’s lost, and in the pummelling he hurts his arm badly. He’s got to quit hockey, and get a job in the straight world. Meanwhile, his wife Eva (Alison Pill) discovers she’s pregnant. Is it time for everyone to grow up?

Maybe, but the movie seems to think we’re also interested in exploring the dysfunctional relationship between Anders and his father, Hyrum (Callum Keith Rennie), the owner of the Highlanders. With Glatt gone, Dad brings his son onto the team and makes him captain, but in their scenes together the laughs die, and neither of them has a particular arc. You’d think there’d be some fun to be had with Glatt working in a filing room at an insurance company, but aside from Jason Jones as his boss, there’s not much here, either.

It’s too bad Doug’s brother, an interesting character in the first film, is absent here, and Eugene Levy as Doug’s father—making for an American Pie reunion in the first film—is also missed.

But things pick up later in the running, as Glatt’s efforts to return to the ice, learning how to hit with his left hand (with a big help from the MVP of these movies, Liev Schreiber, and his terrific Canadian accent) reestablishes the hero’s journey allowing the gags to hit a lot harder, too.

If anything, the Goon sequel feels more base than the first one, the humour more juvenile and obsessed with body functions. The director himself gets some of the most shameless, and depending on your disposition, offensive jokes. Or maybe funniest. I can appreciate the sheer commitment to this R-rated, heavily improvised gag-driven approach… to a point. Your own point totals may vary.