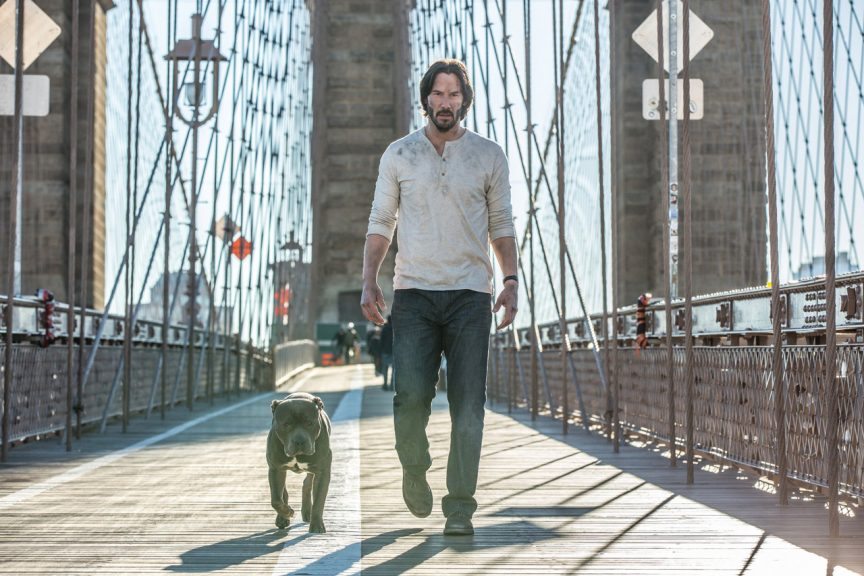 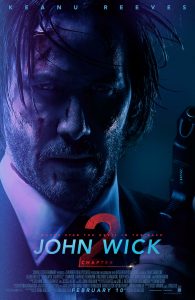 Keanu Reeves isn’t exactly graceful. For a movie that depends so much on his athleticism—and that of his stunt doubles—he has an odd, bowlegged gait and seems to struggle a little in the fight scenes. It’s actually kind of refreshing, his 50+ year-old body getting repeatedly pummelled  by younger, bigger guys. Somehow he still manages to plausibly kick the crap out of them. Well, he shoots them at point blank range, mostly.

Reeves as John Wick  was a hell of a surprise back in 2014. The film’s as pure a genre exercise as you’ll ever see, a startlingly violent  revenge thriller giving Reeves a career-reviving role. The original creative team is back with this sequel and bring back much of what worked the last time while slathering the violence in a richer production design, though some of the novelty of the concept has worn a little thin. 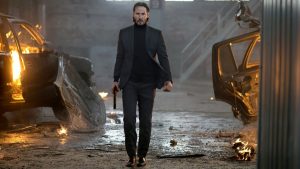 Encountering Wick just a little after the events of the first feature, we find him at a warehouse tracking down his missing Mustang. The car gets the worst of it, but typically Wick is nearly indestructible in the face of multitudes of gun-wielding thugs. Ready to go back into retirement, he never gets the chance—an old associate (Riccardo Scamarcio) shows up to call a mark. Wick tries to refuse, but you know there’s no getting out now. Wick is tasked to assassinate this man’s sister, a mob boss in Rome, but before long Wick is back in New York with a contract on his head, going toe-to-toe with every killer in the city.

One of the joys of the first film, and delved into a little deeper here, is the crime world Wick inhabits. It comes with its own currency, its own businesses, and its own rules. Especially appealing is The Continental, the hotel chain—it has a location in Rome—where no crime business must be done on the premises. It forces antagonists to shift from gun battle and martial arts to sharing a cocktail. 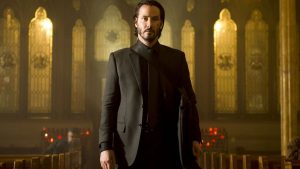 And there’s this great overlay of analog and digital worlds, from rooms filled with old typewriters to cellphone simcards tucked in pouches strapped to homing pigeons. God knows what it all means or how it works, but it’s an aesthetic delight, along with locations in Roman catacombs, the Lincoln Center subway tunnels, and a gallery show that looks like something out of The Lady From Shanghai.

Chapter 2 also introduces a little fresh vocabulary to the action movie: There’s the grab-one-assailant-by-the-throat-while-unloading-your-clip-into-the-heads-of-others, and the invention of bulletproof formalwear, a genuine advantage in a firefight. And we finally get to see John killing people with a pencil. But beyond that there’s also a certain sameness—the action choreography, while top notch, doesn’t show much we didn’t see in the first movie. It gets a little repetitive. And Reeves manages to be even less expressive than the first time around. 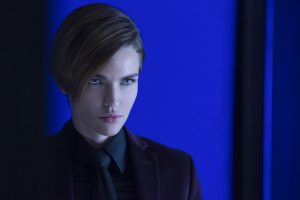