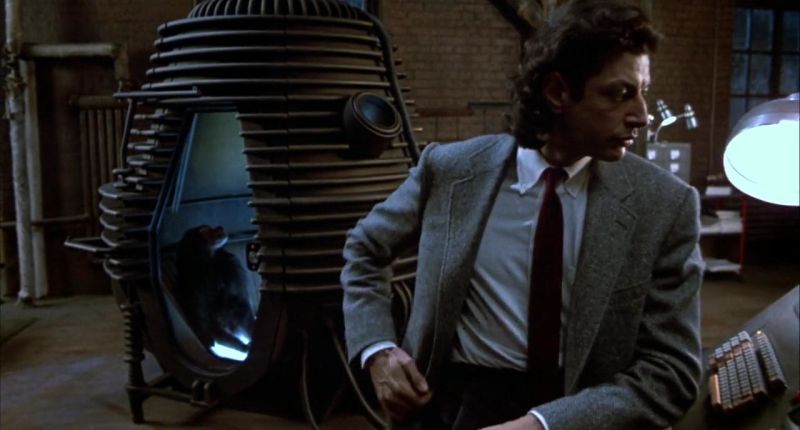 In an effort to keep you, good reader, up to date with films now available on online platforms, I had a look at the past few weeks of new releases on Canadian Netflix and I’ve got films to recommend. (You can click on the movie titles to read my original reviews where available.) It’s just a little past the 30th Anniversary of this horror classic from David Cronenberg, if those round numbers matter to you and you’re looking for an excuse to revisit or perhaps see it for the first time. The Fly is a Toronto-shot remake of the 1958 original—as discussed on the LENS ME YOUR EARS podcast about remakes—taking the original monster-movie concept of a man turning into a giant insect and slathering it with Cronenberg’s patented brand of body horror. It’s heavy with the fear of AIDS, something especially relevant in 1986 when the film was released. A rarely better Jeff Goldblum is Seth Brundle, a scientist who, while experimenting with his teleportation machine, makes a serious, terminal mistake. It’s also probably the most tragic love story in a horror movie since The Bride of Frankenstein. Big props to Geena Davis’ performance. The Wachowski sibs’ grand space opera, a story of an ordinary human being (Mila Kunis) who discovers she’s interstellar royalty with a canine-human protector (Channing Tatum).  The picture is full of wacky, half-baked ideas and Eddie Redmayne going big like you’ve never seen him before or since—and I’ll leave it with you whether that’s a good thing. Panned upon its original release, it might be primed for a The Fifth Element-style cult and rediscovery. Your light years may vary. Two Januarys ago this Clint Eastwood-directed feature, based on a true story, was all the rage, especially amongst Americans coming to grips with all the wasted years and wasted money spent in complicated wars in the Middle East. Bradley Cooper is terrific in the lead, and the scenes in Iraq deliver high-impact war-movie thrills, but the stuff back home is weak, complete with a hilariously obvious fake baby.

Back To The Future trilogy You might remember back in October 2015 we all enjoyed living through Back To The Future day, that time where Marty, Doc, and Jennifer travel to the future and discover hoverboards, terrible fashions, and future Biff, who goes back in time to stack the deck in his favour. I actually found the second and third instalments better than I’d remembered, but the original still stands as a popcorn classic and one of the best time travel movies ever. Daniel Radcliffe has impressed much more with his post-Potter career than he did as the boy wizard. He refuses to make safe choices, consistently showing up in interesting indie fare (The F Word, Swiss Army Man, Imperium) and steering clear of most obvious blockbusters—with maybe the recent exceptions of Now You See Me 2 and Victor Frankenstein. Horns is pointedly peculiar, a film messing in multiple genres. It doesn’t all work, but its midnight movie weirdness some are bound to find beguiling. Snowden was Oliver Stone’s 2016 biopic of the famed NSA whistleblower.  It seemed a perfect marriage of material, performers and filmmaker, but it’s nowhere near as gripping as this. This history-as-it-happens, a documentary channelling a spy thriller, the story of a man who couldn’t in all good conscience live with the crimes his government was asking him to commit.

Hunt For The Wilderpeople A gem from New Zealand filmmaker Taika Waititi,  a charmingly sweet story of a troubled foster kid who goes on an adventure with his uncle Hec, chased by the authorities through the wilderness. It’s equal parts hilarious and thrilling and touching, an original that’s somehow manages to feel strangely familiar.