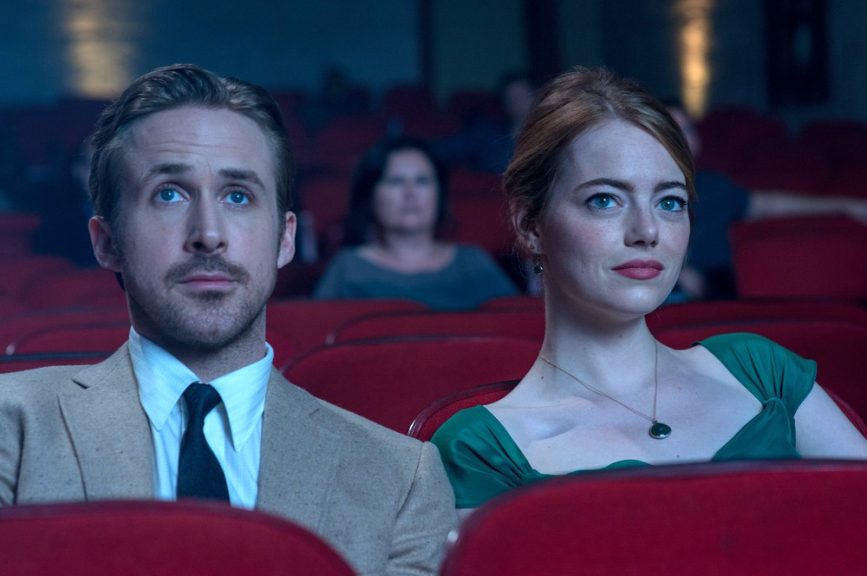 Written and directed by Damien Chazelle | 128 min | Netflix, Crave Plus and On Demand 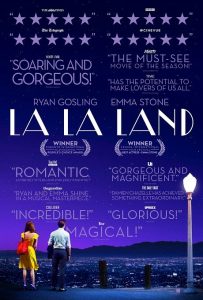 La La Land and Moonlight are in a two-horse race for award season glory at the time of this writing. The latter has already come and gone in theatres, but the former, after much delay and glowing reviews from elsewhere, finally arrived at a single screen in Bayers Lake on Christmas Day. This is Chazelle’s follow-up to the terrific, Oscar-winning Whiplash, but despite all the frothy acclaim, the picture doesn’t match the focus of his earlier film.

We start on a freeway in Los Angeles with commuters trapped in gridlock, all listening to different music in their cars, until one young woman breaks into song, leading all the drivers out into an all-out singing-and-dancing musical number. (Did I mention this is a musical? It is, with a lot of love for the MGM classics of yesteryear, The Umbrellas of Cherbourg, and Woody Allen’s Everyone Says I Love You.) It’s not long before Mia (Emma Stone) and Sebastian (Ryan Gosling), an aspiring actor and jazz musician, respectively, meet not-so cute. They don’t get along at first, but as they keep running into each other in parties and bars in a picture-book, candy-coloured Hollywood, they eventually spark. This is LA as if imagined by Jean-Pierre Jeunet, dreamlike and draped in murals and public art. It’s a joy to see.

The musical numbers are also a delight for the eyes, though a little less so for the ears. That opening number is bland and forgettable, as is the one following. Fortunately, there are two stone cold classics coming up, one sung by Seb called “City of Stars,” and one by Mia, “(Audition) The Fools Who Dream.” Those are the two that you’ll be humming and/or whistling as the credits roll. Gosling and Stone, already well-known for their chemistry thanks to Crazy Stupid Love and Gangster Squad, deliver a suite of terrific song and dance numbers together and separately. Gosling is especially convincing as a jazz pianist. 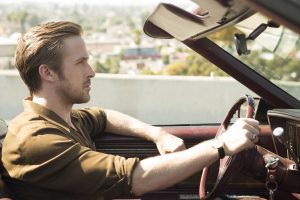 But the problem here isn’t the music, solid performances, or the wonderful magic realist moments throughout the film. The problem is a story that’s a little too thin to carry the magic.

At one point Mia and Seb say to each other, “I’ll always love you.” Really? The film doesn’t provide much evidence of their having achieved this level of devotion. We jump between seasons, so we get snapshots of a relationship, but we miss the meat of it. Seb, so determined at the start to see his dream of a jazz club realized, suddenly shelves his conviction to go on the road with a band and gets defensive when Mia challenges him on it. Why the sudden change in Seb’s attitude? The film doesn’t seem to know, or if it does it never bothers to tell us. Then, a scene or two later, after Mia loses confidence in her creativity, Seb steps up and gets her to a key audition. Does this change anything between them? Chazelle’s need to regularly jump forward in time skewers narrative coherence. 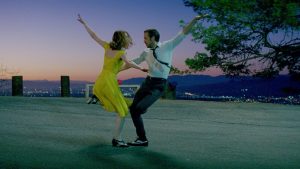 To compound matters, the supporting cast is wasted. Mia has roommates, while Seb has a sister (the criminally under-utilized Rosemarie Dewitt) and a musical challenger, Keith—John Legend, who gets one memorable speech, promising an exploration into Seb’s creativity that never happens. None of them manifest beyond a little “harmonizing” here or there.

Maybe Chazelle meant for this patchwork narrative quilt to be an impressionistic take, highlighting the romantic moments and the arguments, leaving the songs to provide the heart of it, like a musical version of 500 Days of Summer. It doesn’t quite work, leaving the film feeling hollow and incomplete, even as it wraps up with a lovely, melancholy what-if fantasy sequence.

There’s a lot to please the eyes and ears in La La Land, and it has moments of daring, especially where it allows a certain sadness to predominate, but if the film’s theme is that getting what you want often means you have to sacrifice what you love, I’m unconvinced.